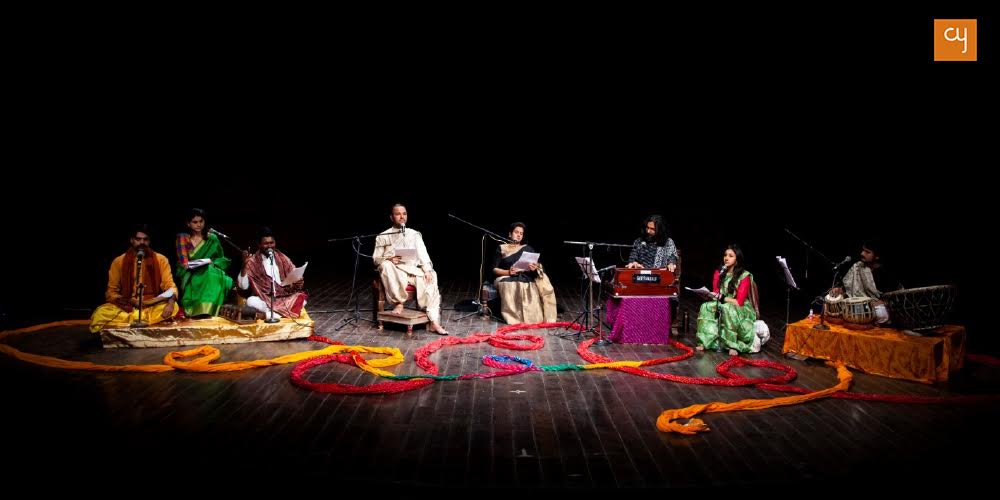 Vachikam for ‘Dramatic Reading’ has connotative significance. The shloka done before a performance attributes knowledge of the whole body of literature to Lord Shiva. Fanatika has a string of Vachikam performances on Gujarati literary works with the director’s attention to aspects other than those that were considered all these years in this subgenre. Angika remains absent, Vachika chiefly performs, Aharya assumes an extended meaning and they explore touching the listener’s imagination through suggestion.

Characters assume relatively distinctive contours in their latest Vachikam – of Kanaiyalal Munshi’s celebrated 1921 novel Pruthiveevallabh in a milestone of a dramatic adaptation by Prabhulal Dwivedi. The epic indefatigability of its hero Munjal (Chintan Pandya) and the epically human vulnerability of its beautiful Mrunalvati (Happy Bhavsar) get felt through their voice modulations in delivering the romantic novelist’s robust lines. What lends character to the performance at the same time is also the portrayal of other characters. They have been rendered strongly likeable with Munshi’s masterly verbal strokes and the players lustily bring them to life without being conscious of it in the performance in Bhargav Purohit’s maiden stage direction. 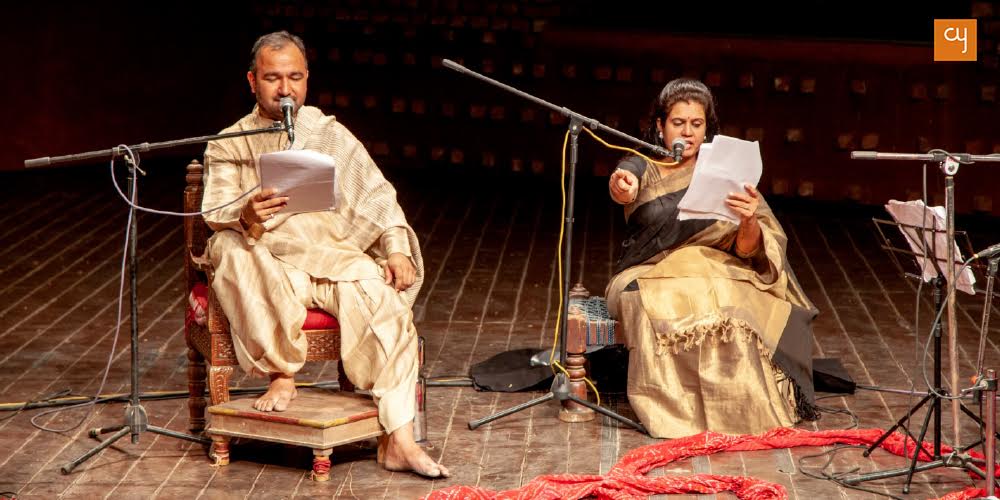 The most versatile among them is Maulik Nayak, who uses his voice in a variety of ways with dramatic effect to do small roles besides narrating the events and simultaneously giving dramatic soft rhythmic sounds on the tabla. Ankit Cristy as Bhillam shines out with his deep singing voice though he needs to learn the same depth for his speaking voice. With her playful and sharp visage, sweetly expressive voice and slender frame Dhwani Dalal is an apt choice as Vilas, the princess in her teens.  Jalpa Dave comes alive as the maidservant and other cameos with her endearing colloquial lines and speech mannerisms. Harmit Brahmabhatt is good as Yashvihar.

Popular Jooni Rangbhoomi songs Ek sarakha diwas sukhna … and Hrudayna shuddh premine … retained in the performance in their original compositions have an electrifying effect both for their philosophical overtones and simple rendering. Other tiny songs set to tunes by Bhargav have a delicate lyrical quality. His overall music direction, including soft metallic sounds highlighting dramatic moods, and stage direction, including the décor, costumes included, is noteworthy. His cool demeanour with a beard he sports pretty well suits his character of King Tailap. He needs dramatic variations in his speech though. 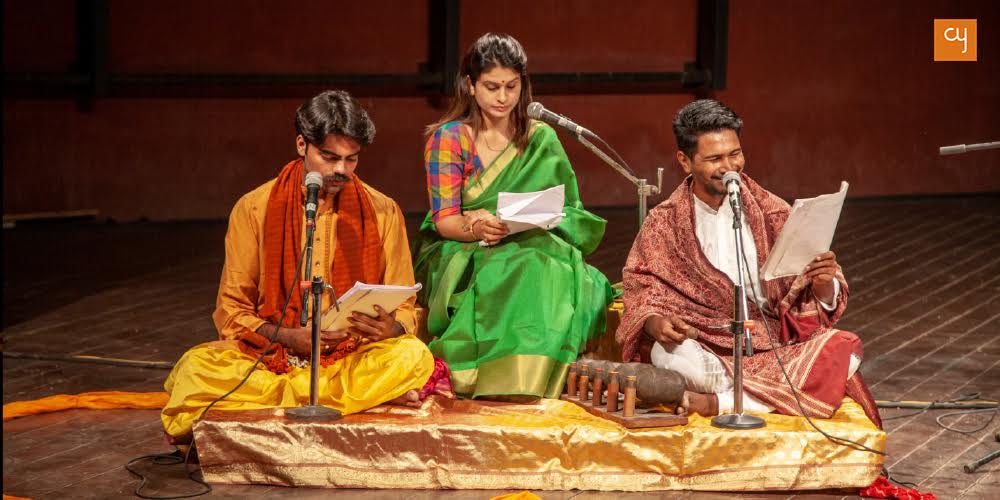 The thematic focus in Munshi’s Pruthiveevallabh is on the unusual combat between a romantically inclined virile invincible warrior king with a poet’s sensibility and an unyielding temperament and an exceptionally beautiful forty-year-old woman of royal lineage, widowed but dignified, conscious of the beauty as also the strength of character she is bestowed with and proud of her celibacy.  The outcome is as much of epic dimensions as is the combat. Munjal and Mrunal are a triumph of Munshi’s romantic creative imagination, romantic in being charmingly a bit unreal.

In the light of such distinctiveness of the two characters, a suggestion or two would be in place. There is scope left yet to elevate their qualities at a higher level. With manipulation of the voice through controlled dramatic inflection – variations affecting meaning – they can give a stronger rhythm to the flow of their interactive speech. Disapproval, anger, wooing and capitulation are expressed a shade differently in the royal ambience. Also, visualize the elegance of Mrunal’s beauty when she gets draped in spotless white! 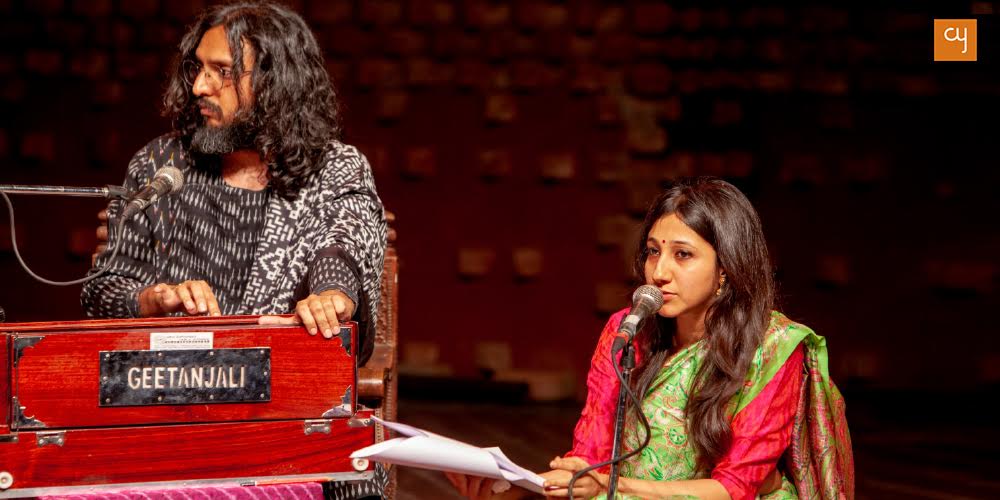 All the players incidentally are in costumes they are comfortable with and at the same time expressive of the personality of their characters. A Dramatic Reading need not have stage props. In this Vachikam, in front of the performance area remains lying zigzagged all through a colourful length of wound up cotton cloth, as of a turban, that serves many purposes. It adds colour to the space that could have remained dully empty. It signifies romance and the season for it to flourish. It keeps changing the connotation as the context changes. A viewer can imagine with it the iron chain binding the vanquished king. Well, its red gets the viewer to think of blood when an elephant tramples on his body. Fanatika Vachikam can be trusted to give visual glimpses as well.