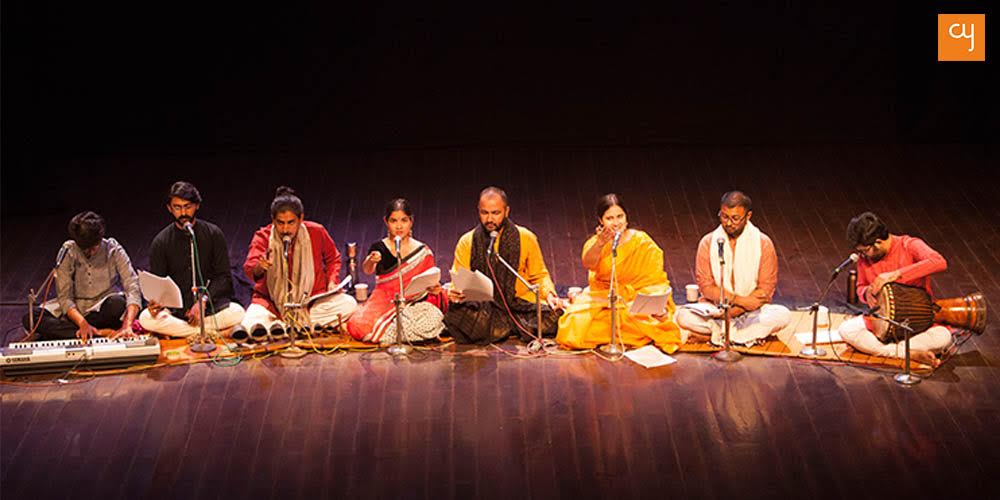 Karna stands tall and resplendent as a mythical character having metaphoric dimensions. Poets in major Indian languages are fascinated by this character and have endeavoured to project him in the modern context. ‘I have been living and will die,’ Umashankar Joshi’s Karna asserts, ‘to establish that it is by his deeds that man becomes inferior (heen), not by his birth.’ Hindi poet Dinkar’s Karna while in Kunti’s embrace for a while gets soft like the earth on receiving the first light rain shower but stubbornly refuses to let go of his identity mother Radha has given him. Even in that emotional moment, he won’t desert Duryodhan, who too has recognized and strengthened his identity.

Fanatika’s was only a reading performance of a slightly abridged version of the long narrative poem Rashmirathee under the direction of Chintan Pandya with eight actors all seated in a row (Natarani, Jan 13).  Judging by the listeners’ keen response to it all through and a standing ovation at the end, it remarkably succeeded in portraying Maha Nayak Karna, Kunti, Parshuram and Krishna besides other characters, the values he represents and their universal relevance, relevance particularly today when in public life birth and caste are deemed important and loyalty is changed, in politics particularly, like the shirt one wears.

The Mahabharata context is well-known.  Karna was a Kshatriya by birth and abandoned by his unmarried mother Kunti the newborn was picked up by Radha, a shudra, and raised with affection with no selfish end. He grew up to be a handsome valiant young man unconquerable with his skills in archery. At Draupadi’s Swayamvara he was with utmost humiliation declared ineligible for her hand as a sootaputra. Duryodhan accepted him and made him the king of Anga Pradesh. In the Kurukshetra war he could not kill Arjun but he is still being fondly remembered as a tragic hero.

With his sense for theatre, Chintan has been able to detect in the flowing rhythmic lines of the poem the colloquial, the dramatic and the assertive. He has culled them and carefully got them projected pretty well through young actors within the format of a vachikam. He breaks the lines and has them delivered with pauses and interactively; he has the drama built into the lines of the text strengthened with the right modulation; the assertion comes chiefly from Karna and partly from the narrator. Chintan, who portrays Karna, effectively uses his bass voice for assertion and has their modulation in relative control when three players (Nikita, Aditii, Chaitya) as Sutradhar take up the reins from time to time.

The boys (Aditya, Sarjeet, Rutvij, Nishit, Chaitya as Krishna, Parshuram, Shalya, Arjun, Kripacharya and Duryodhan) chiefly use hand gestures besides voice modulation and the two girls (Nikita, Aditi as Kunti, Dron, Indra and Sutradhar) bring into play varying facial expression as well. Nikita as Kunti noticeably gets interactive with Chintan’s Karna. All of them, in dignity, are fully involved and quite careful in rendering the lines with the rise and fall of their voice as the context demands. At the same time, there is still scope for the Fanatika director to organize a workshop in various aspects of voice modulation for them. They would enrich their performance if they learn to draw their voice from within.

Music and sounds are used during the reading. The lights dim at the climax. While Chaitya is at the Keyboard, Nishit has Djembe at hand. Occasionally, tinkling tiny bells, a softly louder bell and an alaap accompany the dialogue. At climactic moments of episodes, sounds dramatically build up. A welcome exposure to literature both for the actors and theatre lovers.