Day 2 of GLF Probes Our Shared, Flawed Humanity through Stories of the ‘Universal’ 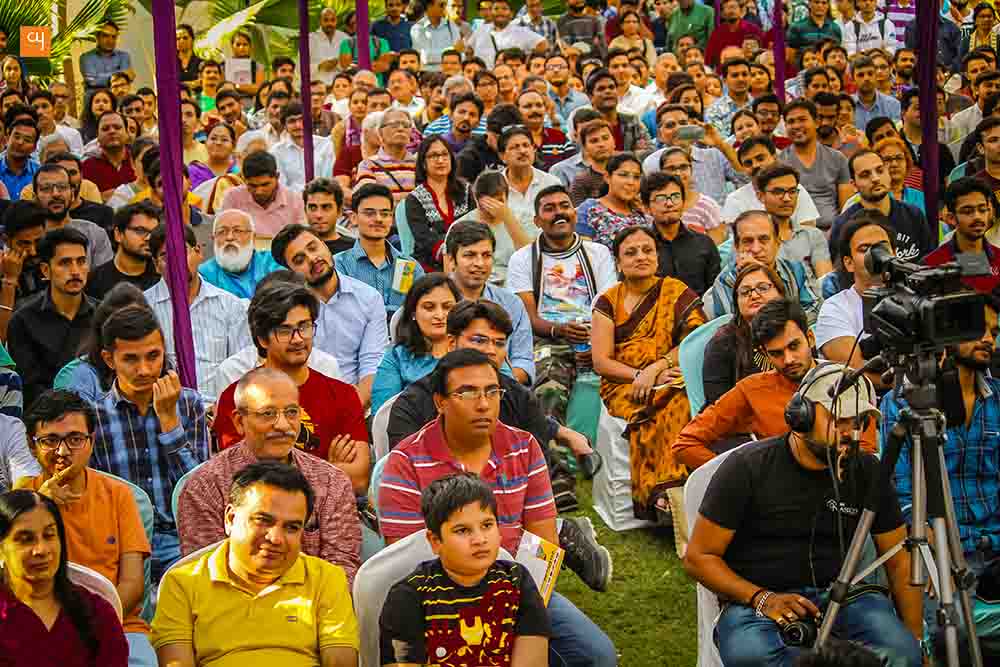 On Friday evening, in a much-anticipated debate concerning Gandhi’s alleged racism and casteism, author Rajni Bakshi had let out a clarion call against the flawed search for a “pure hero” that seems to underlie much of our criticism towards men like Gandhi when we notice them erring in their lives. This thread of thought concerning the fallibility of human nature stayed on with me well into Day 2 of the Gujarat Literature Festival, when I began to notice other literary discussions tackling the same theme, from various angles. 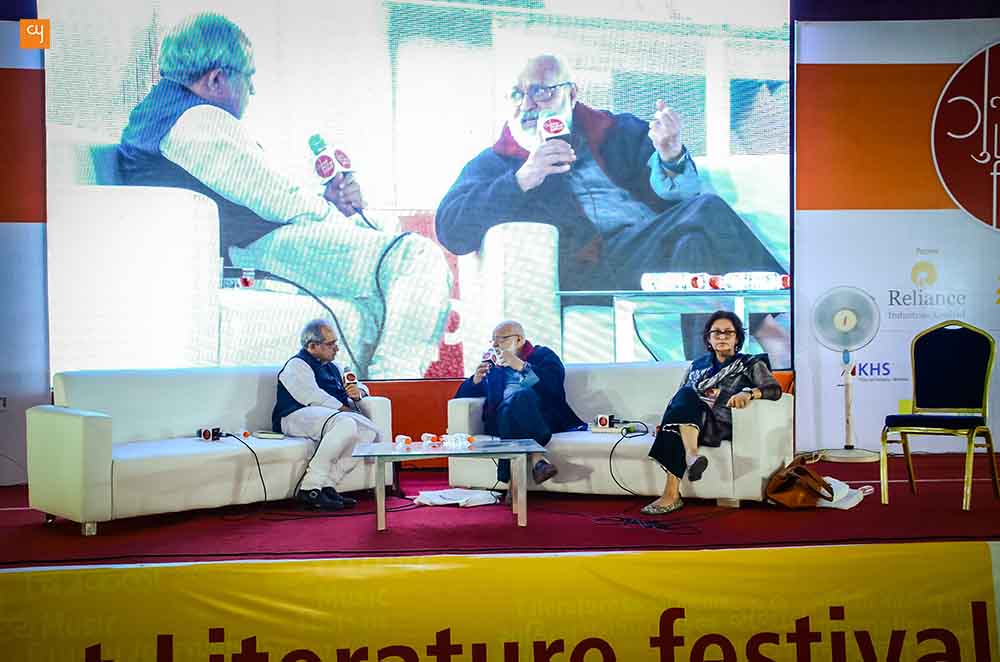 For one, writer Namita Gokhale – founder of the Jaipur Literature Festival – who was present to talk about her new book ‘Things to Leave Behind’, read out a passage in which her feisty Kumaoni female protagonist converses with Swami Vivekananda about cigarettes. The Swami admits to having fallen prey to similar temptations in his younger years. Through such a seemingly inappropriate observation about somebody whom we otherwise place in the legion of infallible “God-like” men, Gokhale asserted in her articulate style, “History changes with time, but we as people remain fundamentally the same… Our shared humanity is what novels and fiction can show us.” 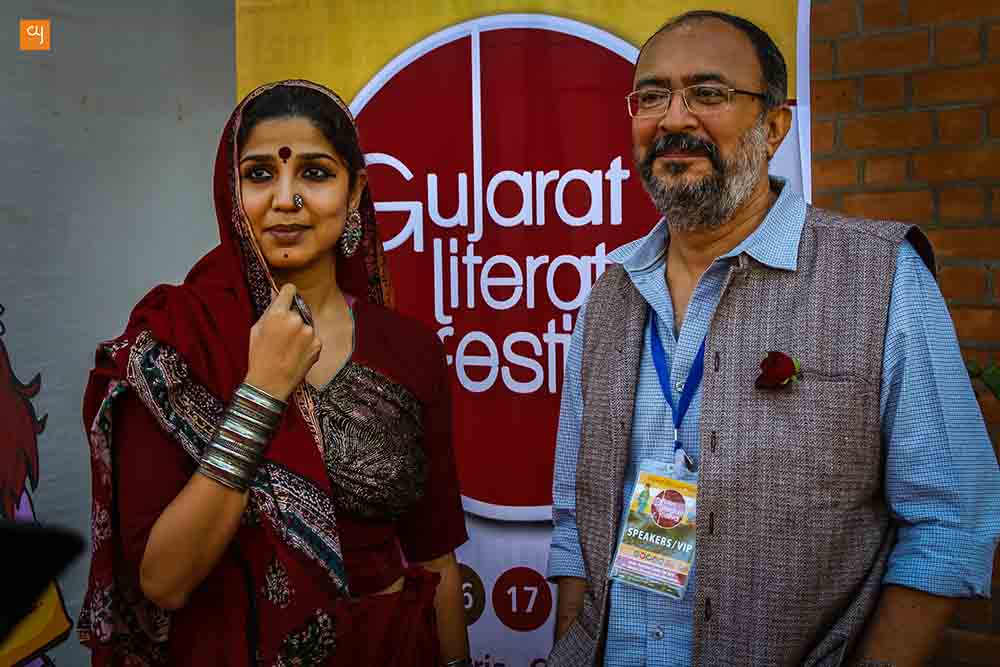 This notion of a shared humanity – that may be understood as a kind of universal ‘archetype’ – carried forth into several of the day’s discussions, centered particularly on mythology. Anjum Rajabali, the writer of Rajneeti, described how writing a film on politics did not initially interest him in the least until he realised over discussions that a central theme of electoral rivalry resonated on several levels with the story of the Mahabharata – with both dealing essentially with the theme of power. Just like Arjuna, who is the undisputed ‘ideal’ figure in the Mahabharata– reluctant to enter the battlefield until he is persuaded into it by Krishna – and has to ultimately resort to treacherous tactics to win his game; the central character of Samar in Rajneeti is one who is initially reluctant to step into power, for fear of corruption, but soon begins to revel in it.

The ancient stories of Ramayana and Mahabharata had been recounted for centuries, he said, in the process distilling the most archetypal human relations, till they were put down in written record by Valmiki and Vyasa. As a saying goes– if a situation has not been written in the Mahabharata, then it possibly does not exist. The archetypal feeling of ‘rejection’ is reflected, for instance, in a character like Bachchan’s Angry Young Man, Rajabali said, while a film like Roja celebrates the original spirit of womanhood that has so often been otherwise diluted by patriarchal reinterpretations of mythological texts. Suman Mukhopadhyay, writer of scripts like Herbert, spoke about the “Eklavya syndrome” – wherein minorities are seen to stand up for themselves – as reflected in films like Mary Kom. In fact, mythology runs so deep in India, he said, that certain people still practise archery without holding the bow with their thumb, in respect of Eklavya – the mythological representative of the minorities. As the two distinguished writers made eloquently clear – along with the lines of what noted mythologists like Joseph Campbell and even our very own Devdutt Pattnaik have made central to their work – when we perceive any experience with a degree of depth, mythological resonances are bound to surface.

Fittingly, this discussion was followed by a conversation in which a difficult expedition to Mt Everest was juxtaposed with verses from the Bhagwad Gita. ‘Everest’ is a book compiling101 painstakingly translated Sanskrit verses from the Gita, along with photographs from IPS officerAtul Karwal’s expedition. Anita and Atul Karwal realised the deeper spiritual significance behind such a mountaineering experience when they encountered the words of Dalai Lama –“the higher you climb, the further you seek.”Mt Everest is seen beautifully in this book as a metaphor for life’s hardships – that must be overcome by the human spirit. Like in the Mahabharata, where conflict is a central theme, the Gita as well teaches that there is oneness between outer and inner conflict. “Fear is the propeller of courage,” said Anita Karwal, “No matter how dangerous something is, the question about what you want to do in life is – does it connect you with the energies of the universe?” – a moving statement that resonates with mythologist Campbell’s oft-repeated phrase, “Follow your bliss.”

An altogether mind-expanding series of discussions this day, that truly touched not only the mind but also the soul, struck upon the underlying genesis of most literature and art – on that fundamental necessity to acknowledge a shared humanity – one that will equally bring us closer to our inner selves as to our outer pursuits, where our failings become opportunities for growth instead of being seen as moral corruptions, where – one story at a time – we are held by the hand towards a kinder, gentler place. As Namita Gokhale said, “Books are the most subversive creatures. They effect change – but quietly.” 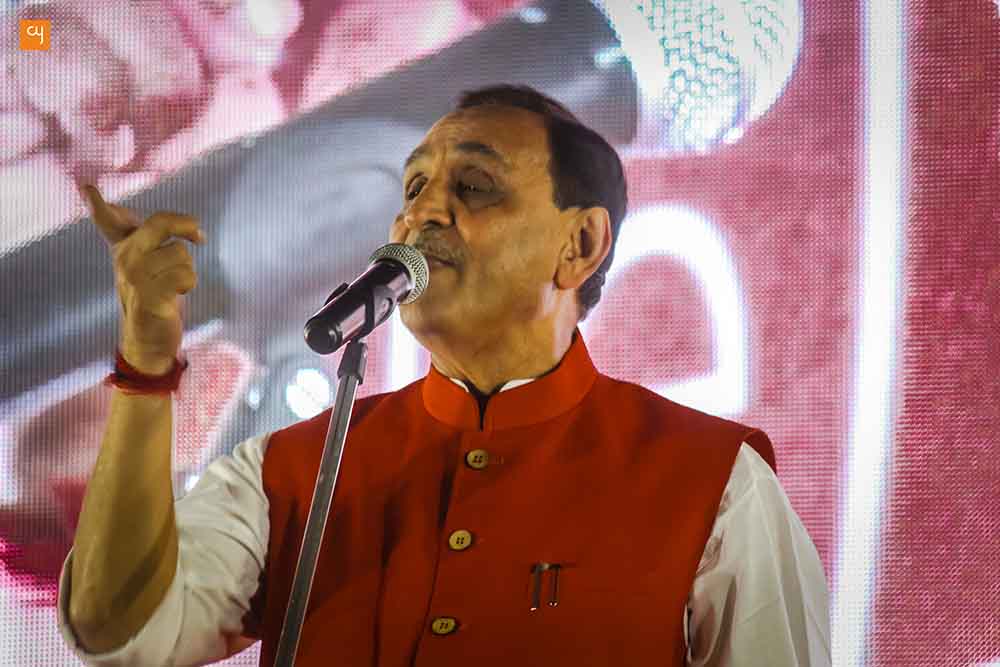 Day two was also underlined by the presence of Honourable Chief Minister of Gujarat, Shri Vijay Rupani. He seemed extremely pleased with the happenings. “I applaud the GLF team on behalf of Gujarat government. We had heard of Jaipur Literature Festival, but organizing the same in Gujarat for the fourth year in a row is really commendable. It is important to carry forward the culture of reading. Hon’ble PM Shri Narendra Modi devised ‘Vaanche Gujarat’ and got people reading and acquainted them with authors. Reading habits do give us much-needed focus. It is important to read and enjoy literature beyond school and college syllabus to get out of the routine of daily life,” he said. This was in keeping with Namita Gokhale’s astute observation earlier in the day regarding how literary texts appear to “lose their lustre” when made compulsory in academics. It calls attention to a larger appreciation of reading, which writer Anita Karwal rightly called “the greatest gift to mankind.”

The day ended with a stirring rendition of poetry merged with music, performed by noted Hindi and Urdu poet Irshad Kamil and his band Waahz. Hundreds swayed to the performance and in a surprising way it won the hearts of lit fest visitors. 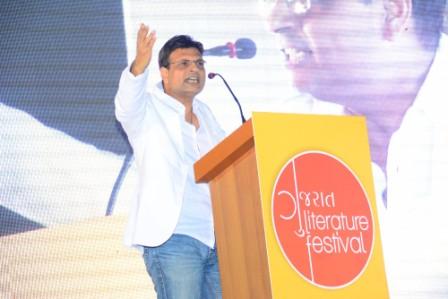