The Culture Talk is creating vibes and is here to stay 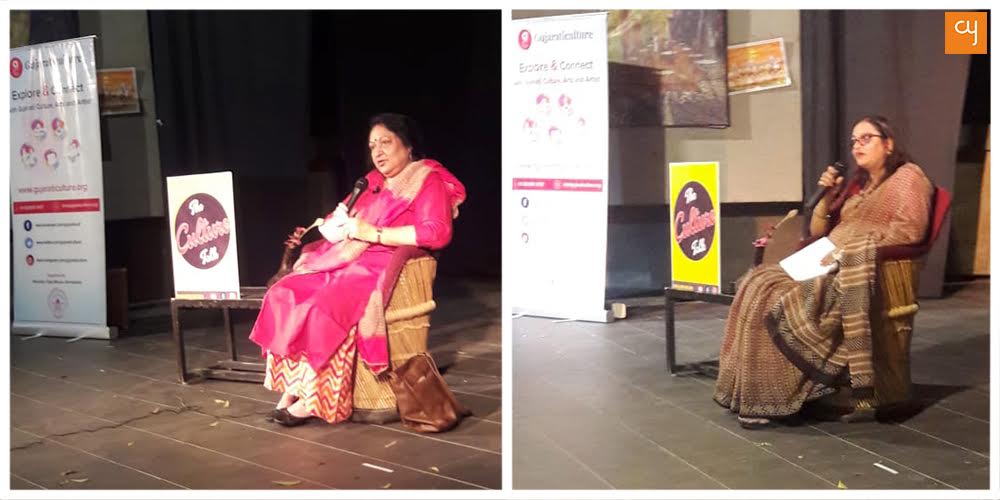 Scrapyard is a theatrical entity which grew out of the Rangmanal of Pritamnagar Akhada and has remained meaningfully active for some years now from the ‘yard’ like space in Paldi that specifies its name.

Besides plays and theatrical readings, it started a monthly series of live Culture Talks with writers, practitioners of performing arts, journalists, intellectuals and generally creative people of all hues, one may say, even as you can’t quickly recall a date with a fine artist under the series! But well while it is on for more and more to follow, it comes like a departure on Mehfil taken from a usual DD format, in that that the talker here is mostly asked to be on his or her own.

The thirteenth episode of the Series which came on the last Friday of February was made part of a weekly season and a special on creative women of the city as this will cut through the International Women’s Day and then stretch up to April.

While theatre worker Raju Barot was one of the firsts to be featured under the series, writer-activist Sarup Dhruv came in a couple of months ago and talked about the old city, nay the old world culture in the walled city in the wake of all the attention on heritage. Her conversation was brought in the context of her well-researched book on Ahmedabad, its heritage and history. So while on history, Sarup confirms in her chat that there indeed was a village called Karnavati that roughly habited around the present Jamalpur and that’s what was about it. Her research also confirms that Sabarmati was previously known as Shubramati and the present name is a colloquial evolution.

This was also alluded to by Subhash Brahmbhatt, an educationist in his talk even as he lamented that it takes foreigners for us to bring home the significance and worth of what we have in our cities for architecture and for our intangible resources and wisdom in scriptures.

To come back to the current “Ladies Special” season, the last Friday brought film professional-trainer Malati Mehta who also doubles up as an office-bearer of the Indo-Japanese Friendship Association and a resource person on the Land of the rising sun and also goes further in her responsibilities to help manage the Japan Centre at local AMA. It was an absorbing session while she talked of the Japanese culture and traditions.

Management Association interesting, but she excelled far more in creating curiosity when it came to her thoughts about the culture, tradition, social hierarchy and gender equations in Japan. She gave some astounding insights as she maintained that the Japanese had no qualms about the secondary role of women in the society and that there was nothing like a feminist liberation and empowerment movement as the women seemed to accept the conventional mould even now!

The women special season which will unfold now as a weekly event up to 5th April, featured Divyasha Doshi on Friday, the last. A columnist currently on issues about men and a writer of two books on gender issues for both women and men, she put in focus as to why there is a dearth, or even total vacuum in writing in this area? She was candid in bringing home the point that even men, in spite of the stereotypical facade of being machismo and strong, acutely faced emotional, behavioural and sexual issues. She left a question hanging in the air as to why many men do not write about men themselves.

Notably, the entire endeavour of Culture Talks has been documented from the beginning by the website www.gujraticulture.org and the resource in the form of videos is also available on its channel on youtube. A befitting arrangement that in keeping with the options available today for checking and rechecking things in one’s comfort.

The Culture Talk then has carved a niche for itself among the literati of the city, is about to stay here and is poised to make it a lot more interesting with a full season of limelight on women! There is an exciting line up of the speakers not of the fair kind but of the substantial kind. The lineup includes more of writers, theatre workers like Aditi Desai & daughter Devaki and three photographers including Meghna Sejpal on a single date! Do check out then the next episode with writers Pratibha Thakkar and Suhas Oja on Friday, March 8 at 7.00 pm.