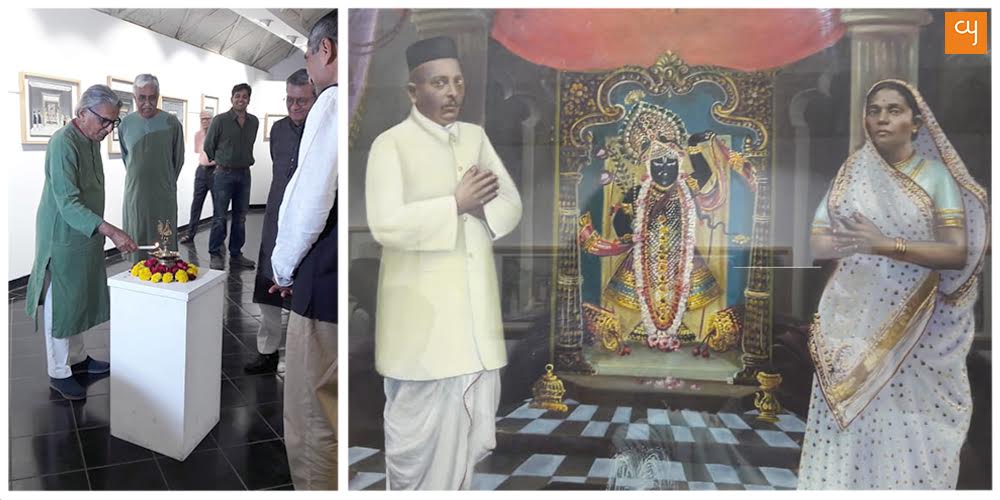 Shrinathji and works in Nathdwara School are two recurring themes for the art scene in Ahmedabad, thanks to Archer Art Gallery and the partnership between Anil Relia and Amit Ambalal. We have seen portraits of Tilkayat Goverdhanlalji of Nathdwara under Archer’s Indian Portrait Series Part II, a segment on devotional iconography and memoirs under Indian Portrait Series Part VII, Pichhwai paintings by artists like Trilok Soni from that region and even photographs of the Shrinathji Temple and Nathdwara town over time. All of these shows or their segments have had Shrinathji – Lord Krishna’s bal swaroop – and his abode in Nathdwara – also called Nandalya by some as against the description ‘temple’ – as the backdrop of the artworks shown.

The recurring theme comes to a full view yet again in the latest series in the class titled this time as Portraits of Devotion focused on the genre called Manorath. The show began at the Art Gallery in Amdavad ni Gufa on Saturday. The trigger for the show this time was some research leading to the publication of a book by researcher of South Asian art forms, a past visiting faculty in some universities of India and America, London bred Italian writer Isabella Nardi who delved deep into the collection held by Anil Relia and ended up writing the book with the same name The book published by Mapin was released just before the accompanying show.

One must put on record for posterity’s sake that Relia’s large collection of portraits acquired over time from random shops and flea markets in several cities lend themselves to many uses; which also keep evolving as he ideates incessantly; or because someone offers a collaboration and the several aspects that the same works can offer for viewing or research are showcased with a certain newness or in the renewed context. So also the current show, where you get to see a mix of familiar and unfamiliar works while the author gets her fulfilment and a reason to celebrate her book to be marketed internationally enabled by the invaluable collection!

Nardi who took the Nathdwara paintings as her research project under her special interest in North India and South Asian visual arts, relied on Relia’s collection of Manorath Paintings. While Manorath literally means a wish and a painting with this name signifies a thanksgiving by the devotee who comes for obeisance in Nandalaya Nathdwara followed by a portrait being done of the family, couple, friends at the venue, these works are described by Nardi as more than just souvenirs of the pilgrimage, and rightly so! She goes on for an apt description of the painting process calling the pilgrims as the subjects, patrons and consumers all rolled into one!

Looking at the works in the gallery is a treat in miniature forms even as they were made as hybrids using the photo-realism technique for faces of the subjects which would be cut out from photographs, pasted on the work and merged with it by the sheer artistry of the paints. The show includes some preliminary drawings and sketches which give a sense of how the process would begin. The works dating back to 1900 to 1950 in mixed media comprise of opaque watercolours, cut-pasted gelatin silver prints and gold on paper etc and depict for the backdrop several temple styles like the Chandan Haveli, the Garden Pavilion, the Marble Pavilion and the Palatial setting.

There are several combinations of pilgrims too in these works depending upon if they visited as couples, families with children, groups coming from far off places, or friends and sisters, all folding their hands and standing or sitting in deep obeisance to the Lord. Besides the patrons, the works also depict the principal priests like Goverdhanlal of Nathdwara and Ranchhodlal of Kota who would perform the Manorath for the yajman. The narrations point to the fact that Manorath would be offered on significant occasions in the Hindu calendar, viz the Gopashtami, Dusshera and other festivals, not excluding though the routine of ongoing visits. 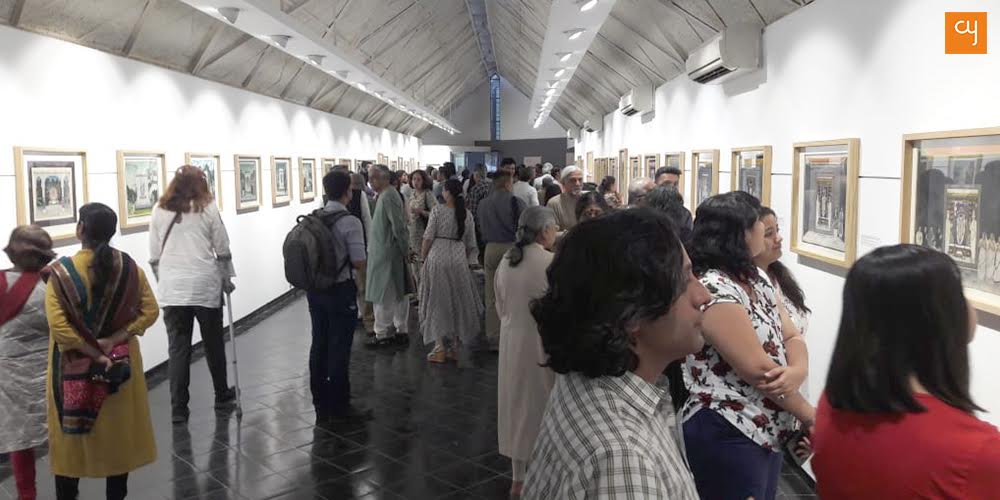 The artists of these works include Kanhayyalal Bhimraj, Ghasiram Hardev Sharma, Champalal Hiralal Gaud, Raghunath Sukhdev, Khubiram & Gopilal, Khubiram & Sons and even unknown painters, photographers and studios which had set up shop in the town during the period. A work or two also come from Kankroli town some distance away. The show also includes some of the allied works from Nathdwara School as part of the pushtimarg tradition, viz the Pratham Milan depicting Vallabhacharya – the catalyzer of Ashtchhap Poets – meeting the Lord, Krishna & Gopis and The Haveli Temple done in exquisite detail of the style.

A must show, this is on till March 10 between 4 and 8 pm at Amdavad ni Gufa campus.