Tanak Tum Tum magic theatre is capable of at Scrapyard 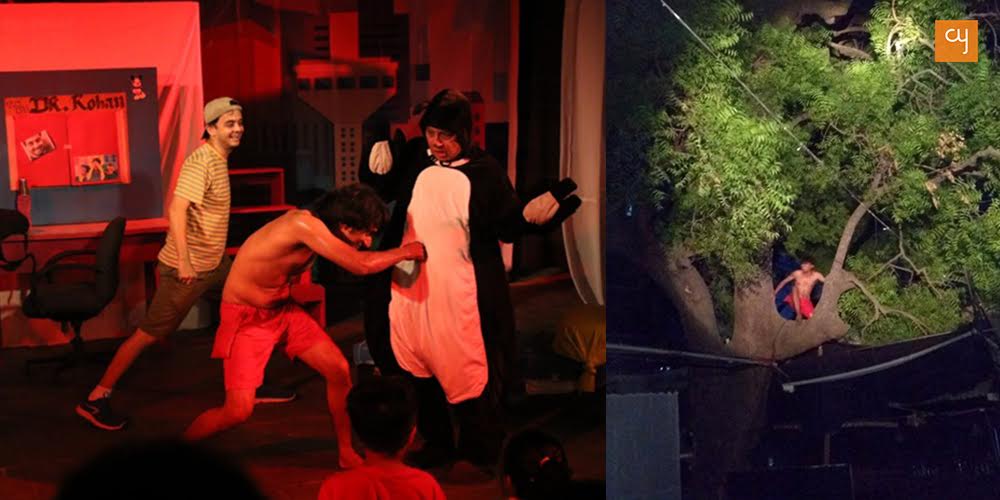 Kabir Thakore created Scrapyard – The Theatre a few years ago out of the scrap of his old bungalow. At this unusual theatre space now through a play he has written and directed for children and the child in us all, his four talented actors along with a large efficient team working backstage have been creating the magic theatre is capable of. Mowgli, the ‘man-cub’ that has grown up in the jungle, and Balloo, the kindly bear who raised him and taught the law of the jungle, stray into the ‘civilized world’ in Mowgli Balloo Tanak Tum Tum, a play produced by Dhiruben Patel. Their eyes roll on finding the world weird and they look at us the way we look at them.

They bring to this world the invigorating fresh smell of life they are fortunate to have in the jungle. They bring the tanak tum tum, that indescribable something within that gives us a feel of life when we slough off all the illusions of happiness and progress we live with. They mute cacophonous city sounds and get to our ears whoops and twitters, buzz and coo ooh. They make us look up at the sky luxuriating in the wealth of its innumerable glittering stars, the moon with its soothing silver light and the clouds passing by with no unseemly hurry. They bring to us the music of the stillness of night. They de-condition our taste buds and have us feel what could be the sweetness sweeter than the one in any tinned food. 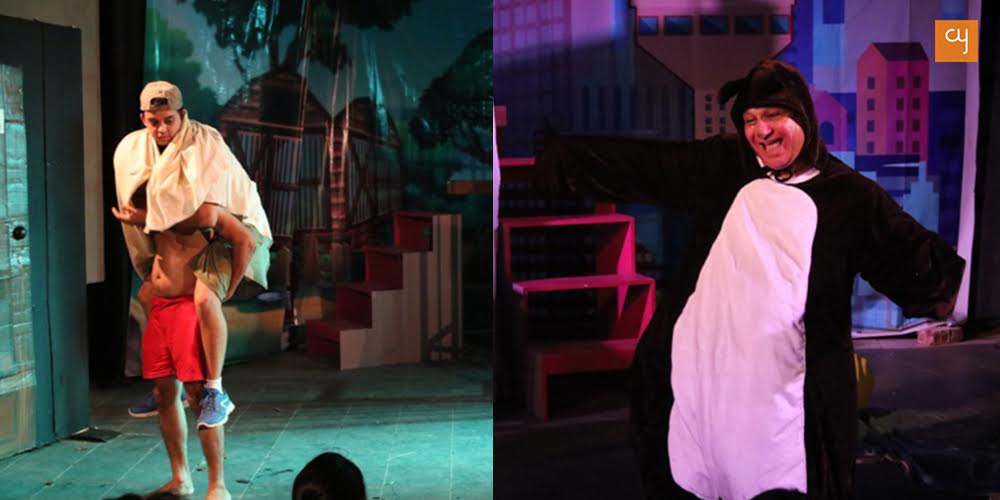 Children in the intimate theatre audience became something of actors themselves during the performance on the 14th. The rest tried to reach out to Archan’s Balloo, Sanjay’s Mowgli and Shivam’s Rohan, the host child, with shouts and cries, those in the front row loved to clap, touch and shake hands with them. They were thrilled to be with the fictional characters they loved and at times playfully tried to give a turn to the storyline. With complete involvement, they shouted out where the missing Mowgli or Balloo had been. They had deleted the invisible line between life and theatre! And the trio lovingly interacted with them physically and verbally, chattered with them and gently touched their cheeks.

And, tanak tum tum! The aliens turned loving friends hopped about and conversed with the boy from this world, singing playful songs and dancing, their eyes gleaming with curiosity. Hey presto, now they opened a flap here to a Planner prepared by parents with innumerable do’s and don’ts for Rohan and all those his age and now looked at a jungle of countless signboards and hoardings there put up on skyscrapers and on roads everywhere. Don’t hit the bed before doing homework, don’t oversleep; eat this and that, but don’t overeat etc on the one hand and for traffic and food and buildings on the other. ‘Crazy!’ Balloo in his inimitable style exclaims. ‘In our jungle,’ he proudly adds, there is complete freedom. He finds Pollution more ferocious than Sher Khan. 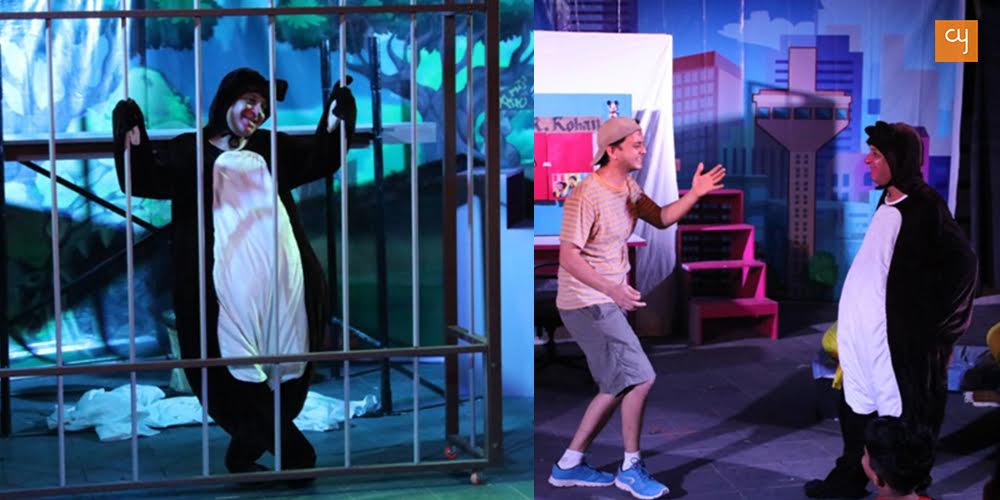 Acting comes to Archan as naturally as does breathing. From top to toe he is puffed up in black soft fur with a broad white stretch covering the chest, belly and loins. He hops about, bounces, sways and frolics. He gesticulates, grimaces, smiles and laughs. He speaks, sings and hums tongue in cheek. A darling of them all, children and their parents, though soaked in sweat all over that sultry evening, he waits for a selfie with them all.

With disheveled long hair, chest open, Sanjay as Mowgli somersaults, hides and climbs the tree and getting playfully interactive with Balloo, other characters and children in the audience he endears himself. A good young actor, he got into the difficult role at a day’s notice replacing Mayur. Shivam as the urban school boy Rohan looks having grown younger with his speech, action and curiosity in a short and a T-shirt. With a subtle dramatic sense, Ashish portrays cameos, of a recognizable watchman at the housing society and guard at the zoo for example, emulating their quirky mannerisms. With meticulous care and economy of space, Kabir has designed the set details. The costumes designed by Pauravi make the characters identifiable. Hummable playful songs have been composed by Mayank and rendered live by Kamlesh and his team with Nidhi and others as singers.