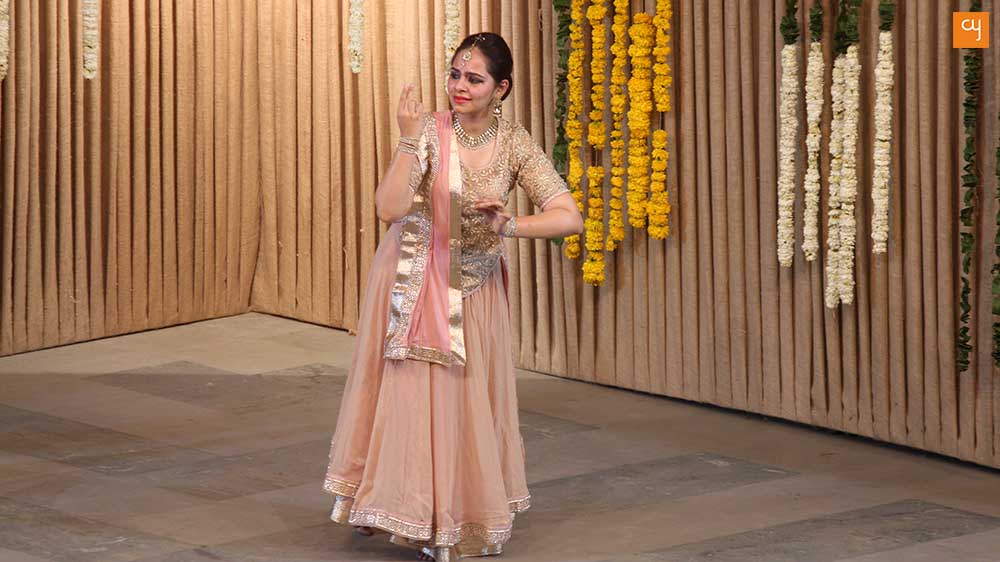 Rupanshi Kashyap’s Kathak being the very first recital on Thursday at Saptak, the Kadamb band of musicians chose particularly to present an Uthan for the audience to get warmed up for it. Rupanshi remained on stage, smiling in tune with the delightful rhythm, hands crossed.  When it was completed and applauded spontaneously, she had the presence of mind to go to the mike and say, still smiling, “I hope the time taken for the Uthan will not be taken into account in measuring the time given to me!” The viewers’ genial response added to the dancer’s glow and smile on her face and the rapport accompanied her all the way.

Rupanshi had the distinction of being the youngest dancer so far performing at Saptak. The city has already noted on watching her perform from time to time that she is one among a couple of emerging good dancers at Kadamb. ‘Dance,’ she is often heard saying, ‘is my passion.’ I have seen her grow since her teenage years. Two observations flash on the mind while watching her dance interpretation of the mantra-like lyric Shri Krishnam sharanam mamah rendered not as a chant but a solo by Prahar Vora. Her movement in depicting the chakra, the lifted mountain, his omnipresence and the like – not in the text specifically – is slow and dignified with the visual clarity as written words would have. The second, that twice she conjures up, in Guru Kumudini Lakkhia’s choreography, near tribhanga-like graceful posture denoting the worshipper’s humility and dedication.

Besides, as is characteristic of a Kadamb dancer, she seeks opportunities to cover the space the stage offers – as much in the lyric as in elements of Kathak like aamad, paran, tihai and Natwari she demonstrates. Her body remains elegantly upright, neck and chin held up with watchable dignity, footwork in measured rhythm and chakkars and udaans that are not done as an I-also-did mechanical requirement unhurried.  All this is potentially promising for the young dancer to fully flower up during the years to come.

Rupanshi’s abhinaya geet was bana bana dhoondhana jaau-n … Krishna here is the one in his youth playing pranks and getting romantic with the Nayika. Hiding in the forest, he gives a pleasingly difficult time to her. In the confidently done performance, Rupanshi looks more in a girlish than a youthfully romantic search. The age explains it but the area of subtly mature abhivyakti beckons to her and she certainly has reserves for it.

As always, it’s a pleasure listening to Kadamb’s musicians – Joby Joy on the tabla, Bhagirath on the sitar, Vanraj on the sarangi besides Prahar with his trained voice.