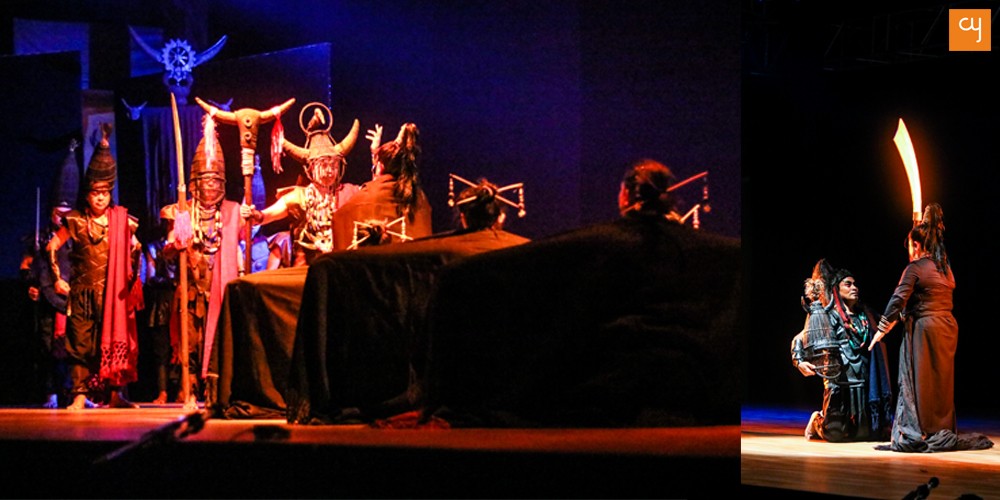 It was just as well that Ratan Thiyam’s Macbeth, SNA’s final performance at the Amphitheatre of the Gujarat University, was in Manipuri, the language nearly everyone in the audience did not understand. It was through its recurring strong visual motif that the play made its telling communication. The text anyway was expected to be known to the viewers and for its contemporary interpretation, no liberty was taken with the sequence of events. Many in fact could mentally recall the acts and lines of Shakespeare’s play in English as the impeccably built stylized scenes unfolded through powerful audiovisual clusters of images on the stage.

The central episode of the theatre wizard Thiyam’s adaptation comes to view in silence like a thunderbolt in its subtle unexpected connotation. Along with Macbeth in a hospital, nurses universally recognizable in spotless white uniform wheel in many other Macbeths, all bandaged and faceless. The real Macbeth, in the centre in his chair, breaks down like an adult child as the nurses point accusing fingers to him standing in a semicircle behind him for the infliction of pain he has himself invited. A little away on his left is Lady Macbeth, who in vain keeps washing her hand in a bowl offered to her. 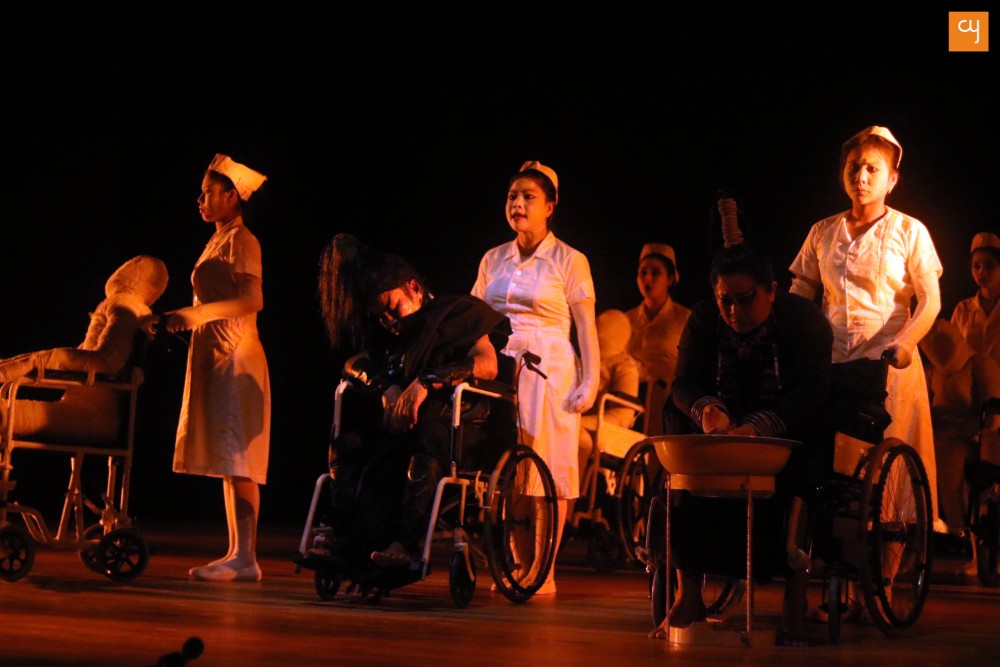 Images significant in suggestion abound in the play set it seems primarily in a primitive society rife with primitive instincts. The letter Lady Macbeth receives is of unusual size and length spread out in front of her. It is in hieroglyphic signs she pores over gleefully, gradually taking her eyes away from it, letting her imagination read between the lines and wrapping herself with it. Much later, the letter gets rolled out to Macbeth appearing to let his being take it in and gloat over all that he has himself written in it following the witches’ prophecy. The sensory images are dominantly dark. The dark colour of the costumes gets indistinguishable from the darkness of the night and the deep recesses of the mind. There are bursts of both the positive white and the violent red. The nocturnal movement gets enhanced with eerie nocturnal sounds. The witches have an elemental rise and form.

The virus of unlimited unhindered desires and lust for power has infected everyone everywhere in our time. Making way for them, human values fall by wayside. Other images all through the play keep reminding the viewers that this malady has for long been polluting society in contemporary times. The desire for power corrupts and corrupts beings irremediably, leading to disastrous consequences. Students of literature know King Duncan’s murder is the murder of trust, of loyalty and of all values. Tangentially, they are taught that the germ of ambition destroys the two characters.

Imphal-based Chorus Repertory’s director Thiyam’s originality is in creating telling images to convey a sense of the real contemporary social malaise spreading unchecked. The state of Denmark smacked foul in Hamlet. Two highly placed individuals of Scotland in Macbeth in the dark put out the light the conscience offers and get hurtled to their tragic ends. With a dazzling spark of originality, the director climaxes his perception of the theme of the play and prophecies foul turning fair at the end. Macbeth’s demonic image is demolished, its stinking remains are thrown away to be part of a heap of garbage and singing women sweep the polluted place clean with their brooms.