At the Symphony Orchestra of India’s premiere show in the city, Natarani Amphitheatre saw the entire passage of Western classical music, from the Baroque era to today.

The sound of a gong gave the signal for patrons to start taking their seats – yes, I am referring to the newly constructed, earth-red mosaic benches at Mallika Sarabhai’s Natarani Amphitheater. The Symphony Orchestra of India’s (SOI) premiere performance in Ahmedabad on September 28 was greeted by a full house of eager listeners. Although many of us have been exposed to Western music in films and media, there is still novelty in the Western symphony experience. It’s very different from the Hindustani classical tradition which doesn’t have the concept of harmony ingrained in it; in a Western classical orchestra, it’s indeed difficult to keep track of where the melody lies and what the main melody is. Listening to the Symphony Orchestra was a practice in keeping one’s awareness omnipresent while, at the same time, being present in the moment to appreciate the entire soundscape being created.

The vast stage had a minimal presentation, with simple chairs organised in the traditional half crescent formation of a chamber orchestra. The new and improved Natarani has drastically changed after its reconstruction. Where once there was the familiar backdrop of the river, there is now a textured wall with bricks jutting out subtly in mesmerising patterns. On the evening of the concert, pale fuchsia light washed the patterned wall, with its shade intensifying into a strong, royal purple as the orchestra members took the stage. Members of the audience fanned themselves with their playbills while the orchestra members, decked in full-length dresses and suits and loafers, stood in the searing stage light. It was quite a sight. The lighting shifted from purple to red to white to royal blue with every new piece, and sometimes between movements as well, though seemingly for little other purpose than to add to the theatricality of the performance. 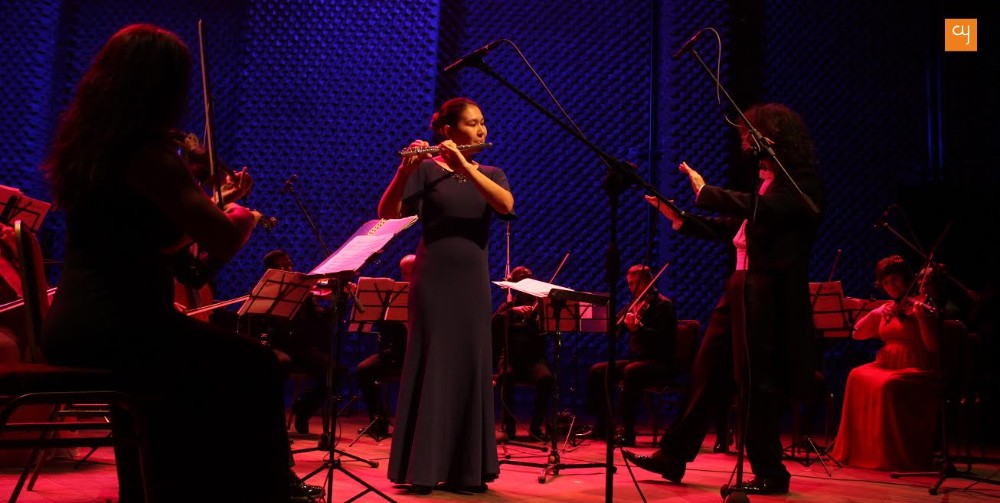 Established in 2006, the SOI originated in Mumbai. The pieces that were presented gave a brief overview of Western classical music over the ages. The concert’s cross-section ranged from the Baroque period to the modern period: from Bach and Vivaldi to Mendelssohn to Ken Jenkins. The chamber orchestra played beautifully, with exacting dynamics and heart-wrenching swells. It was lovely to see how they shifted effortlessly from synchronised, full bowing to quiet, intense, staccato. There was a great variety of music. The orchestra played pieces that almost everyone would recognise, like Vivaldi’s Winter from The Four Seasons, lesser recognizable pieces like Massenet’s somber Meditation de Thaïs, and also, notably, a Tibetan composition specifically arranged for the orchestra. The orchestra also tried to cater to the audience by playing a piece called Indian Summer by a 20th-century Indian composer, but I felt that somewhat disrupted the mood that had been created by the rest of the pieces. The piece neither featured distinctly Indian portions, other than a tihai in the end nor was very harmonically interesting.

In the end, the orchestra played Strauss’s Peasant’s Polka, which had the audience participate by joining into the singing. The conductor Evgeny Bushkov briefly taught the audience three short phrases based on the syllable “la.” The orchestra began with the jaunty number, which also included singing on the part of its members, while the audience awaited its cue. Halfway through the piece, Bushkov swung around and flared his hands, and the crowd erupted into a harmonious “la, la la la,” followed by a mirroring phrase played by the strings, and then the conductor gestured again to the audience. This call-and-response engagement lightened the atmosphere and helped the audience break down the usual ivory-tower conception that we have of classical music.

The pieces played by the orchestra also featured capable soloists on varied instruments: the violin, flute, viola and oboe. The oboe player, in particular, should be lauded for his moving solo in the composition Gabriel’s Oboe, for which he kept a meditative, even tone, giving sparing touches of vibrato to ornament where necessary.

As this was conductor Bushkov’s first concert outside of Mumbai, he may not have realised that many people in Ahmedabad had never seen a symphony concert before this. There are certain standard templates under which most classical music is sorted. Customarily, classical music consists of several movements. Like the chapters of a book, which serve to expose different layers of a story, the movements of a concerto represent diverse facets of an overall composition. To mark a transition, there is generally a momentary pause between the movements, and concert etiquette has it that the audience must hold its applause until the end of the movement. But at Natarani, there was raucous applause between each of the movements despite subtle gestures from the conductor to stop. Though this is a faux pas that most first-time listeners would not have been aware of, the conductor could have avoided it by beginning the performance with some basic training on how to appreciate chamber music.

In addition to Natarani’s upcoming lineup of plays, festivals, and performances, SOI will be appearing here at regular intervals. You can find out more about becoming a member on Natarani’s Facebook Page under the name ‘Natarani Amphitheatre’. They have several offers on membership, through which you can enjoy programs like jazz festivals, inspirational talks, and multilingual plays. It’s bound to be a season chock-full of culture, art and learning for Amdavadis.