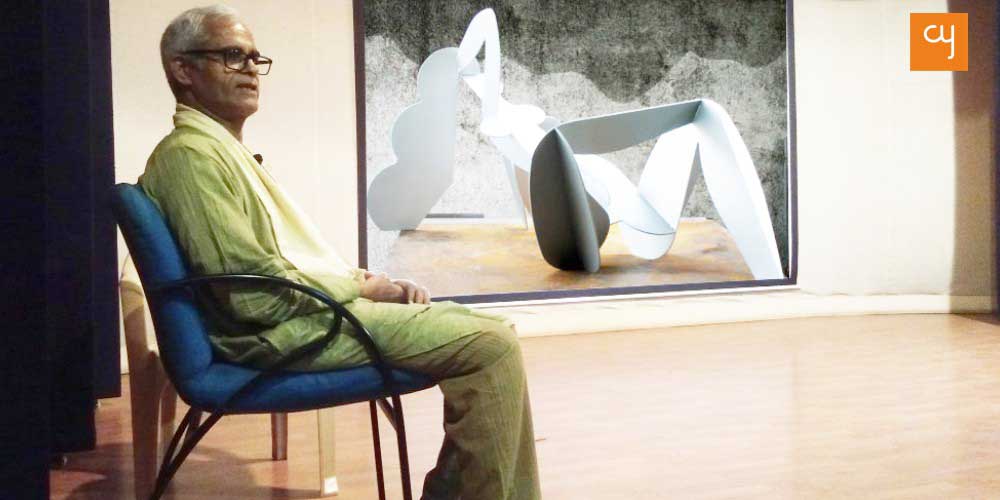 Internationally acclaimed sculptor and former dean at the Faculty of Fine Arts of MS University, Vadodara, Dhruva Mistry, speaks about his perspective on practical art and carving experiments. His exceptional insight on, why size matter and how sculptures can be utilised as an architecture.

A single thought struck my mind after listening to Dhruva Mistry’s artistic journey at Vishwakosh–that if everything is foreseen, then there will never be imaginations, and the joy of relishing the sweet and sour surprises of life will remain unborn. Mistry has a mind full of aesthetics, and art full of surprises. He was invited at Gujarat Vishwakosh Bhavan by Vishwakosh Lalitkala Kendra to share his journey as a sculptor on 22nd April 2017.

Portraying his artworks, Mistry fluently explained the ideology and etymology behind each. His artworks are always a manifestation of architecture – a result of constant questioning about whether they can be practically used by people or be formed into pieces of infrastructure. Like his steel made reclining human figure that has been designed to look like a blue print of an artistic building hints a reflection of imaginary ceilings, corridors and ramps. His interdisciplinary stance between art and utility is one of the reasons, why this sculptor’s name is flourishing across the globe.

Sometimes, he tries making the same designs in different mediums and different sizes, just to know whether the design is flexible enough to be moulded into something different. His comment on size left an everlasting impression on the audience – “Remember the young elephant sculpture from Elephanta Caves that is now installed at the Jijamata Udyaan, Mumbai? It was made in the size of a real Madanyu (young elephant) because the animal figure sculpture should always reflect and imitate the original formation of the animal; just like a house always has a doorway to enter, and not a window or a gateway. It is perfect for the size!” Mistry’s sculptures depicting men in swastika shape, who portray the five elements of life (Space, Air, Fire, Water and Earth), are now standing in glory at a Public Park in London.

While looking back on his journey from Ahmedabad to Vadodara to the Royal Academy of Arts, London, Mistry shared, “I was the first in my family to opt for creativity as a profession. I was advised to get admitted to MS University by Praveen Patel, my favourite professor, who realised my passion for sculpting. He warned me that sculptors don’t earn a fortune, but I was already mesmerised by the tempting liberal environment of MSU. But more than just the casual relationships between the students and their professors, it was the liberal perspective towards carving that I enjoyed learning. It was tough for me to commute to Vadodara in the 90s, since those times in Gujarat were severely sensitive to riots.” Society, at the time, thought of art as an underpaid and unacknowledged profession, so when Mistry got admission into the Royal Academy of Arts, it bewildered many in the creative fraternity. “I was given a bursary to continue my studies in London and, over there, I learnt to think beyond conventional methods. I used stone, wood, bronze and plaster cast, and started adopting Asian, Middle Eastern, European and Indian skills of carving, casting and assembling sculptures.”

Mistry has, till now, participated in more than 20 solo shows, and his sculptures can be found in public collections across India, England and Japan. His Public Commissions include prestigious projects at international venues like Victoria Square, Birmingham, Peter Moores Foundation, Liverpool, LNG Petronet, Dahej, Gujarat, Nitchiman Corporation, Japan, Delhi University and many other places. He has been honoured with various accolades, including the Award of Excellence by Gujarat Gaurav Samiti, but we still think that this legend deserves more superior titles, for his contribution towards advancing Indian art in various countries.