Art has myriad meanings and is interpreted in many ways. Thus when artists themselves talk about their art, their inspirations and the thoughts behind it, it becomes much more noteworthy.

Kanoria Centre for the Arts and Coffee Mates gave Amdavadis the opportunity to listen to some of the most influential artists of our times with a trilogy of Lecture titled ‘Arts and Artists’. The lectures started with a Lecture by Prof. Prabodh Parikh on the 20th of February, was followed by a talk by Atul Dodiya on the 6th of March and concluded with a talk by Shri Amit Ambalal on the 9th of April. The lectures were held in the lecture room of the Kanoria Centre for the Arts and were organised by Aruna Mehta of Coffee Mates.

The series started with noted Gandhian Prabodh Parikh, who is a poet, short fiction writer and visual artist. He retired as the Head of the Department of Philosophy form Mithibhai College, Mumbai. He is currently Faculty-in-Charge of International Art, Literature and Culture, Whistling Woods International, Mumbai. He gave a lecture titled ‘Face to face with Rabindranath Tagore’.

The second lecture in the series was by Shri Atul Dodiya, who is one of the most celebrated Indian artists today. His style is constantly evolving and he is deeply influenced by what he sees and the world around him. These have an impact on his work in myriad ways.

His paintings are permeated by diverse thoughts, images and imprints; these can be images from the media and news, the written word, images of saints, legends and the common people; national history and political events to autobiographical vignettes. All of the come together in works to give us an interesting, intriguing and enthralling look at the world around us.

In his lecture, he talked about his journey to becoming an artist, his family and influences. He talked about his work from the 80s onwards and his evolution as an artist. He gave a chronological glimpse of his artworks and talked about the influences, processes and thoughts behind them.  This included his works on canvas, his installation as well as the famous shutter series’.

The lecture series was concluded by Shri Amit Ambalal, noted Ahmedabad-based artist. He didn’t have any formal training in art but was guided by veteran artist and teacher Chhaganlal Jadhav, he left his business to focus on art in 1979 and since then his work has been displayed across the world and can be found in many important collections. 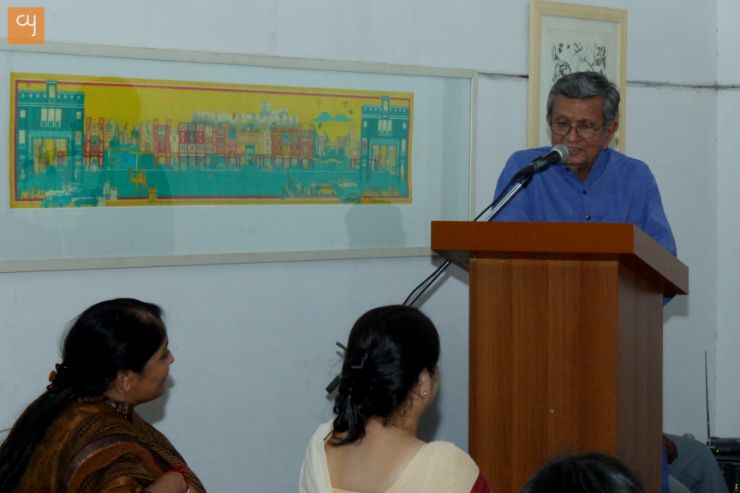 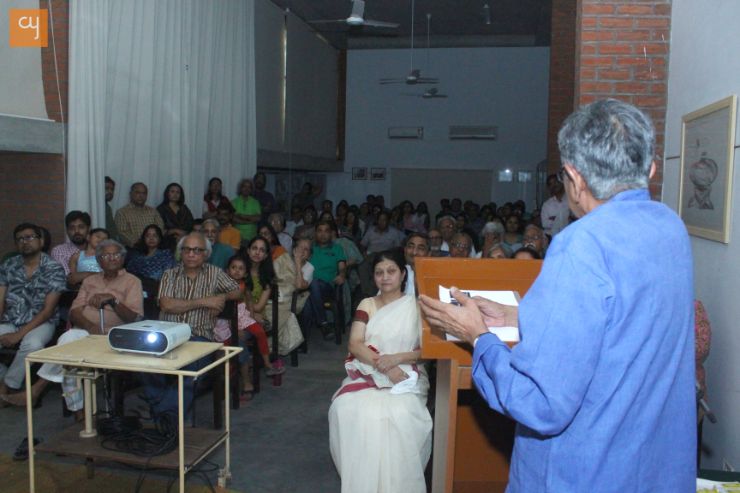 He is a collector of miniature paintings and Pichhwais and these traditional art forms have influenced his work. Born and raised in Gujarat, the influence of the state can be seen on his work. His works are inspired by memory, experiences and events form daily life. He took the listeners through a journey of his works, starting in 1970s. He talked about the events and stories which influenced him and the imagery he used. One can see a reflection of his keen observation and wit and humour in his works. 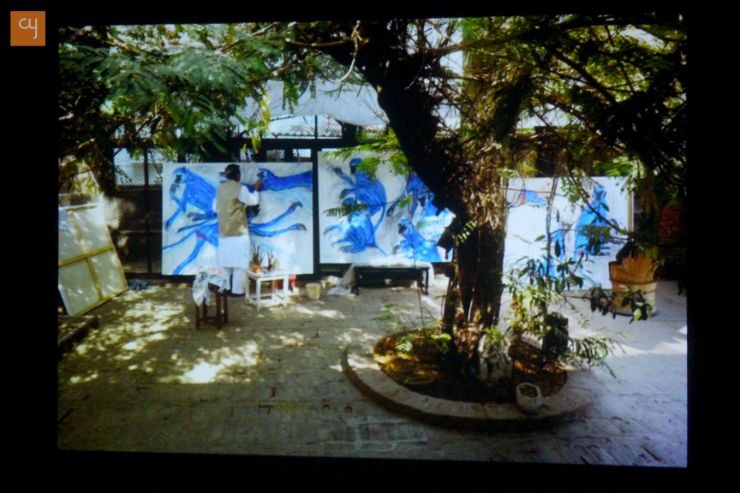 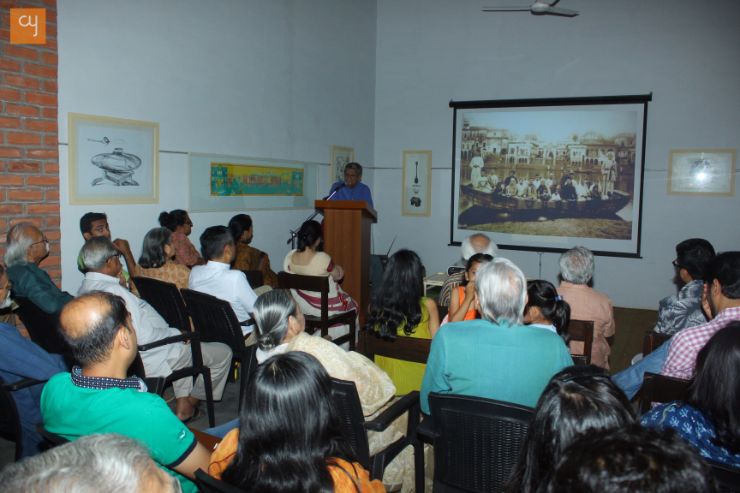 The lecture series was a resounding success and the lecture room was full to the brim with art enthusiasts and listeners. Gargi Yadav, the Hon. Director of Kanoria Centre for Arts says “these sort of lecture series don’t happen very often and this series has turned out to be a real success. The audience included people not only from the art world but beyond. Listening to the artists was very inspiring and learning that such high calibre people are so down to earth is really inspiring. Want to do more such events.” 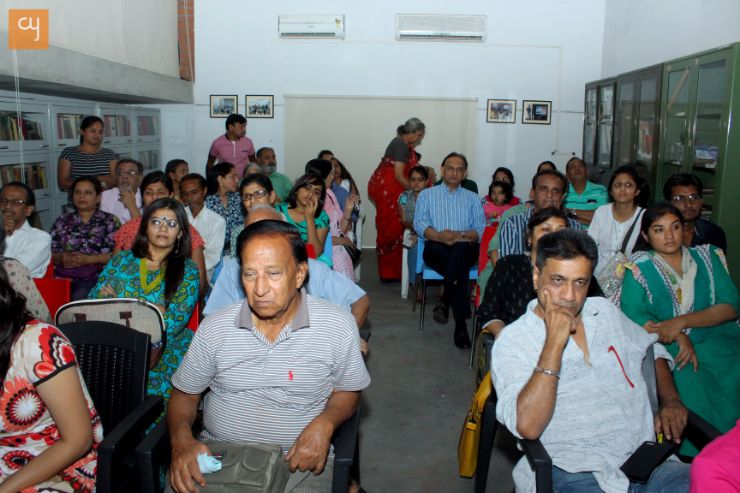 Shri Ambalal said “the lecture series was very nice, very intimate; the artist doesn’t feel that he is speaking to a crowd but can feel its pulse, this kind of set up is very workable.”

Overall the lecture series was a great experience, and it was encouraging to know that such great personalities are so down to earth. We hope that more such events take place in the future and kudos to the Coffee Mates and Kanoria’s Team! 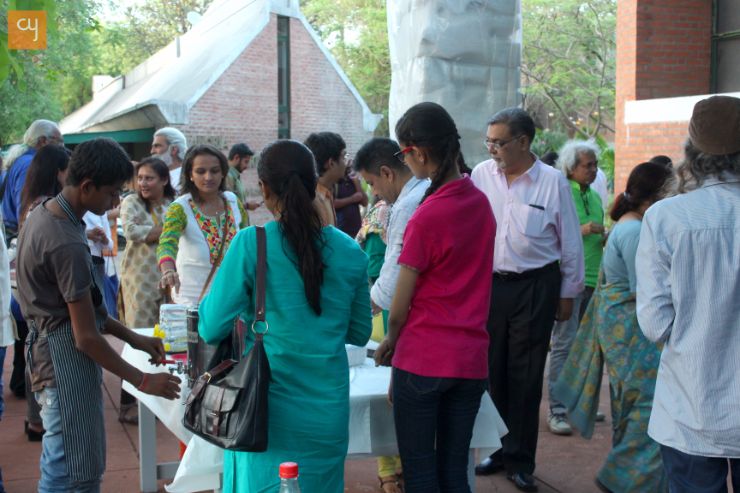 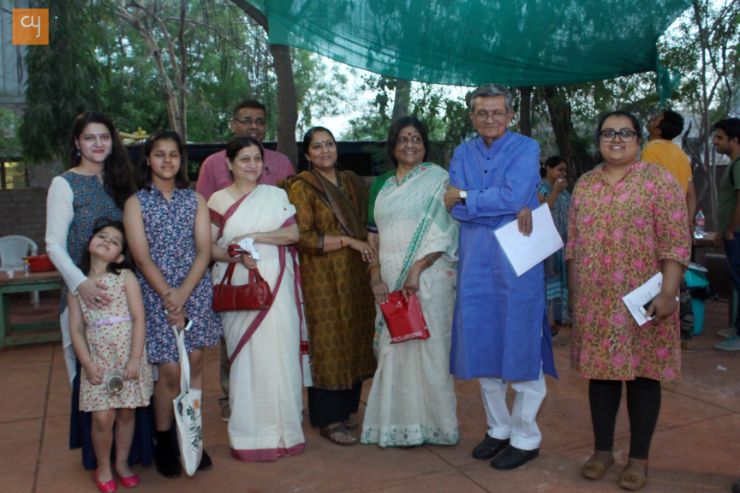