When 275 People are Handed 275 Cricket Bats, See How Art Happens

“You may love cricket, or hate it, but you can’t run away from it,” said curator Nayana Soparkar of Mantra Art Gallery, who distributed 275 bats amongst people to paint. All housed under a single roof, this exhibition of bats displays the wonders of ‘Contribution Art’. It isn’t the first time that Nayana Soparkar has compiled a collaborative art exhibition. Two years back, her display Chhoti Rickshaw Baddi Savari left connoisseurs awestruck with its collection of 91 painted miniature auto-rickshaws.This time, too, you can experience an essence of Indian-ness through the amalgamation of cricket and art. Displayed on the 5th floor of Meghmani House from November 5 to 12, and later at Mantra Art Gallery from November 14 to 30, the exhibition is open in the evening hours. 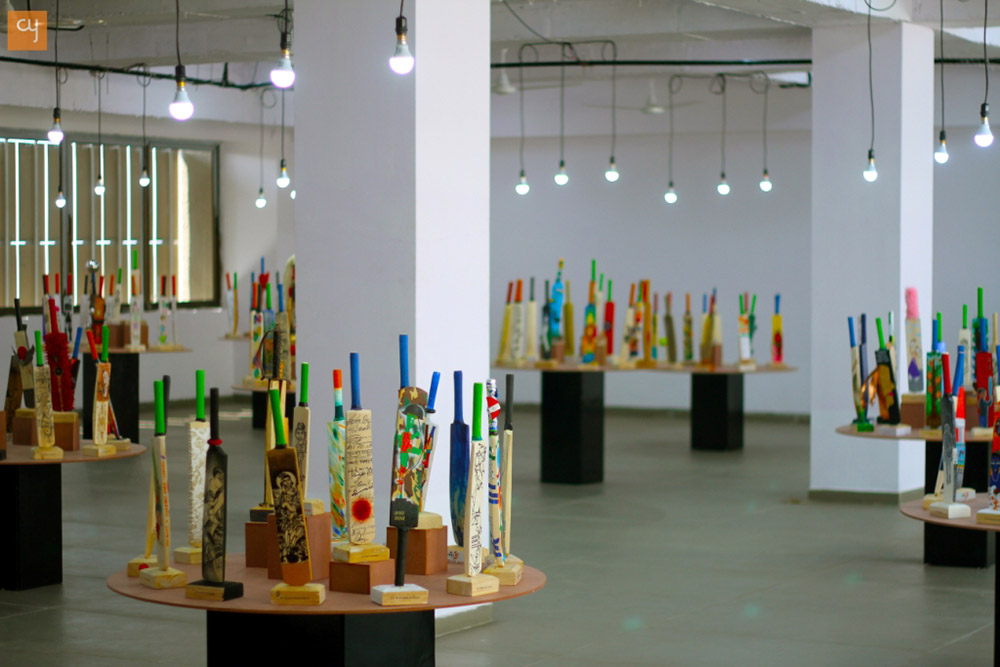 To achieve this curious exhibit, the 275 bats had been divided amongst 18 different groups – each like a cricket team with its own captain. The contributors were pre-decided by the curator. Her list called on people from varied walks of life – children from municipal schools, artists hailing from Delhi to Visakhapatnam, celebrities, business people, housewives, RJs, inmates of Sabarmati Jail, as well as Soparkar’s own family members. Children’s filmmaker Amole Gupte, child actor Khushmeet Gill, and artists like Smita Biswas, Ami Patel and Jayshree Gondiya have also contributed to the collection. As also has cricketer VVS Laxman, who will be inaugurating the exhibition on November 5, 2017. 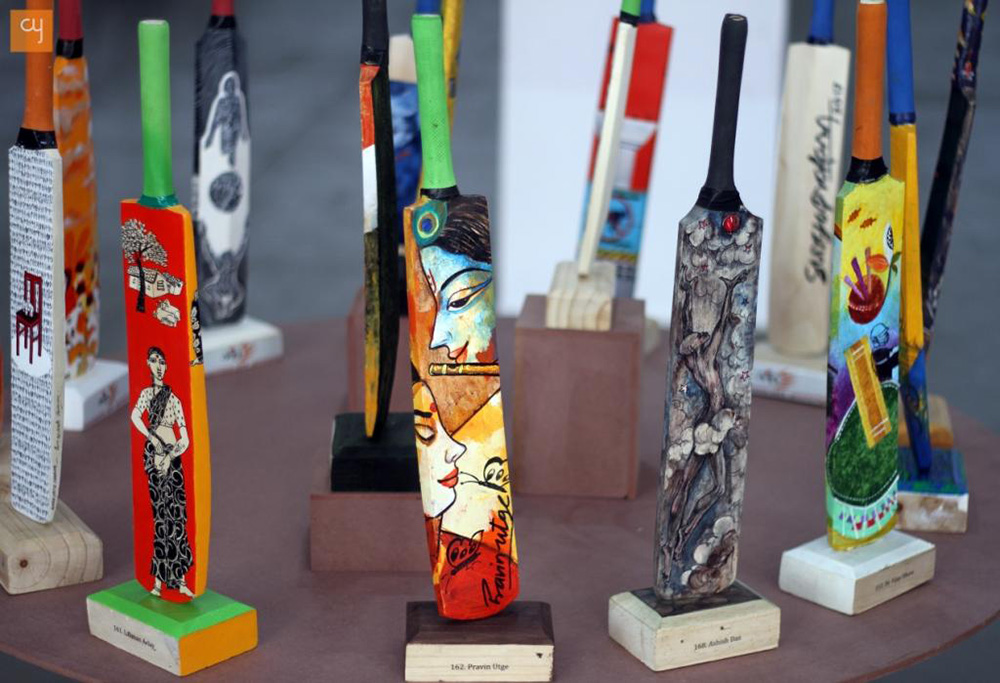 The best part of the exhibition, of course, is that the bat artworks haven’t been contributed only by professional artists. The aesthetics haven’t always been preconceived. Everyone has used the bat as a space to express his/her thoughts. Inmates from the Sabarmati Jail have portrayed social messages, while CN School of Fine Arts students have transformed the bats into an installation. Some have even been able to narrate stories through their artworks. One cricket bat, for instance, nostalgically carried me back in time through its list of gully cricket rules, which included a special ‘lollypop ball’ for kids. Another cricket bat had termites on it, depicting one person’s shattered childhood dream of becoming a cricketer. Since I am personally not a cricket fan, the most fascinating work for me was of a cricket bat enveloped by a tree bark. It seems the artist is so uninterested in cricket that he decided to convert the bat back to nature’s monument, a tree. While many of the people who participated have considered the cricket bat as an alternate medium, some have also gone beyond looking at it as just a ‘medium’. Both these expressions have found evocative manifestation, which I believe makes for the real success of the show. 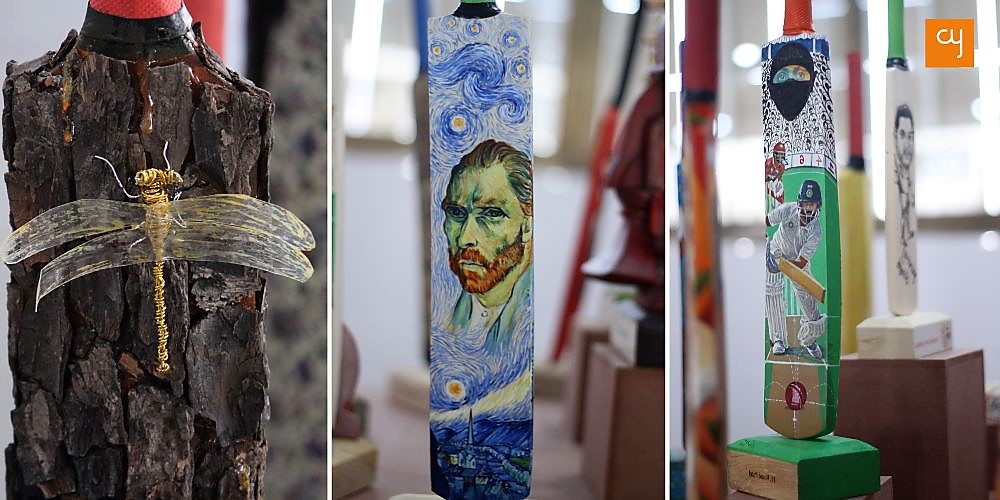 Nayana Soparkar, whose work has been honoured by the national body of All India Fine Arts and Crafts Society (AIFACS) shared how she came up with the idea for the exhibition, “Mantra Art Gallery is completing its 10th anniversary this year and so is the Indian Premier League. I wanted to adapt their concept of ‘Ye Dus Saal Aapke Naam’ (These Ten Years Are Dedicated to You) for Mantra, since it is the trust and belief of the people that has sustained the Gallery.”

The cricket bats have been custom made from Meerut, exclusively designed for the art exhibition. “We tried the Kashmir Willow as well as English Willow before settling on these 17.5’x2.75’ sized bats. The wood was feasible and qualitative, and the delivery of the commissioned bats was also time-bound,” said Soparkar, while holding her own designed ‘Swachh Cricket’ bat. She took eight months overall to curate this public engagement art show. And I must say, the show has achieved a lot across all parameters. 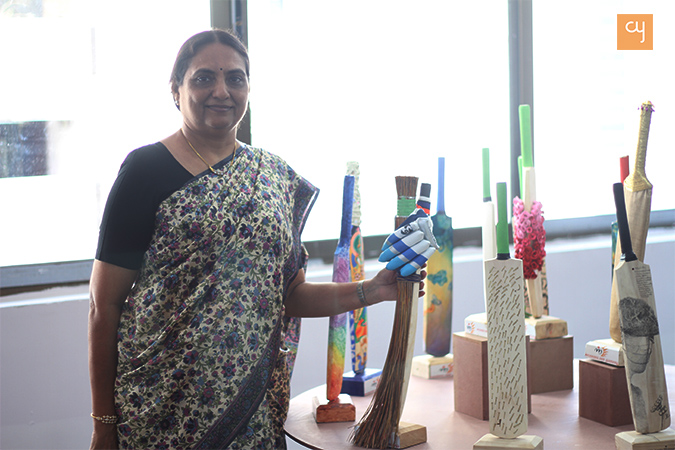 Why does one go to an art show ? – to engage with art, to be enveloped by the beauty of aesthetics, and to find an individual connection with the artist’s expression on canvas. Soparkar’s ‘Chhota Bat Badda Score’ does this and much more. One, it completely alters the perception of the ‘cricket bat’ for the viewer, two it gives the artists a fresh new medium to express and three, most interestingly it brings to fore, diverse perspectives about people’s connection with the most popular sport of the country. It is amazing to watch a common form – the cricket bat – transform into an unfamiliar medium of artistic expression. And hence even the works from seasoned artists, has attained a certain zing, thanks to the ‘chhota bat’.

Soparkar is a self-taught artist who grew under the mentorship of artist KD Parmar, for 18 years, whereby she learnt one of the most difficult forms of art, Sculptures. She is the only artist in her entrepreneurial family. But, curiously, she wasn’t always a right-brained person. In her initial days, in her words, “I was a studious pupil, who scored good marks in almost every subject. But my overall grade would always drop because of low marks in creative subjects of art and music, primarily because of my lack of interest in them. It was after I became a housewife when my youngest child started going to school, that I decided to fill the vacuum in my life with creativity. And I eventually became an artist-cum-entrepreneur.” May be she enjoys an impartial view of art, which is why she is able to impart such delightfully novel concepts to the world of visual arts.

As NASA Astronaut Mae C Jemison once famously said, ” Arts provide a universal understanding of a personal experience.” ; the exhibition ‘Chhota Bat Badda Score’  weaves together strings from multiple stories, sourced from the deep personal experiences of its 275 participants. In doing so, it creates a wondrous fabric of human expressions, all of it achieved through a modest cricket bat. The exhibition is highly recommended, do take your children to see it, and let them reach out to the beauty of art. 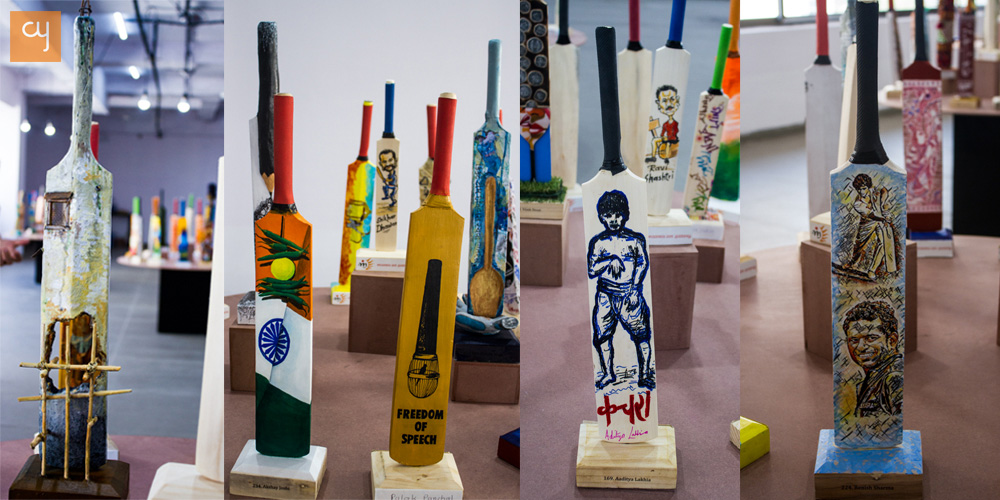