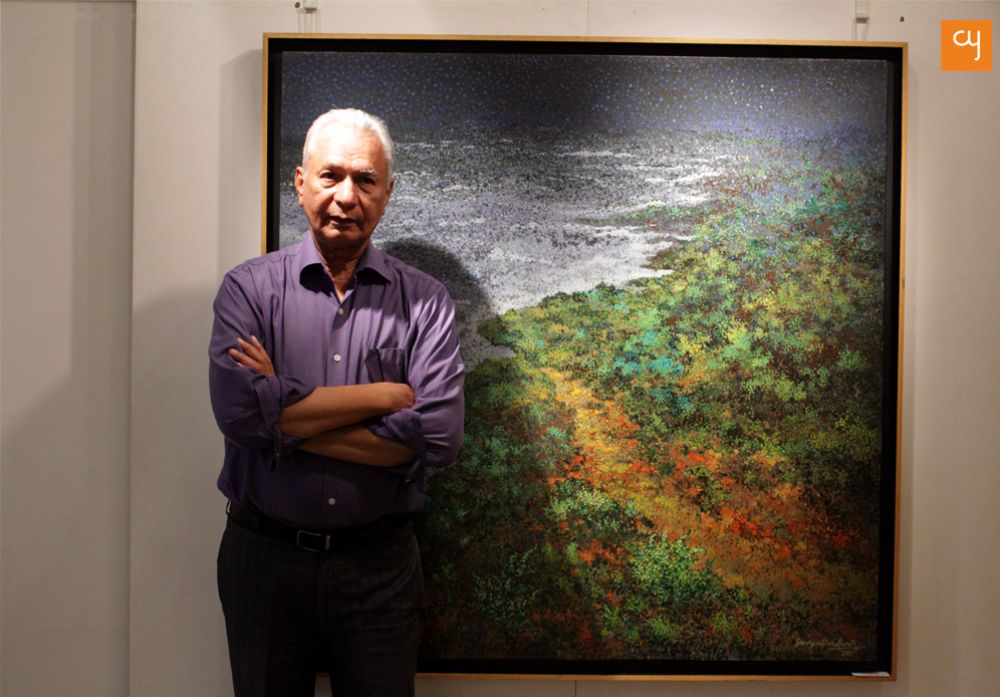 Mantra Art Gallery, opens up a new display, vibrant and colourful, of paintings by Surya Prakash. The paintings compliment the mood of monsoons, but more importantly the exhibition brings about a pleasant change from what we have seen in various shows in Ahmedabad. Curator Nayana Soparkar’s lucid insight has to be complimented.

The exhibition opened on September 8, and will be on display till September 30, every day between 3 pm to 7 pm (except Sundays)

Surya Prakash, based out of Hyderabad, has started his practice since 1960s. His initial interest was to express urban dystopia created by broken and abandoned automobiles, which resulted into visceral abstracts. In the later part of his artistic life, somewhere around early 90’s his interests shifted towards nature. Nature became a big lure for him, not just as a painter, but as an individual who wanted to experience the exquisiteness of nature, fully. Ever since he has only painted Nature.

“I practice my art, everyday” he says;  “the biggest challenge is to not give in to forces of competition, rather develop commitment to compete with one’s own self”, he adds as words of advice to young aspirants. This marks Surya Prakash’s third visit in city and he shared his concerns on expanding urban cities; leaving less spaces that inspire people, “The landscape-architecture of cities are changing. I fear, cities are losing its unique character with construction of multi-storey buildings and humans are forced to behave like machines.”

Surya Prakash has developed his own method of creating artworks. Whenever he is out there, experiencing Nature, he makes sure he is carrying a camera. He captures multitude of frames and scenes in his camera; and when he sits in front of the canvas those clicked images become his starting points. His method is not an exact representation of a particular still, it is more about merging the still image with his own experience of that moment and how he is feeling as an artist at the point in time while he is painting. There have been times when he picks up a decade old picture and starts off by combining that with his current experience. 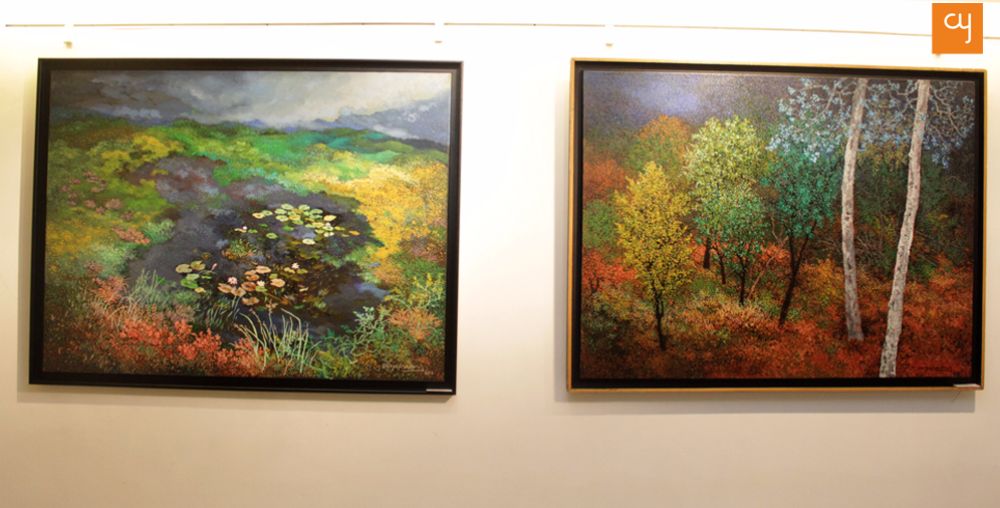 In his paintings, we see a distinct visual language, one that is a combination of documentation, experience and imagination. “I choose the treatment I want to give to my experience and it’s colour scheme, I’m a happy and positive person, and so I use a certain colour palette which conveys these emotions”, he shared.  And you cannot but believe him completely. The brightness and vibrancy in his works his infectious and one would want to have extended time viewing the nature-scapes. The canvasses on display are mostly large sized, giving the viewer a wonderful experience of neo-impressionism. The way the paintings combine colour and light with nature and space, it creates a subtle romance, that leaves the viewer captivated. 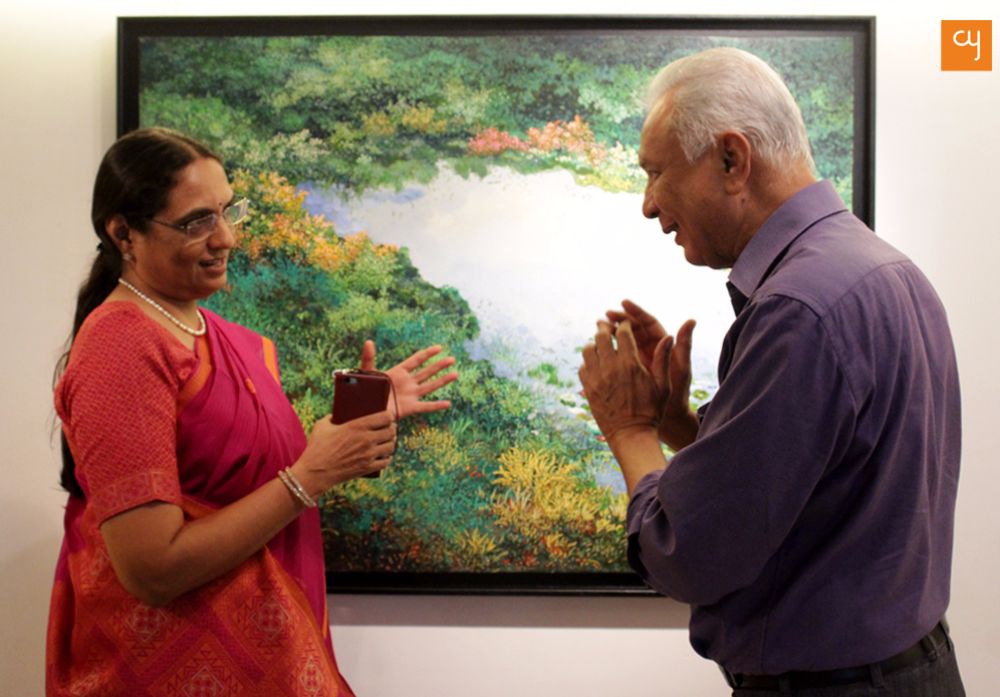 Soparkar, quite enthused, and rightly so, has given the city a rare chance to view the works that belong to the upper crust of the impressionistic tradition of fine art in India. “I really wanted city art lovers to witness landscape painted in an experiential manner, and see the pointillism technique which is now less used”, shared Soparkar. She explained that the technique which needs lot of patience, has been mastered by Surya sir and that is what motivated her to curate this exhibition. 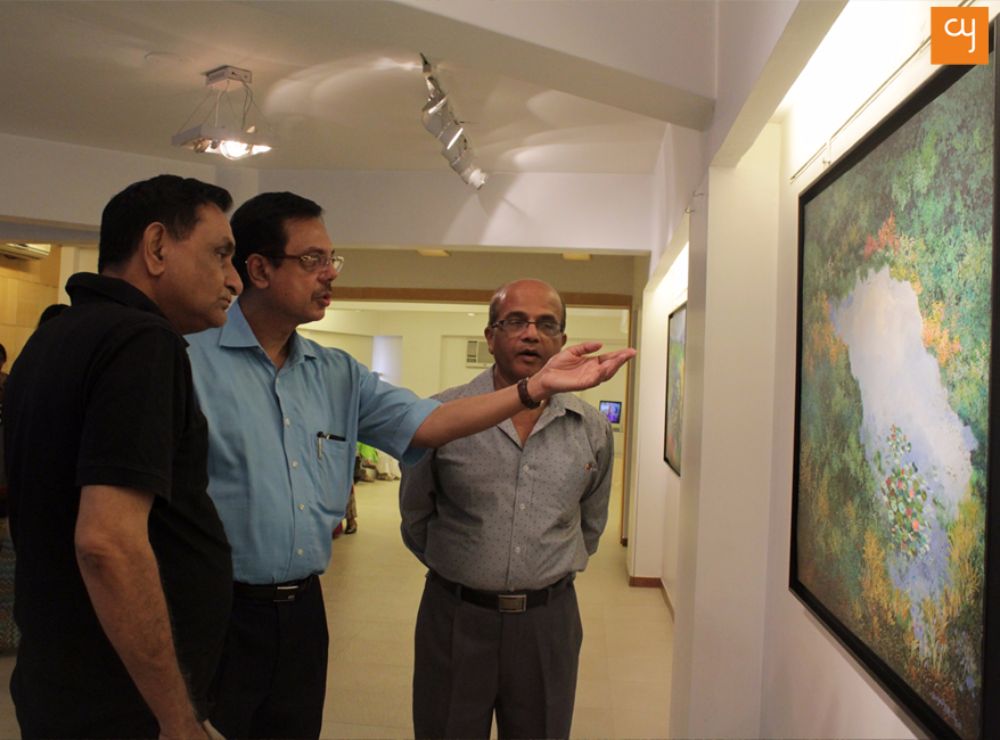 The exhibition is well received by appreciators and we could see them engaging with the art. As Surya Prakash mentions, for him, the interpretation is left to the viewer, his perspective is to bring his experience out on the canvas. The works create a subtle impression on the viewer and softly transports him/her into the nature space.

A visit is highly recommended, and if you are a collector, his works would be a worthy addition that represents Indian Impressionism in your collection. 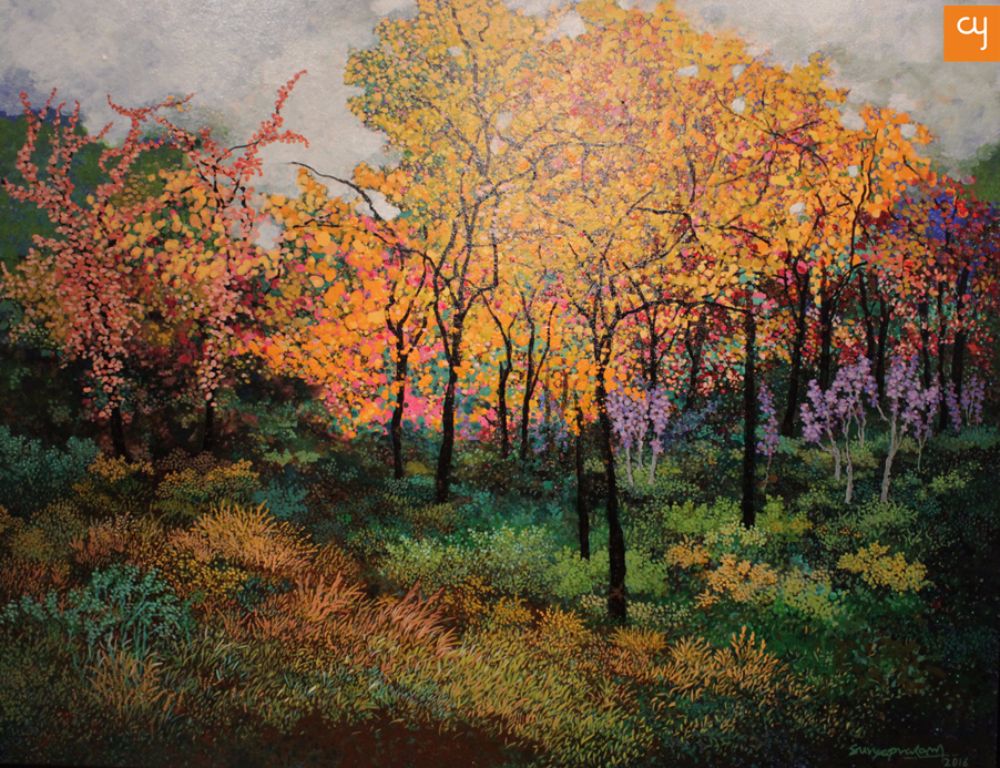