The best local dishes of Makar Sankranti from around India 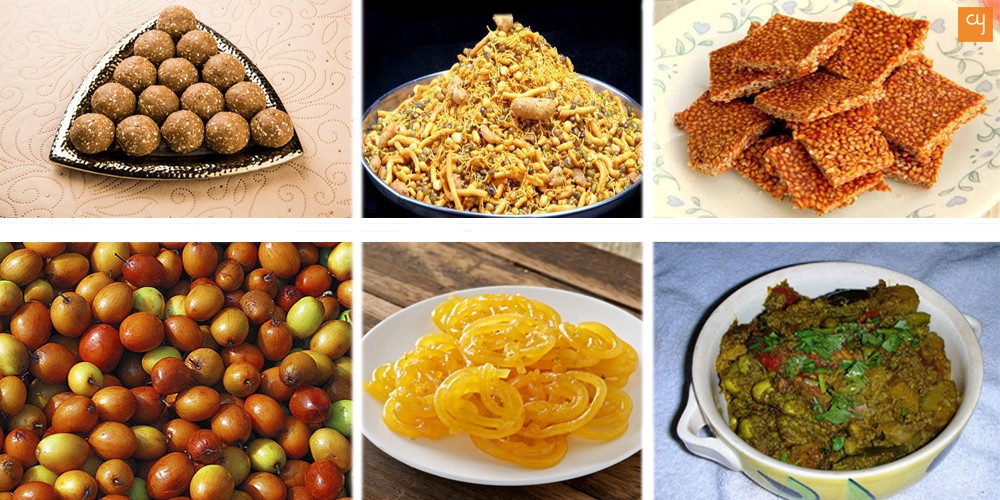 Dreaming of enjoying delicacies during the kite-flying festival? Did you know that different parts of India have their own unique regional specialities? Find out what the best of these are.

January 14th is celebrated across various parts of India as Makar Sankranti. While Western India calls the festival by that name, it is called Lohri in Punjab, Pongal in Tamil Nadu and Magh Bihu in Assam. And of course, Gujarat brighten up her skies with colourful kites on Uttarayan, which is said to be the best time of the year to visit the state. While every region has its own customary rituals and unique food specialties, the common thread between them all is how bountiful these spreads of delicacies are in every region. If sesame seeds dominate the Sankranti traditions in Northern India, pitha, puli and patishapta rule the Eastern states. The festival is incomplete without savouring some of these super-foods! Find out about some of the best local delicacies found around India at this time of the year.

Why sesame seeds are the most sacred ingredient of Makar Sankranti

In Hindu mythology, Til (sesame seeds) is believed to have emerged from the sweat of Lord Vishnu and fallen onto Earth. Its usage is therefore believed to wash away sins. Moreover, God Yama is said to have blessed sesame seeds, and so they are honoured as a symbol of immortality. Items made from sesame seeds are therefore considered a must-have during Makar Sankranti. They’re made across all the states of India where this festival is celebrated. Hindu scriptures recommend six ways of using til (sesame seeds) on this day – to offer them or to give them as charity, are some of them.

In Gujarat, chikki, laddoo and rewdi are made from sesame seeds, while in Maharashtra, they make tilgulvadis (sesame and jaggery fudge) and tilachipoli (thin slice of bread stuffed with jaggery, sesame and poppy seeds roasted and ground). In Andhra Pradesh, ariselu (sesame-crusted rice pancakes) and pakundalu (rice flour mixed with jaggery and coconut) are the favourites during the harvest festival. And Ellu-bella (sesame and jaggery sweet) is a signature Makar Sankranti sweet made in every household in Karnataka that is made along with dried coconut, roasted peanuts and fried chana dal (split black gram).

Uttarayan is synonymous with undhiyu and kite-flying in Gujarat. A plate of undhiyu consists of so many ingredients that it can undoubtedly be called the Queen of Gujarati cuisine. Undhiyu is a regional specialty of the Surat region. It gets its name from the Gujarati word ‘undhu’ which means ‘upside down’. This is because this nutritious mixed vegetable dish is traditionally cooked while placed upside down. The story goes that, in the olden days, farmers would cook this dish in an earthen pot by burying it in the ground and lighting a fire from above.

The dish comprises of muthiya (dumplings made with fenugreek leaves and chickpea flour), seasonal vegetables, roots and different types of beans. The dish is slowly cooked minus water so that the vegetables are not overcooked and retain their crunchy texture. The dish is garnished with cilantro leaves and lime juice before serving. Undhiyu is so popular that it sells like hotcakes across all food outlets in Ahmedabad.

Undhiyu with jalebi is the most perfect combination. However, it is also had with puri. The best three places to get undhiyu in Ahmedabad are:

2. The Grand Thakkar at Satellite

Besides undhiyu and jalebi, other food items that are relished during Uttarayan are: tilchikki (a sweet made from sesame seeds and jaggery), chavanu (Gujarati snack), Khichdo (dish made from whole wheat, spices, lentils and dry fruits) and fruits like guava, sugarcane and bor(Indian jujube). Those who have never experienced the magic of Uttarayan should visit Ahmedabad at least once. The crowded terraces and tantalising energy that fills the air, with thousands of colourful kites covering the sky, will be one of the most enthralling experiences of your life.

Pitha, the traditional pancake of Assam

Makar Sankranti is known as Bhogali Bihu or Magh Bihu in Assam. The customary Bihu breakfast is called jolpan and comprises many dishes, including the famous pitha, a thin pancake typically made from bora rice that is stuffed with a mixture of crushed black sesame seeds and jaggery rolled into a cylindrical shape. ‘Pitha’ is the most popular traditional Assamese sweet snack. Different types of pithas rule Assamese kitchens during Makar Sankranti. Some varieties of pitha are sunga pitha (soaked bora rice stuffed into bamboo shoots and roasted on fire), ghila pitha (made with rice batter and wheat flour mixed with jaggery) or the exceptional khola sapori pitha (delicious pancakes made with chopped onions, rice flour and night jasmine flowers).

The traditional pithe and payesh for the sweet-toothed in Bengal

In Bengal, Makar Sankranti is celebrated as the harvest festival ‘Poush Parbon’. Pithe and payesh are the cherished Sankranti dishes. Making pithe is not only a rural tradition but it also marks how prosperous a family is. Rice, moong dal, sweet potatoes, plenty of coconut and date palm jaggery are used in making a variety of pithe. Other common favourites like patishapta, puli and gokul pithe, which nowadays are rarely cooked in urban kitchens, are found in the sweet shops of Kolkata during Makar Sankranti.

Have Pongal during Thai Pongal in Tamil Nadu

Thai Pongal is the second and most important day of the four-day Pongal celebrations in Tamil Nadu. It is celebrated by offering Pongal (made from newly harvested rice cooked in milk with jaggery). In most Tamilian households, it is a custom to make two different kinds of Pongal–shakkarai Pongal and ven Pongal – with newly harvested rice and moong dal. Besides these, people prepare sweets like vada, murukku and payasam, and exchange sesame and peanut laddoos on Makar Sankranti.

Wherever you are in the country, catch a taste of Makar Sankranti with these veritable local delicacies!