How food delivery apps have transformed the market

It’s hard to imagine a life without Swiggy or Zomato. How did apps like these emerge and how do they affect food suppliers? And are some of the services disadvantaging the market’s players?

These days, when hungry at home, we don’t always have to think about what to cook. We can simply order in with a mobile app and enjoy the meal in the comfort of our own home. Not long ago, the act of eating out was like a social gathering. While it still holds that meaning for some people today, eating out has also become a necessity for a few and that necessity can now be delivered at their doorstep. This could be anything from a humble cup of tea to a sweet craving for a cupcake to a lavish party order!

So how has the phenomenon of ordering-in transformed consumers’ lives? Who are the major players? And how does it affect the food suppliers? Let’s first look at the phenomenon from the perspective of the consumer.

How did food delivery apps emerge?

The consumer is king in the hospitality sector. Even if they are wrong, it is their satisfaction that converts into currency for the food-churning kitchens of restaurants. Nowadays, consumers are often short for time, so they prefer to partake of the experience of eating-out by having the food delivered at their choice of destination instead. Given this, restaurants had to make themselves available for home delivery option, a model that is not easy to manage alongside busy restaurant operations. Thus was created an opportunity for a third party to pick up the packed order and deliver it. Soon, this entity also started to offer a variety of restaurant choices, advertise their menus and give benefits to regular customers. Companies operating as delivery services today are Swiggy, Zomato, Uber Eats and Foodpanda.

Initially, all these portals started in metro cities but now they are slowly venturing out to Tier-2 and Tier-3 cities. These apps are increasingly becoming a necessity in consumers’ lives. Perhaps this picture circulating on WhatsApp of a child’s school assignment sums up the cultural effect of this phenomenon! 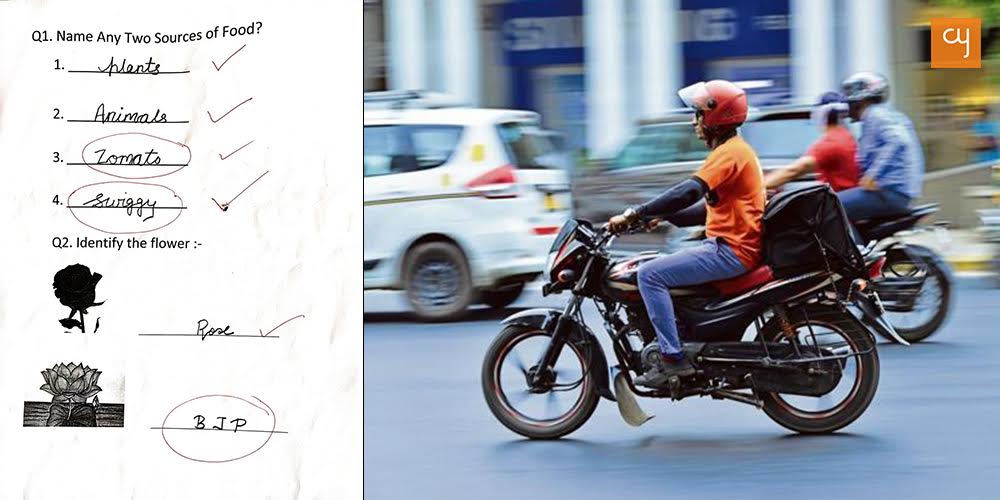 Most of these apps initially started small but grew over the years to provide more features and services. Initially, they did not have the option of tracking deliveries with live status updates. Now, this feature is common. Also, initially, payment through wallets wasn’t a possibility but now it is. Apps also offer memberships now, which help ensure customer loyalty.

How have food suppliers’ work been transformed by delivery apps?

These apps have opened up many avenues for entrepreneurs who would like to do business with fewer overheads. When a restaurant decides to do their own delivery or takeaway style model, approximately30-35% of the cost goes towards maintenance of vehicles, salary of delivery personnel, and packaging. Delivery through apps, therefore, saves the restaurateur the administrative costs they would otherwise have to bear.

The apps charge anywhere between 18-26% commission from food establishments based on the quantum of orders they get. Home-based cooks who would like to do small businesses also of register on these portals so they can earn through minimal orders and test the waters before they create full-time food establishments. In fact, Swiggy also promotes vendors who are hyper-local. They include in their listings small vendors who run round-the-corner shops that sometimes sell only single items like dal wada or vada pav.

Are some of the services offered by these apps disadvantaging the market’s players?

While big names in the food industry—McDonald’s, Subway, Faaso’s and Pizza Hut—have even started customising special menus and counters for Swiggy and Zomato pickups these days, there are some restaurateurs who are not in favour of these apps. Some entrepreneurs and restaurateurs are not happy with the heavy discounts these companies are shelling out. Swiggy has a policy of giving discounted deals to customers from its own pockets, while Zomato takes a part of the discount from the vendor. These restaurateurs feel this hampers their restaurants’ in-house counts. Also, these apps provide preferable service to establishments that give them volume business. Recently, the apps have also opened their own cloud kitchens with different cuisines that some outlets churn out for them, and hence they promote their in-house brands more than the restaurants they list.

With the competition in the market being neck-to-neck, the Federation of Hotel&Restaurant Associations of India (FHRAI) has requested the government to look at the unreasonable discounts offered by these portals. The government is in discussion to put a cap on the kinds of discounts one can offer on these portals. The apps have stopped offering high discounts at the moment so, for now, the large variances in sales that happen in standalone restaurants have been taken care of.

Besides this, some restaurants continue to carry out home deliveries on their own because they want to provide the whole experience rather than depend on a third party. These restaurateurs also feel that if they can manage the system, then they have the entire product and service in their own domain. To state an example, Domino’s Pizza believes that they are better at delivering and following up on their own orders so they do not participate on any apps but run their own delivery network, along with an app which gives the consumer similar services to track and place orders.

Despite these issues, with change and technology’s reach being inevitable, the model created by these apps might soon be adopted by all. Entrepreneurs are increasingly looking at doing sales only trough apps and takeaway models, so that they only need to invest in production areas, packaging and marketing. Special joints that only do takeaway/delivery are also finding a footing in the market.

Only time will tell what lies in store for this model. Given how it has a more customer-oriented approach, better feedback systems and creates equal opportunities for all—from five-star food establishments to roadside corner shops—the future broadly looks optimistic for all involved.