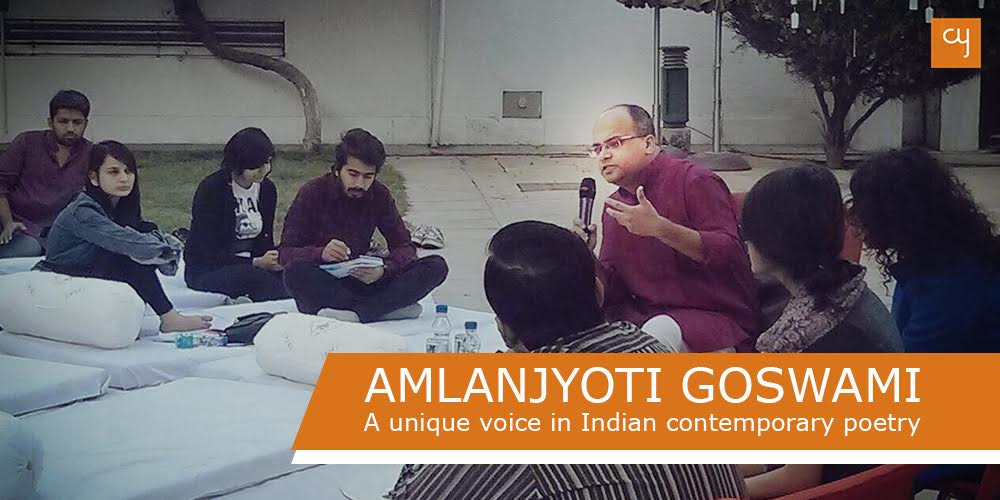 Amlanjyoti Goswami’s debut poetry collection ‘River Wedding’ is an honest exploration of the world around us—of loss but also hope, of evil but also the search for good.

AMLANJYOTI GOSWAMI is a rare voice in the vast world of poetry, let me begin by saying that. River Wedding, his debut collection, is a book of poems that urges the reader to spend careful time with it. For one, you cannot race through it, nor can you feel the pulse immediately until you’ve cut off all the distractions around you. It is then that the very first poem titled “Bard” begins to speak to you and invites you to listen to a rhythm which is so fresh, which is so absolutely its own—

Her hand and feet, invisible
Stretch free, like old tree,
To seats empty of feeling.

Amlanjyoti Goswami grew up in Guwahati, Assam and currently lives in Delhi. His poems have been published in many internationally recognised journals and anthologies but most interestingly, his works have appeared on street walls in Christchurch, exhibitions in Johannesburg, and buses in Philadelphia.

Published earlier this year, River Wedding is a beautiful collection of 74 poems (counting the End Note) that takes us through the pots and pans bustling in the kitchens, the birds hushing among “the limbs of painted trees”, the shadows of college lovers moving with the sun, a strange man disappearing into the buses, an old teacher pockmarked with time, an actor turning into a butterfly in the night’s silence—a miscellany of all that is transient.

Amlanjyoti’s poems often deal with the slow disappearance of people and things, or sometimes of loss caught in transit. Fears, therefore, come alive in many of his poems. For instance, in the titular poem “River Wedding”, we’re exposed to his mother’s fear of water after dark, a fear that developed after Oruni, “the village Huck Finn”, spread a rumour when the mother was five. Oruni would tell her about a river’s wedding, about the participating guests, Brahmaputra’s many sisters, who would enter and flow through their village: “It would rain and thunder/so much fun.” Mother, he writes, hasn’t stopped wondering if all that water was bottled somewhere in the stations across the street, that it waits its turn now to burst open one night—homes only a moment away from being washed away, loss being a consequence of life. 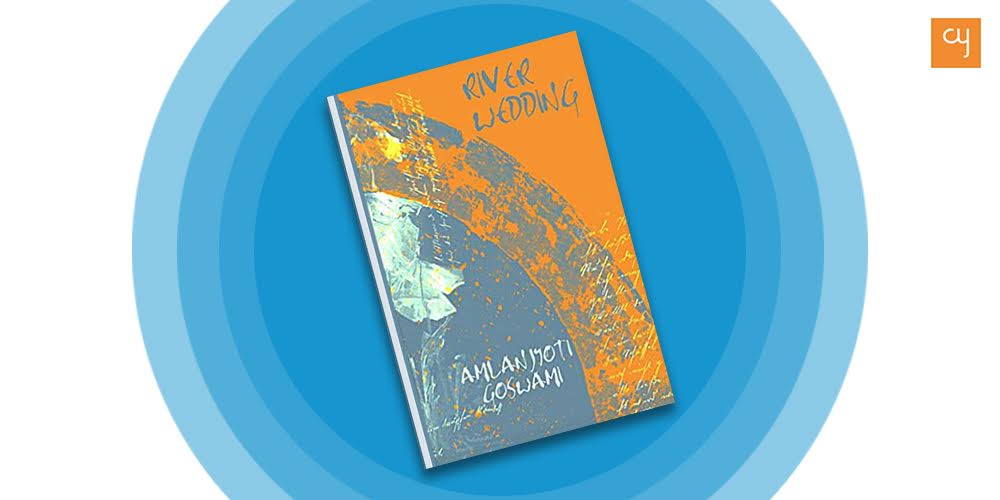 In the poem “Preparation for the Journey”, he writes not so much of the moment of passing away of his great grandfather, but of the moments approaching death, as one prepares for it, including those of confronting its nearness. This is a journey as much for the children as for the father, odyssey-like perhaps—“Ulysses, ready to take off one more time”—travelled with an uncertainty of return but when narrated to the great-grandchildren, the journey is fairy tale-like: “It was a bright morning/ He was smiling.”

As difficult as absences are, so are reappearances, sudden sometimes and difficult to ignore. In “Crumbs”, the poet fights old ghosts that appear and stand in front of him—ghosts perhaps of his own past, or of the ones he’s lost. How does one deal with them then? Perhaps the answer lies in deceit, he tells us; in a negotiation that you could act as a trickster, as one who’d leave only his shadow behind:

Old ghosts wave at you
They want more, more
You face them
So they would run
But they still stand, hands on hips,
Waiting to spring a surprise.

Turn your back at them
They are at your heels.
Quietly leave your shadow
For them to devour.
Winter down the middle lane

Like an old trickster
Who leaves the cops with crumbs,
Far behind, happy with
The sorry shadows
In their palms.

The Face of Evil and of Goodness

In two poems placed one after the other, “The Face of Evil” and “Of Goodness”, the poet shows us how both could manifest in the everyday:

Evil does not need to shout, Didhiti,
Once it is inside, like dust,
Our homes and lives, the television set, the smartphone.

Evil is then,
The morning shower,
It is breakfast
It is thought.

Here, in “The Face of Evil”, he believes that deferring time for evil’s arrival might still be possible, yet he immediately wonders: “But what about now?/ What about the faith we have lost in people?/ What about the doors we keep locked today?” In the second poem, the question— while carrying forward a similar sentiment—also carries a yearning:

When will goodness bare its soul?
…
If goodness had an arm and leg, and hands and eyes,
And wore its heart on its sleeve,
We might hear more of it.

Many questions become difficult to answer but, as Amlanjyoti shows us, many answers carry equally difficult questions too. In “God Grieving”, he writes: “When Karna fell/ A passing soldier asked: Why?/ Why didn’t the better archer win?/ And by far, the better man…” That would change nature’s wheels, he says:

Imagine Krishna, driving the chariot, with no Arjun
Into the crowd of battle,
We would all make way,
But a god grieving?

How could humankind survive
a god grieving?

At this point, it would be right to quote Pradip Acharya, from the brief introduction to the book, where he writes, “[Goswami] can make large gestures and statements at will and he has that flair.” I’d add that he also has the flair of returning to smaller but meaningful gestures, as in “Injured Bark”:

Nothing is perfect, will never be.

Just like sky, blue one day, red the next.
Or the sea – mellow – and yet the ache of distance.
Keep going, one day, they will find in your tender bark,
A home for the birds.

Similarly, in a brilliant poem “Lines Curved and Straight”, Goswami tells the reader not to be deceived by straight lines that pretend to be bearers of the truth. He draws upon examples to convey the distances that we sometimes have to travel to get somewhere—for two lovers to meet, a mother to reach her son, a bird that may finally become free. It takes more than a straight line, it sometimes takes both the act of meeting as well as of departing. A straight line is only “boredom made/ Mathematic,” he writes. “Yet, we persist, in fooling ourselves, in maps/ in the troubled spots of the heart, in prayer/ And music, as if the best way to get anywhere/ Was instant.”

Amlanjyoti Goswami’s book is to be treasured for this reason—not only does it remind us of larger questions in the most gentle ways but also gives us clues about what the world leaves for us to pick up,so we can see a part of ourselves in it:

“Home is the place we carry
Inside.

The well of a basement
Where a kindly landlady
Plays old Sinatra tunes
And asks if it is all right, with deep blue eyes.
And then, drives off alone
into the night
Looking for something.”

Housed within a gorgeous cover designed by poet and artist Nitoo Das, and published under India’s leading poetry publishing house Poetrywala, River Wedding deliberately immerses us in the world around us. It is modestly stylish in its expression, and delicate and rich in its images which are both still and moving, which both stretch and stall time.

“Calm, lunch done, the sun moves slowly
Down the late afternoon sky.
We too remove ourselves silent,
Like those plates, to the quiet of our rooms,
And wait,
For evening to stir us awake,
Night to call us again,
Morning to somehow, crawl back in,
To life, more life.

The kind that, like a child,
takes a morsel, when nobody’s looking.”