"The Initial" Shows a Promise for the Final Future! 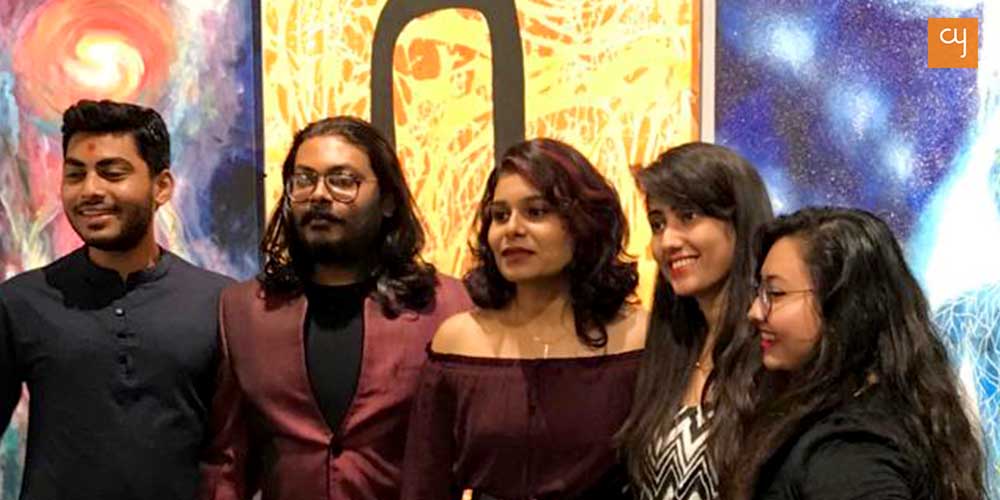 After the coming together of veterans of the C N Sheth College of Fine Arts’ 1981 batch last week, it was the turn of three young pass-outs of 2019 of the same College to collaborate and host a show of their works this week. The show titled “The Initial”, implying perhaps a start for these young artists, was commenced at The Gallery at The Amdavad ni Gufa campus on Tuesday.

What was unique about the inaugural ceremony which also saw a fair amount of pleasing floral decoration inside the Gallery was that the show was commenced by the three sets of parents, the Mewadas and Sonis whose three children Maitry Mewada, Nirali Soni and Srujal Soni are showing their latest works! 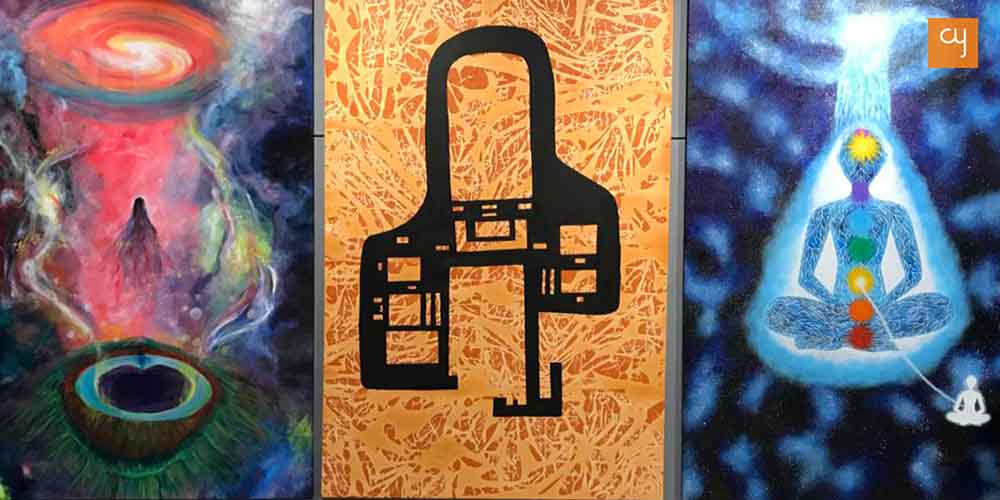 Comprising of more than 60 art works, the show features a major share of works by Maitry and 14 works each by Nirali Soni and Srujal Soni.

Done mostly in Acrylics, some in mixed media, and a good number in ink most of the works by Maitry fall in two series named The World and The Nature. As the name suggests the first set of works both in black ink and shining acrylic colours dwell on the complexities and struggles the present world is full of. The colored works in this series according to the artist also represent somehow the small hope, the little bright side and scant peace in human life on the planet that the mankind manages to stitch together as it meanders its way through the complex world. 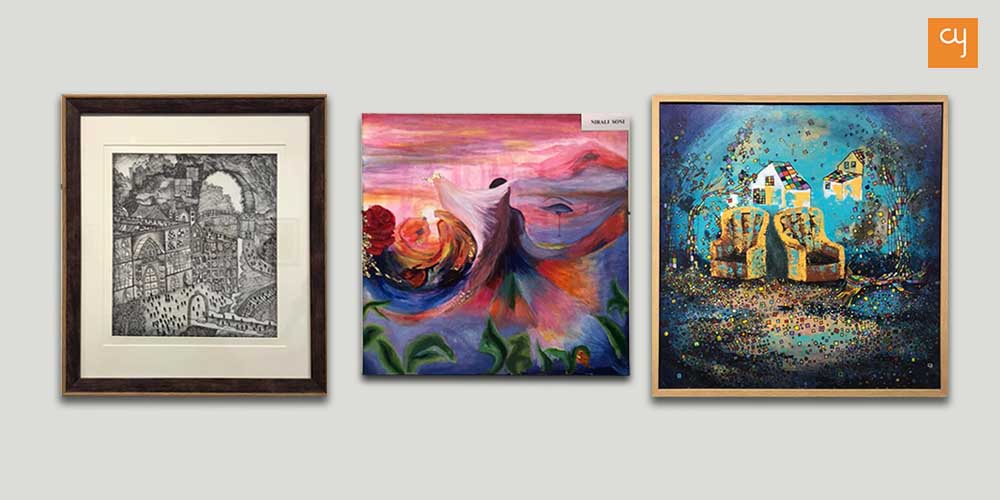 Maitry’s series on nature presents a fascinating study of flora, fauna and landscapes in miniatures of 4” by 4”. All in pleasing colours that enliven the nature in these mini works, these are truly a treat to watch !! Maitry has also put up a giant work on the theme of meditation.

Nirali has brought some abstraction or half abstraction on the canvas. She chooses to portray the eternal and ethereal love between Radha and Krishna in her fourteen delicate works that are beautifully colored in soft hues of predominantly pink. Titled very aptly in Hindi adjectives to convey the theme of ubiquitous love between these two legends of Indian history or folklore, which would depend upon how one approaches and perceives these great stories of Raaslila. 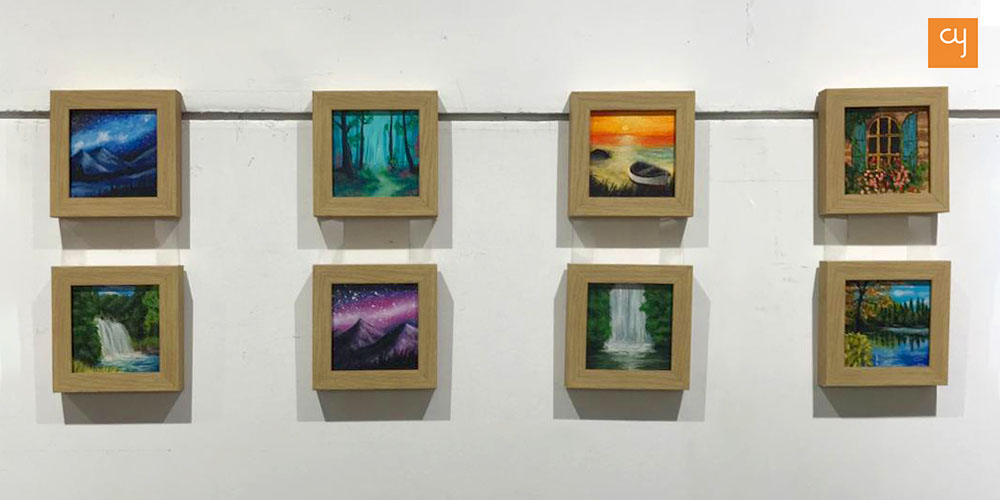 Srujal has dwelt on the art of Ajanta caves in his fourteen works that look quite similar being in one class and category having been inspired by the artist’s visit to famous Ajanta caves.

These two layered works in brown, black and silver colours merge together the shape of a specified cave as perceived by the artist from an aerial angle from a distance, which is then juxtaposed with the artwork drawn inside the cave done here on the canvas in an outline form in silver. Srujal and Nirali have also created a giant work each like Maitry and the three works have been placed at the end of the Gallery to form a kind of triptych. 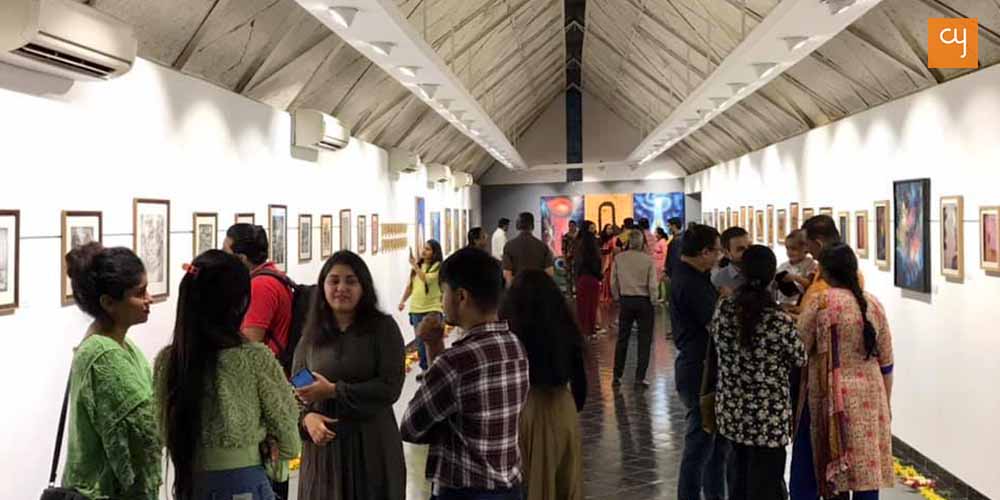 The show by these upcoming artists is a fair deal in every way and a must watch to pat the back of the creative trio, while the art scenario tends to be back with its usual speed and spirit. It’s on till Sunday, August 08.