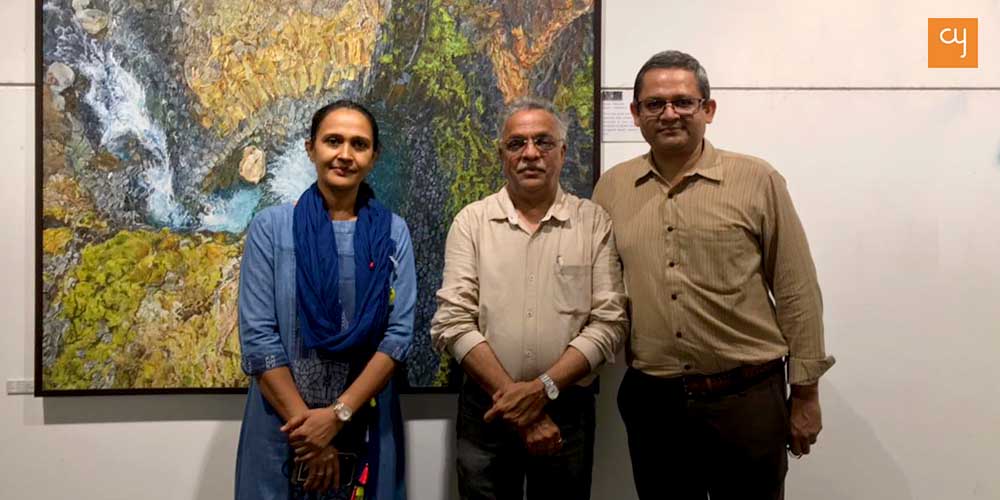 ‘The Road Less Travelled’ is the newest show in town. A show of travel pictures-based landscapes by Jalpa Ujjaval, this one was opened yesterday at the ever booked The Gallery at Amdavad ni Gufa.

The show lives up to its name in the sense that spots chosen by the artist Jalpa to portray through her paintings are neither frequented much by international travelers nor are much offered in popular itineraries for or in conjunction with Europe, USA or Canada. But the spots are unparalleled in their unique and majestic natural beauty, located as they are in the faraway and one of the coldest regions of the world, namely Iceland! 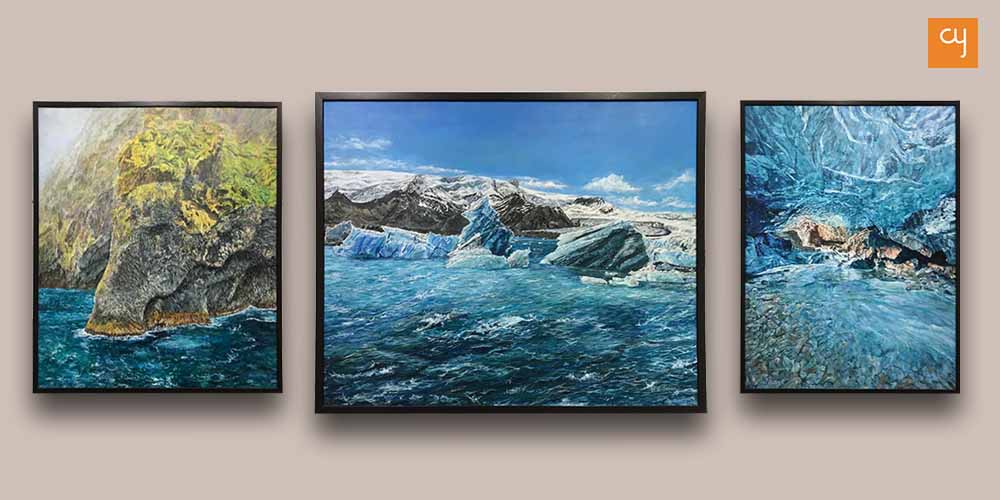 It all happened by destined coincidence as Jalpa was in the process of reclaiming her prowess with painting having forsaken it for well over a decade for taking care of her two sons, something most mothers will instinctively do. Then when she thought she was ready for a comeback she ‘naturally’ and instinctively started with nature as her mainstay but for only a few works for a group show last year.

It was here that her better half Ujjaval stepped in with his pictures from his tours of the enchanting Iceland, Norway, Switzerland and New Zealand to ideate, catalyse and enrich her depiction of nature on canvas. The stage was then set for her solo show the gallery space for which had been booked by Jalpa a long time ago, going by the fact that Gufa Gallery remains perpetually sold out. 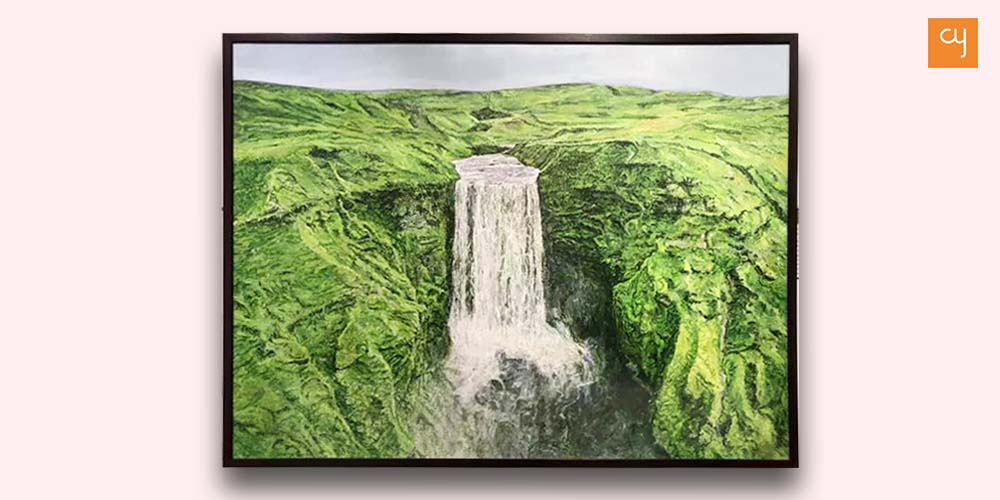 So the show by Jalpa – who has been encouraged and mentored by artist, art teacher and now Principal of CNCFA, Manhar Kapadia in her come-back forays – offers twenty three works in three sizes, most of them in acrylics while a work or two is rendered in water colours too. Barring one work based on a picturesque location in Norway, two on Swiss Alps and one again on Lake Brunner in New Zealand, all others are inspired by mountains, glaciers or waterfalls in Iceland.

While the works refer to the spots in essence with their names and complete geographical description beautifully excerpted from internet by Jalpa’s teenaged son Het, their representation on canvas comes with the imaginative flight of the artist, who says she enjoyed playing with the surroundings of the locations in her own way! 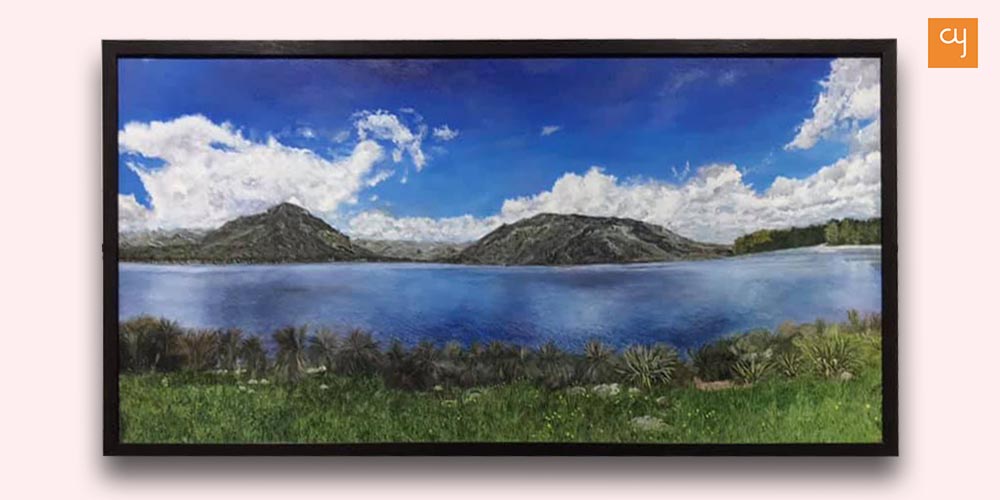 The titles like ‘Brute Divinity’ for the waterfall Skogafoss, ‘Divine Revelation’ for scree mountain Vestrahorn; ‘Opia’ for Lake Brunner; ‘Colossal’ for Gufuffos waterfall; ‘The Magnate’ for Church Mountain or Kirkjufell and so on, are enchantingly imaginative and fascinating! The last work interestingly throws up some similarities with Mount Kailash and Mansarovar to a mind that has seen pictures of that unique and tedious pilgrimage and its final destination.

The colours used by Jalpa do show a certain appeal and aesthetics associated with landscapes of these unspoiled natural spots on the planet earth; even as the risks of climate change are growing to loom large on all our glaciers, snow on the mountain peaks and sea levels almost irreversibly. 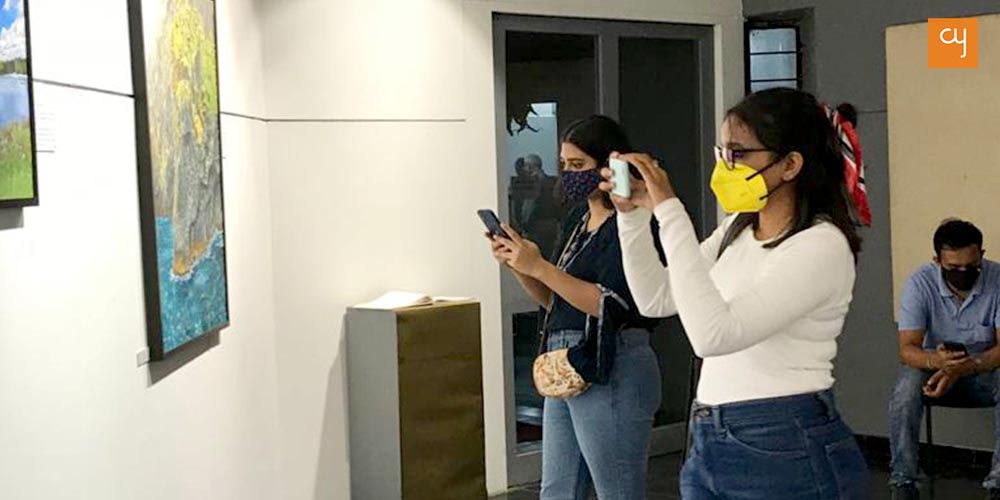 Entirely a show on landscapes with only hints of abstraction unique to Jalpa, most of the body of works is so well defined and decipherable that this one – to use a word from the show intro – ‘teleports’ you to the fabulous actual locations. The narration along side also introduces you to the facts associated with the place. For their size and aesthetic appeal, the works on show are reasonably priced for one to acquire a piece!

Worth a visit subject to observance of general pandemic protocols and visitors’ own condition, this show is on till August 15, the Day India would usher in its Amrit Utsav year!