Saptak Archives: Immerse in the eternity of Indian Classical Music 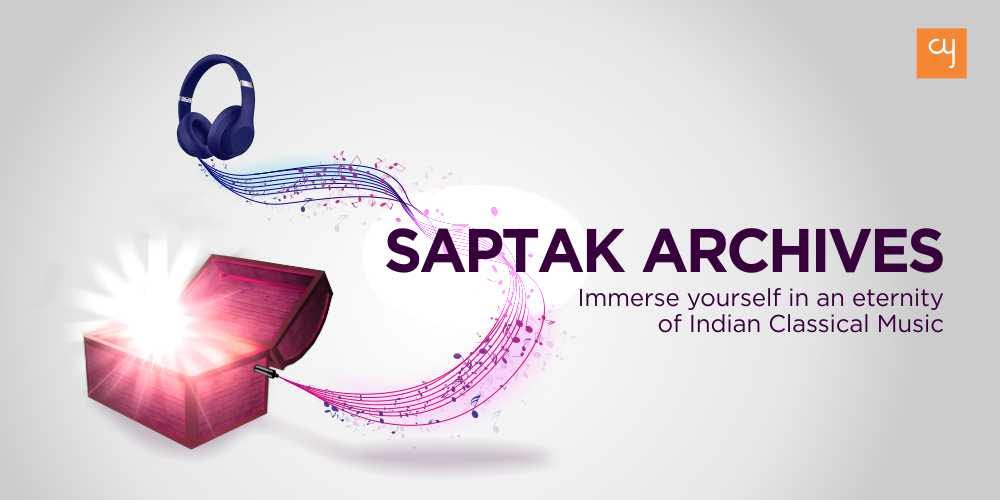 In the city of Ahmedabad lies a time capsule of Indian classical music. Saptak Archives has a collection of recordings of the greatest artists over the generations, gathered from concerts and personal collections. Read about this treasure trove of music here.

Fading black marker on a cassette reads ‘MANILAL NAG’ and lying upside down on this cassette is another one reading,‘PANDIT RAVI SHANKAR SITAR’. The stacks of cassettes feature several legends, and I have to squint my eyes to see the names– Buddhaditya Mukherjee, Amjad Ali Khan and many more, along with the year of their performances — all featuring some cryptic code or system of documentation. I gasp at the several LPs in the corner, letting myself absorb the wealth of musical treasure housed within the four walls of Saptak Archives. It’s a strange juxtaposition of new and old — a modern desktop with wave-forms on editing software beside a 30-year-old cassette with scribbled handwriting. At Saptak Archives in Ahmedabad, musicologists and digital engineers have collected and preserved over 6,000 hours of recordings from across the realm of Indian classical music, featuring over 950 artists.

Saptak Archives is like a library of music. Priceless collection of music, mostly recorded at LIVE performances, includes some of the best specimen of Indian classical music. One can access the music from the legendary ‘Saptak’ Festival that has been happening in Ahmedabad since last 39 years. The recordings come from several places – apart from baithaks held at Saptak to private collections of music connoisseurs. Anytime between noon to 5:30 pm on weekdays, Saptak members can enter this nonchalant building, located in an unassuming suburb of Ahmedabad, and access thousands of performances across history within minutes. The technology is pretty simple. The recordings are converted into a digital format and kept in a server at the Saptak Archives headquarters, and the computers are connected to the server. No internet, no cloud! The risk of infringing on copyright laws would run high if this extensive archive was available on the web, they explained. (They, however, have now started putting several recent recordings on their YouTube channel.)

The actual room that you sit in to listen to the recordings is deceivingly simple. Upon entering, you see a large photograph of Pt. Kishan Maharaj, with his signature red circular tilak. The sheer amount of knowledge in the room is palpable, amplified by the multitudes of pencil-sketch portraits of artists on the walls. Everywhere you look, history stares back at you, and you are reminded of the times when baithaks would stretch into early mornings, when an audience would be seated in a patron’s living room — away from the pressures of the auditorium, or even when a king would invite two artists to his darbar (court) and they would compete for the title of court musician. All these images run through your head until you sit down at the desktop, log on, and clickety-clack of the keyboard brings you back to reality as you search for your favorite artist singing their signature raaga.

The annual membership of Saptak is Rs 4,000, which includes access to the archives and passes to Saptak festival. The period of membership, in fact, has just begun, and lasts one year. Apart from access to archival music, member also gets invitations to the baithaks that are organised at regular intervals at the adjoining performance space. You can find out more about membership on the Saptak website which also features news and information about other events as well!

You may recognize the name “Saptak” by the eponymous festival that takes place every January in Ahmedabad, featuring the biggest names in Indian Classical music. In its 40th iteration, the annual festival, as always, begins on January 1 and continues till January 13, with 15 different music sessions for patrons to enjoy. The festival, now run by Manjuben Mehta ji, an eminent sitarist, was started by her husband, Pt. Nandan Mehta. A tabla maestro, Mehta is a stalwart in classical music community and people truly respect his legacy to this day. He founded the Saptak School of Music, and over years nurtured interest of generations into the aesthetics of classical music.

Every music lover should definitely take some time to visit this precious collection to delve into the ocean of Indian classical music, that is a throbbing piece of India’s cultural heritage.