Know these artists performing at Saptak 2019 in Ahmedabad 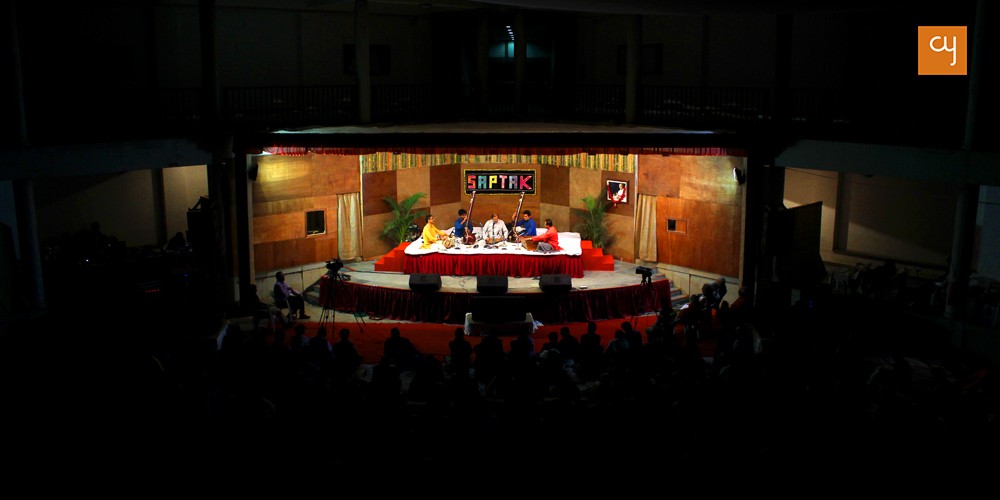 Know more about the artists that are performing at this year’s Saptak Festival.

Proficiency in Indian Classical Music is as much about devotion to the supreme energy as much it is about perseverance and skill. Saptak Music Festival in Ahmedabad, is one of the greatest confluence of artists from Indian Classical Music genre, who share stage for a fortnight to give ‘rasikas’ their annual dose of the subliminal musical experience. Each year legends and doyens of the century old art form descend on the stage of Saptak to perform; every night the audience is also introduced to a host of rising talent. Each of this artist has a story and a journey that led them to be the musician they are today. Get the essence of their sadhana and their sangeet here.

Shri Vidyadhar Vyas: This vocalist and educator was trained by his father, Pt. Narayanrao Vyas, who was well-known for his bhajan compositions for Mahatma Gandhi. Shri Vidyadhar Vyas himself composes and sings pure khayal as well as traditional bhajans, as he hails from the music family of the great bhajan singer, Pt. Paluskar. His reputation as an educator was solidified at many reputable institutions, including the ITC Sangeet Research Academy, University of Mumbai, and the Bhatkande Music Institute University.

Shri Nityanand Haldipur: The bansuri (bamboo flute) player is known for his pure, meditative playing and knowledge about the traditions of music, due to his guru, the late Annapurna Devi. Along with being a performer, he also speaks about music on programs on All India Radio, bringing in topics of music history, appreciation, and therapy.

Smt. Shubha Mudgal: claims many titles. As a vocalist, her style is versatile and has studied under many reputable gurus, Pt. Ramashreya Jha “Ramrang”, Smt. Naina Devi and Pt. Kumar Gandharva. Her voice traversed genres- having recorded Bollywood songs in the 90s, as well as singing pure classical for several recordings. Collaborating with all kinds of musicians and poets, she frequently composes and performs unique fusion projects. Her passion for music education led her to advocate for a push in public arts education in schools, for which she also began several online projects.

Jayateerth Mevundi: He is one of today’s young vocalists of the Kirana Gharana, the Gharana of Pt. Bhimsen Joshi. Routinely called a ‘powerhouse’ performer, his strength is singing taans, fast combinations of notes sung in long or short strings. Mevundi, who hails from the Southern region of Hubli, shares often that his influences come from not only his own Gharana, but many others, as well. His lineage, being taught by a disciple of Bhimsen Joshi, is that of devotional songs, though he does many awards and honors in the field of classical music and has performed at great festivals of traditional classical music such as Pune’s Sawai Gandharva festival.

Vidushi Manju Mehta: A doyenne of music and student of late Pt. Ravi Shankar, this sitar maestro and teacher has spent her life spreading knowledge. Music has been a running thread in her family; her elder brother was her first guru and her younger brothers, Pt. Vishwamohan Bhatt and Pt. Krishnamohan Bhatt are also performing artists. Her late husband, Pt. Nandan Mehta and herself are responsible for the 4 decade long Saptak Festival. From its beginnings as a smaller concert to its formidable setup today, all of the world’s best artists look to this festival and organizing it is no small task. She is also one of the most sought out performers, a top grade artist in All India Radio, founder and trustee of Ahmedabad’s Saptak School of Music and most recently received the National Tansen Award for her contribution to music.

Begum Parveen Sultana: This Assamese vocalist is famous for her powerful and emotion-laden voice that can span many octaves. She has been singing since age 5 when she began her training under her father. From there, she learned from a guru, Ustad Dilshad Khan, well known in the Patiala gharana, whom she eventually married and they perform many jugalbandis (duets). She has been conferred several honors, including the Padma Bhushan, and has a plethora of recordings, spanning a great deal of ragas. Her speciality is her range of voice and the range of ragas she has explored.

Pt. Hariprasad Chaurasia: This musician has been a well-known stalwart of the bamboo flute for many decades. Not only has he produced countless recordings of classical compositions, but he has also lent his playing to many film songs, whether it be English, Bollywood or Regional films. Aside from being a performer, his Vrindavan Gurukul in Mumbai and several other cities is a well-respected school that many students aspire to attend. His creativity has led to many compositions, and he even creates jod-ragas (fusing two ragas together two create another). He has received the highest government honor, the Padma Vibhushan, for his contribution to music.

Finding it difficult to wade through the classical music jargons? We have them decoded them for you here: part 1 & part 2