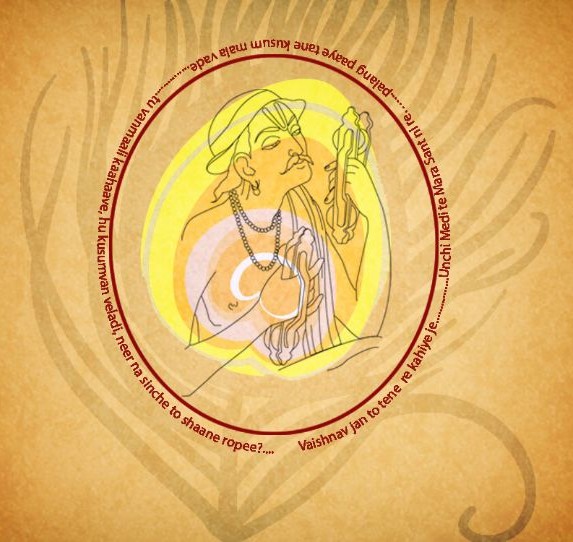 Narsinh Mehta an ardent devotee of Lord Krishna continues to reside in our hearts even today, after 600 years. Such is the presence of souls like Narsinh Mehta. Being a pioneer of Gujarati bhakti (devotional) literature, Narsinh Mehta started his journey into writing only to express his heartfelt gratitude and shower his love on Lord Krishna. Married at a young age of 15 and leading a life of being immersed into Lord completely, Narsinh Mehta was not welcomed at his sister in law’s home since he did not contribute to the income in the home. Rebuked by her insults he left home in search of peace and meditated at a Shiva Lingam in a nearby forest. Being blessed by Lord Shiva, on being asked his desire, Narsinh Mehta requested him to show his Lord Krishna and the gopis in Vrindavan. This divine spectacle transformed him and thus began his journey as a poet.

He embarked on his journey of writing 22,000 verses in the glory of his Lord and bowed down to his sister thanking her for her insults which led him to the forest. His compositions grew in number and his name spread as a devout bhakt of the Lord. Meanwhile his children, Kunwarbai and Shamladas also grew up becoming of marriageable age. Despite his poverty-stricken life, Narsinh Mehta witnessed many miracles in his life owing to his love, faith and Maitri bhavana with his Lord. A fakir at heart, when Narsinh Mehta was expected to give customary gifts for his daughter’s baby shower, he composed a beautiful Pada (verse) called Mameru Na Pada. Lord Krishna always provided for this gentle soul, helping his family, providing marriage gifts, Mameru gifts for his daughter and son, ghee for his father’s Pind daan taking care of his devotee’s livelihood.

Narsinh Mehta spread his Lord’s love far and wide overcoming every obstacle including casteism that came his way by conducting bhajan and Kirtan at Harijans homes. Although condemned by the Nagar Brahmins at first, once they recognized his truth and love for the Lord, they sang his glory like a modern day Mirabai.

His works Hundi (Bond) Haar Mala (garland) Putra Na Vivah, Aakhyan, Prabhatiya, Hari Saame Na Pada, Jhari Na Pada are some of his well-known padas. Despite his huge collection of works, the poet’s works are not available in the language they were originally written in. They are orally preserved and thus have undergone many modifications since the times they have been written.

A man despite of being uneducated has thousands of people doing a Ph.D. on him truly shows how this pioneer of Gujarati Literature gave birth to a genesis of what would be used in our ‘educational’ texts to educate others; Love and dedication to the divine.

His poems revolve around the awakening of love, the Lord’s miracles and constant dedication towards the Lord. His verses are believed to have the secrets of Vedas simplified and revealed to mankind to follow and be enlightened without barriers of access to such rich scriptures for common man.

‘Unchi Medi te Mara Sant ni re’….or ‘Vaishnav jan to tene re ka hi ye je’…gently tiptoe into our minds sprinkling this revered poet’s showering of love on our memory slate whenever we think of singing the glory of God in the form of bhajans. This is how synonymous Narsinh Mehta is to Lord Krishna…devotee and God blending into one….