The Khoji Returns with ‘Poetic Renditions of Existence’

Seema Kohli of Delhi is not unknown to Ahmedabad even as she came and conquered the town by starting her first solo show at 079 Stories the past weekend. For record’s sake, Seema actually debuted in Ahmedabad last year in March at the invitation of Petal Foundation-Art e Fair with a performance and an interaction with the invited audience, which is when a few of her works – Etchings about Lord Mahavir – were put on show for the Day alongside at the venue. The “experiential performance” coming from a visual artist with her co-dancer had created a buzz of sorts, more so for the selection of its off-beat venue in a car showroom. 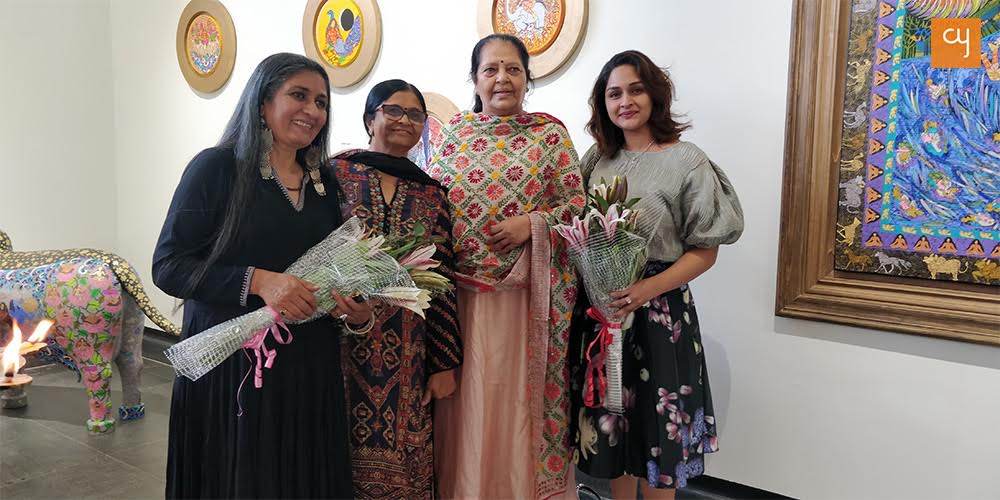 Coming to the show titled A Moonsong for the Sunbird; this was inaugurated at the buzzing 079 Stories on Saturday, August 31. Possibly her 33rd Solo, this one in Ahmedabad comes in collaboration with Mumbai-based Tao Art Gallery after Seema’s appearance at all major metros in India, at several prestigious art destinations and the world capitals from Melbourne in the Fareast to New York in the West, also covering places like Brussels and Venice with a few participations in the international Biennales thrown in, in between!

Known for her women-centric work inspired by mythology and Indian scriptures, Seema has and continues to work with many mediums and many forms creating her own niche and unique style along the way. In line with that perception, the show Moonsong is ‘built around the interconnectedness of the vast web of life and the central role of feminine energy in human and cosmic understanding.’ 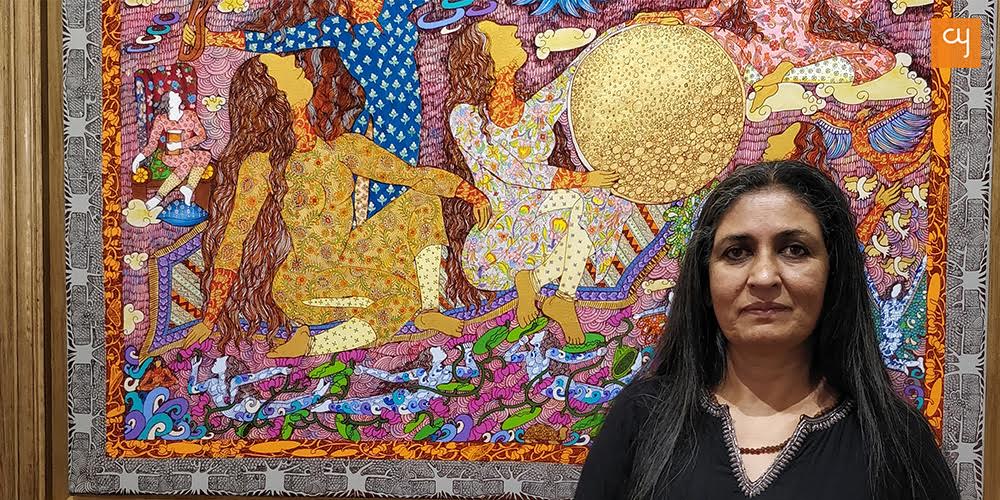 It does not need a leisured move across the gallery and at the present show to understand the richness of the multi-layered narrative that the artist paints into her much-laboured works, for it’s all too visible! Most of these are creations in acrylic paint, inks and 24 carat gold and silver leaf. What is common to most works is that they all vividly project Seema’s signature style replete with rich detail, fancifully coloured human forms that just extend with or tend to fly with wings, of layers and layers of objects that are enclosed to exquisitely done motif borders all around the frame.

Such intricate detail of layered narrative challenges the viewers’ own imagination and cultural-contextual conditioning while they try to relate with these mystical works beginning with the point of take-off hidden or revealed in the title. This, even as Seema says “I’m a mirror. When I paint you see not what I have made but what you want to see.” She goes on to add “I’m both myth and reality. Pick the one you want, but remember, the mirror distorts, and so the myth might be reality, and reality myth.” 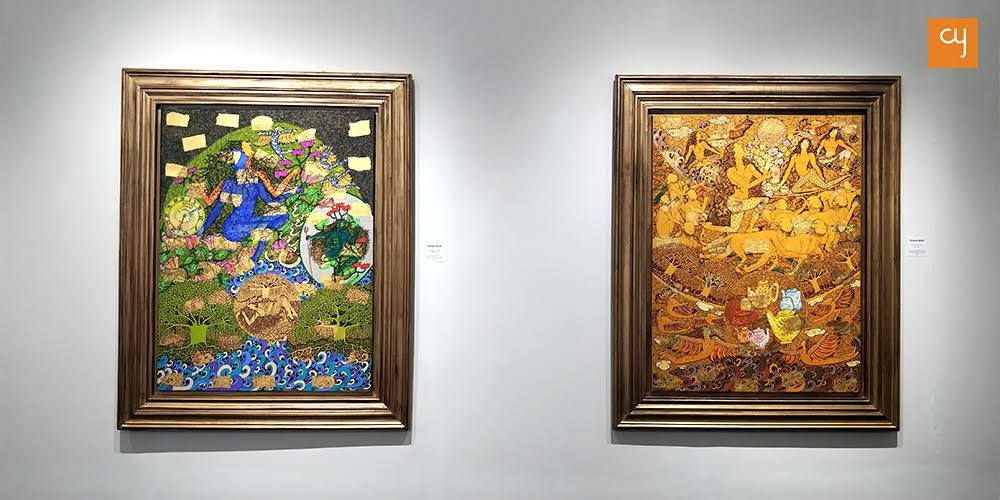 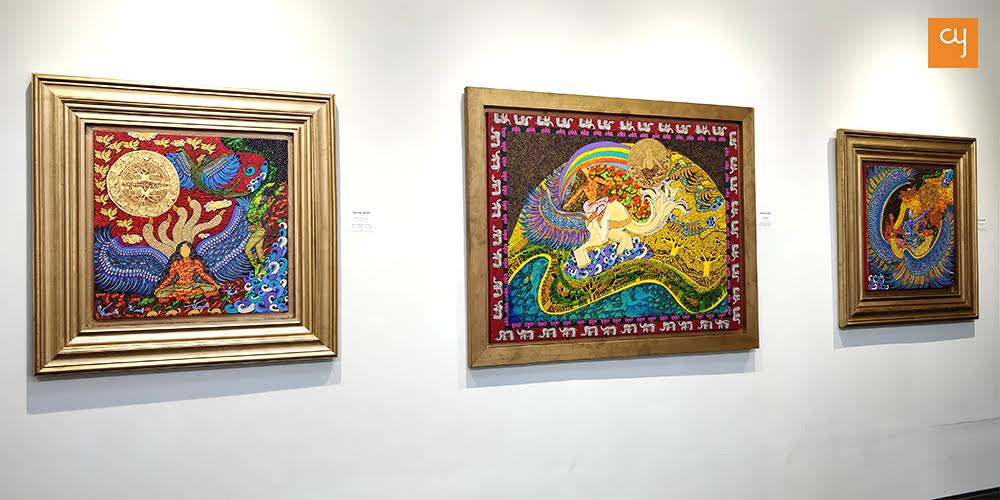 The show features first and foremost a set of five round works from her now famous Golden Womb or Hiranyagarbh series, which are interpretations of the creation of the universe as per the Vedic philosophy whereby the Hiranaygarbh is thought to have floated in dark vacuum before exploding into two halves to create the prithvi and the swarg. There are two more works in the same series shown elsewhere in the gallery. Visually enchanting, these works portray women juxtaposed to one another in a manner that hints at the two halves of the golden womb. Two huge works titled Krishna Raas are quite engrossing with their styllised depiction of Krishna – who is known to cast a spell while in Raas – as a winged charmer and an in-spell Radha sporting a plumage akin to a bemused peahen! 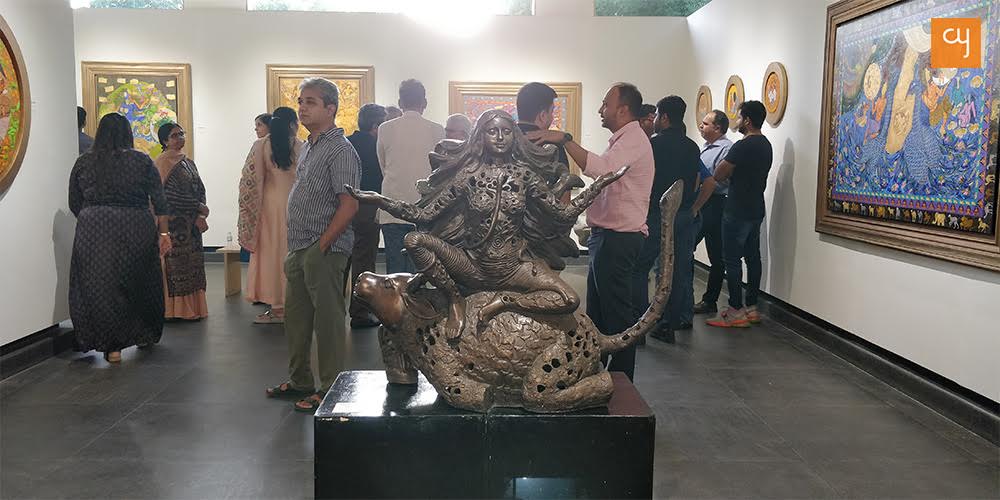 Cosmic Strides, as the name suggests is a depiction of out-of-this-world ecstasy atop an elephant. Mahishasur-mardini is a double bonanza in a single frame where Goddess Durga is astride a lion on her trip to kill the infamous demon we all know, but the demon is not included in the frame here in a departure from what is the popular metaphor of this theme. Moon Myths Nakshtras draws on mythological depiction of Hindu astrological nakshtras. One of the four in this series, Ravathy riding a chariot driven by seven horses also tends to take a viewer to the more popular imagery of sun’s chariot driven by his wife. While there are many more bigger works on show and of them Khel, Sankirtan, Allegory of Creation, Vision Into Eternity, Pour Me a dream, etc instantly stand out to the visitor. What’s also an eye-catching is a series titled Memoirs that are Zinc plate etching Prints of 4”*4” on Fabriano paper. The well-framed series of 32 dwells on themes from mundane to sublime, from subtlety to sensuality, all in very affordable prices. 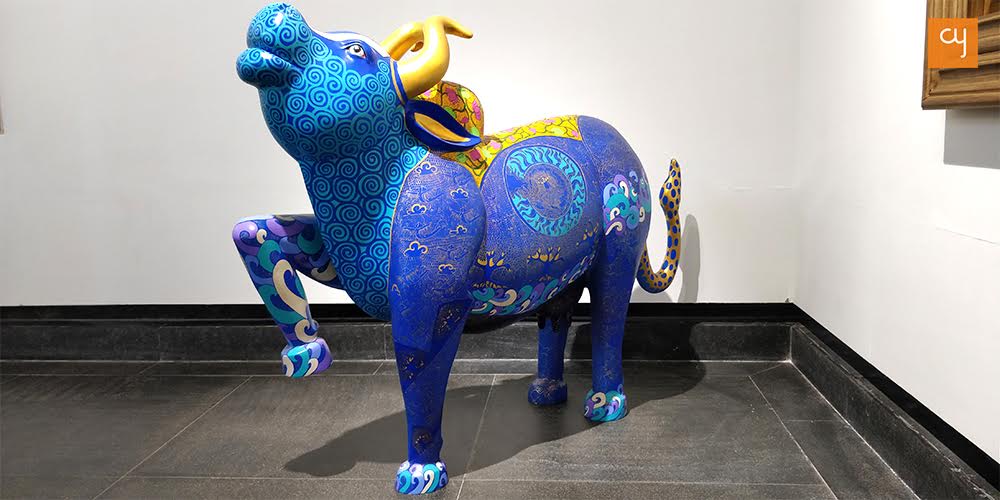 The show also includes a number of sculptures in Kamdhenu series in fibre-glass painted in acrylic as also bronze sculptures like Riding the Waves of Wind and Waters, which form very fascinating studies. A must-watch show, this will be on till October 05.