Opening a window on the myriad colours of Dangs

Geographic regions or cultural-ethnic groups as artist’s fancy are an accepted and popular trend in the art-world. Evidently, we see artists-photographers dwell on and recreate their studies and interpretations of places like Laddakh, Benares, Kutchh, deserts in Rajasthan, Naga Sadhus, and walkers on religious trails; while internationally places like Egypt, Alaska, Machu-Pichhu, African tribes perhaps remain sought after. In keeping with this fancy in our own part, we have seen a good number of artists foraying into their artistic expression by visiting Benares or Kutchh at regular intervals. The hill station of Saputara has also found its place with photo-artists.

In perhaps a comparative new for paintings, an artist has covered the tribal region of Dangs in our own state and returned with some fabulous impetus for her paintings and drawings. The young, prolific and popular painter-activist who also runs a social platform for artists and arts, and yet a very modest Bhairavi Modi is showing her works in the city based on her experiential encounters in the region beginning 2014.

The ubiquitous Archer Art Gallery, the efficient art enterprise by the father-son duo of Anil and Manan Relia is hosting the well-designed show that began on Saturday, the 7th September.

This 9th solo by Bhairavi that centers on a single cultural theme is a class apart in its scale, range and visual appeal, even as it retains the essential mark of the artist who in turn bears her visible influences from artist-mentors like Nabibakhsh Mansoori. 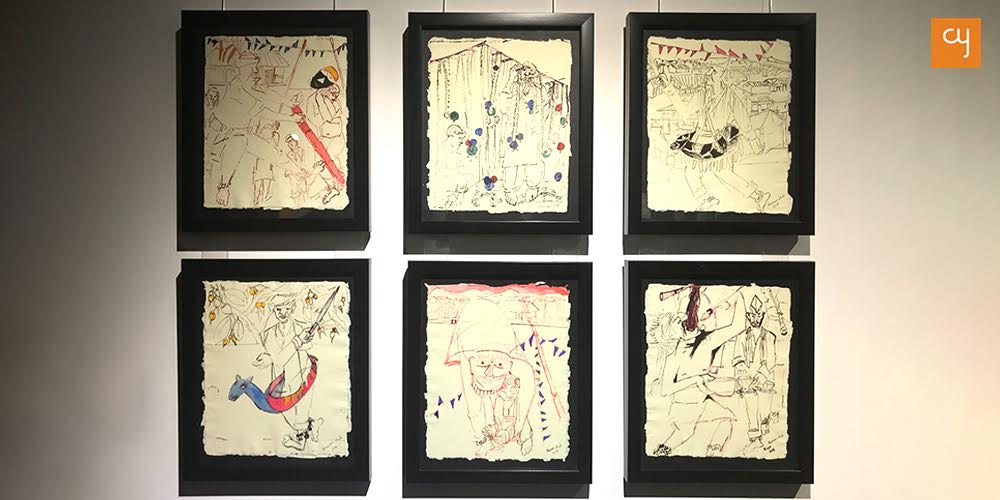 The show comprising some 30 oil paintings, 40 drawings in ink and more than a dozen masks ably opens a window to the traditions of the Dangs region, bringing out their love and reverence for their deities, their ways of celebrating life, their modes of entertainment in dance-drama and musical forms and the general customs in their day to day lives. While Bhairavi does it in a visual idiom which is a blend at the visible manifest plane, she also puts her finger through a ‘sub-text-of-sorts’ on the ‘strains’ their eternal relationship with nature is suffering, so thinks Prayag Shukla, the veteran art critic from Delhi who has encapsulated the artist’s work in the series alongside Sandhya Bordewekar.

Some of us may really not notice the undertones of these strains but the very clear celebratory overtones of the works are unmistakable! The works have been accordingly categorized by the gallerist-curators in about four distinct sections, namely Bhawda, Belpoda, Holi and Dungardev sections. As for forms, the works are oils on canvas with a few as Diptychs, drawings in ink and paper-machie masks used in the folk theatre of the region. The exhibition also puts on show the terracotta crafts of the region to showcase the practice as a side. 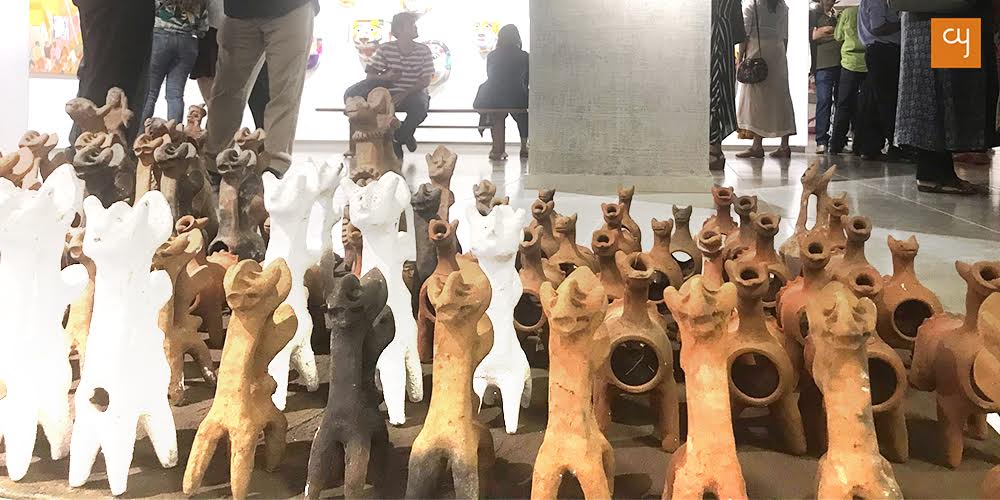 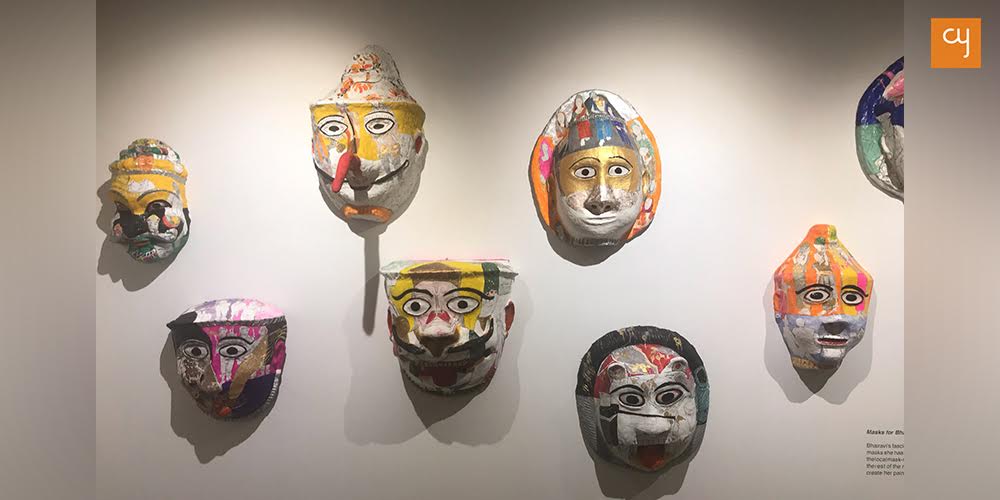 The colourfully speaking masks numbering about 15 have been prepared in collaboration with the local artist Shivabhai Choudhary, which have been painted in acrylic by the artist to add another dimension to the mythological and puranic characters these masks represent while performers wear them in the form called Bhawda. Choudhary, we understand from the artist remains a nodal point for coordinating the periodic celebrations of the forms on a rotational basis in the region.

The Bhawda section relates to the mask dance of the region which seems to have its roots in the adjoining areas of Silvasa in the union territory of Dadra & Nagar Haweli. A look at these exotic masks reveals that interestingly Narad, the wandering sage-messenger finds the most number of variants among this lot, while the demonic is represented by Tarkasur and Chanchiyasur. Valmiki, the writer, Sita and Jamvant represent the epic Ramayana while Narsinh of all stands for the legend of Dashavatar.

But the best that relates to Bhawda is seen in the characters painted exuberantly in almost the life sizes. Of these, the diptych paintings of Agya Vetal and Hanuman, the interpretations from Dhodhalpada performances; works titled Bahurupi Tati and Ravan Tati representations of Chikadi and Dhodhalpada performances are the most mesmerising visual treats. Interestingly, the legend of Shravan also finds a place in the performances as also in the series as a work of drawing. Another interesting character is Tugu a local equivalent of Lord Kamdev, the God of love, libido and lust who remains a big draw among the youth at the festival and has been justifiably picked up for a nice painting by the artist. 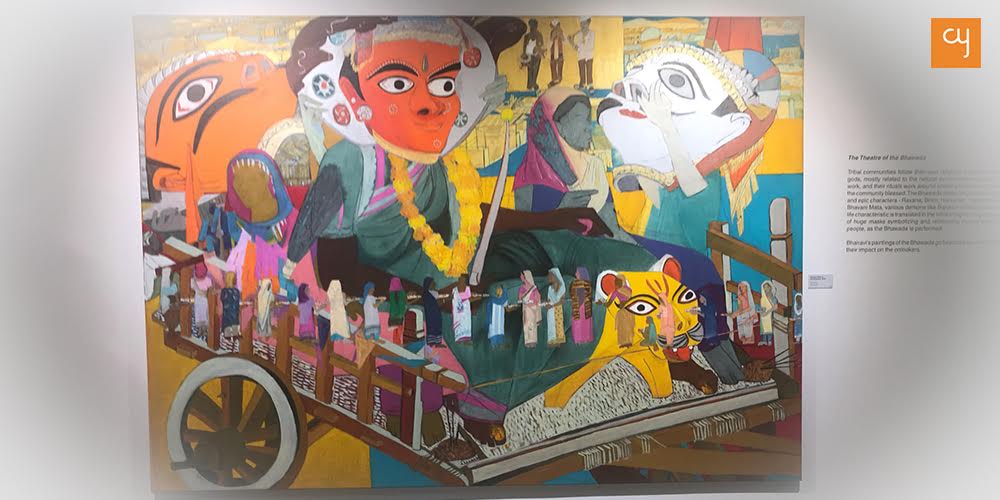 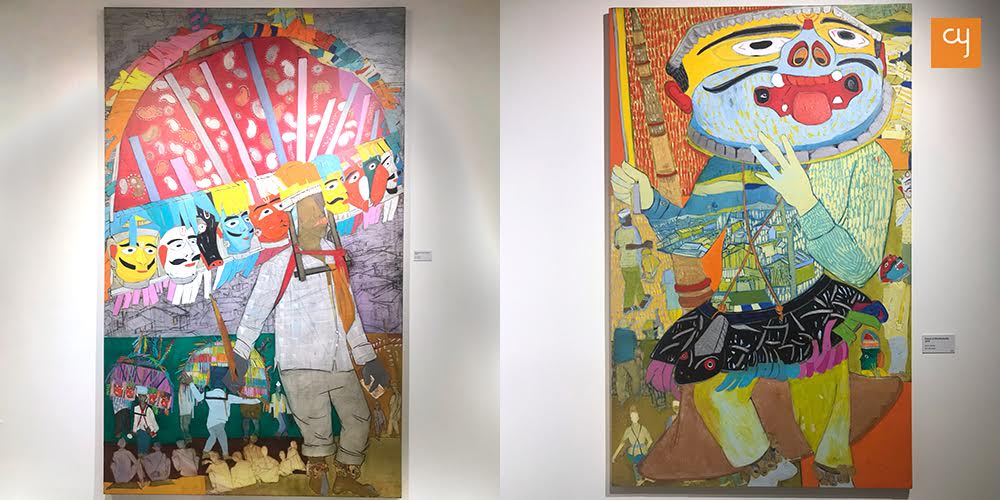 The equally enchanting works in the other three sections similarly bring out the love, devotion and obeisance of the local populace to their deity the Dungardev, the Hill God or Rock God implying the one whose abode is on the hills and one who is considered the protector of life in all forms; the love for their animal kingdom, mainly the bull that traditionally remains the means for agriculture and transport in the hinterlands; and finally the Holi festival. Bhairavi’s studies of the Belpoda, the bull as inspired by her encounters at Datta village and Haat at Kansara village and others like Dinner, a Triptych all provide insights and visual delight in her chosen themes.

A very appealing body of work on and about Dangs, its people, their traditions and a neatly mounted show as is the wont at Archer, which has just completed one year at its new space, this show is a must-watch for art buffs and even the uninitiated; for, it’s the collections like these in realistic forms with an elevating touch of the unique style of the creator that can enhance the love for fine arts among masses. At the individual level, this one must prove as one that puts Bhairavi’s stable appeal in an even higher orbit. Her works from the Dangs collection, in fact, are already showing up in the cyberspace thanks to some instantaneous groundwork by her agency! So not to be missed, this show is available till November 06 and repeat visits are not ruled out!