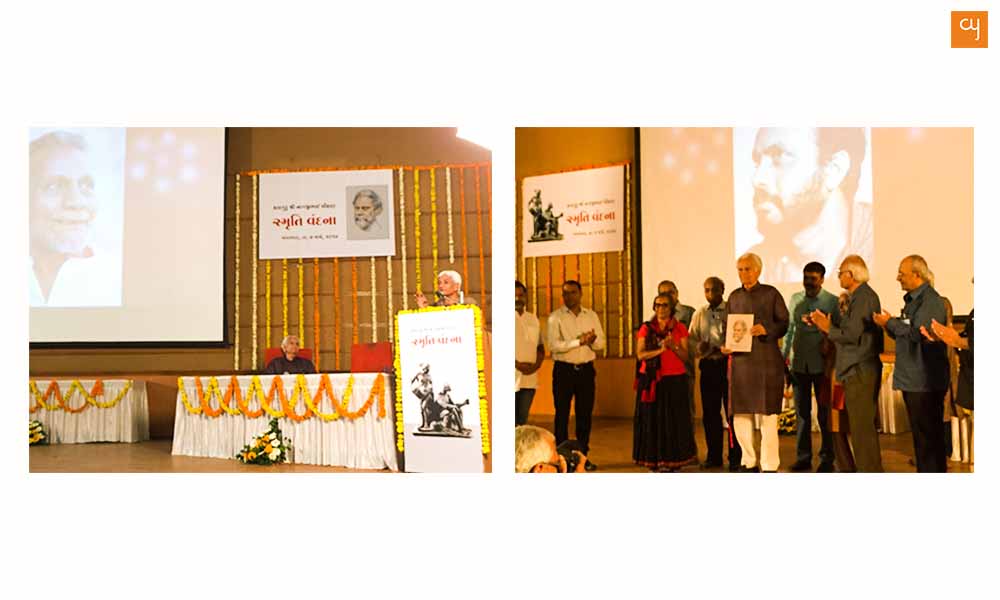 With hidden gems of art curated by loving students of Nagjibhai Chauhan, a real revelation is on display at Ravi Shankar Raval Kala Bhavan that compares well with the works of the great Surrealists and Impressionists.

Name a teacher who changed your life. A teacher who was liquid in his transition from being mentor to friend to partner-in-crime. If you ask me, it would take a few moments to think of a teacher, if any, who has been present for me this way. But here is a group of men and women assembled from all over the country, who have come together for the sheer love of a mentor – a mentor without whom they wouldn’t have become the successful people that they are today.

Nagjibhai Chauhan’s Smruti Vandana was an experience to behold. It was astounding to see the number of people who owed their art to Nagjibhai and had come in gratitude, to honour their fallen comrade. It took me a while to look around and see that there were more than 200 people in the auditorium, across all ages. The place was full of artists we know and love today, from Manhar Kapadia to Bhanwar Singh Panwar.

The evening opened with Guru Vandana and Shastriya Sangeet by Chandrakant Kansara. He transported all the people present there to a land of peaceful settings and quiet conversations. Words of Kabir, Meera and Tulsidas vibrated an ethereal aura throughout the auditorium.

What followed can only be described as a fond walk down memory lane. Raghuveer Chaudhary, the celebrated litterateur, began the evening by talking about how he met Nagjibhai – about how they became friends – with the experience teaching him that all art is connected. Be it through writing a novel or producing a play, he opined that art forms a spectrum of interconnected strings, which begins with painting and ends with Shastriya Sangeet. Chaudhary’s personal journey with art began with painting and Nagjibhai.

One by one, students came up, talking about what Nagjibhai meant to them, as for many of them, he was the one guiding force in their lives. What struck me the most was how all the journeys of these people – who are renowned today – began at the same focal point. 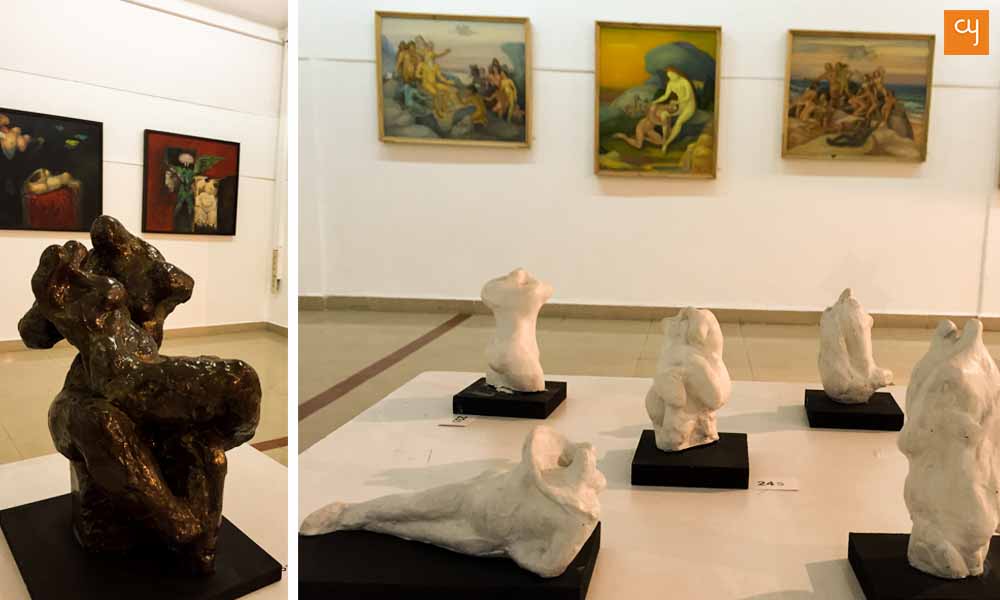 But the real surprise came the moment the doors to the exhibit were opened. Rarely do you come across so many paintings at the same time at the same place. With more than 100 paintings at the Ravishankar Raval Art Gallery, Nagjibhai’s plethora of work is spectacular, to say the least. One can see how learning and teaching each technique has given him an edge. His paintings are multilateral. There are layers of colours and each layer has a different interpretation to it. Beginning with pen on paper, his sketches are so detailed that they look like lithographs. He uses scribbling, scratching, pointillism and shading, all at once, to create breath-taking pen artworks; his subjects – the persistent human emotions. An expert in abstracts, one recurrent theme in all his paintings is that of conflict – be it conflicting emotions, or actions or even colours. His study of art, representing conflicting human emotions, is intense and surreal at times.

The first half of the exhibit was of Nagjibhai’s studies in pen on paper and Indian portraits which, from afar, look like European-commissioned portraits. He has used the style and strokes characteristic of the European spectrum, but done these in Indian colours, to create an altogether new effect. “These portraits are the only ones in this exhibit wherein you can see faces as Nagjibhai worked more with abstract human emotions, painting figures and emotions rather than faces,” says Sulekhaben, a student from the first batch he taught. 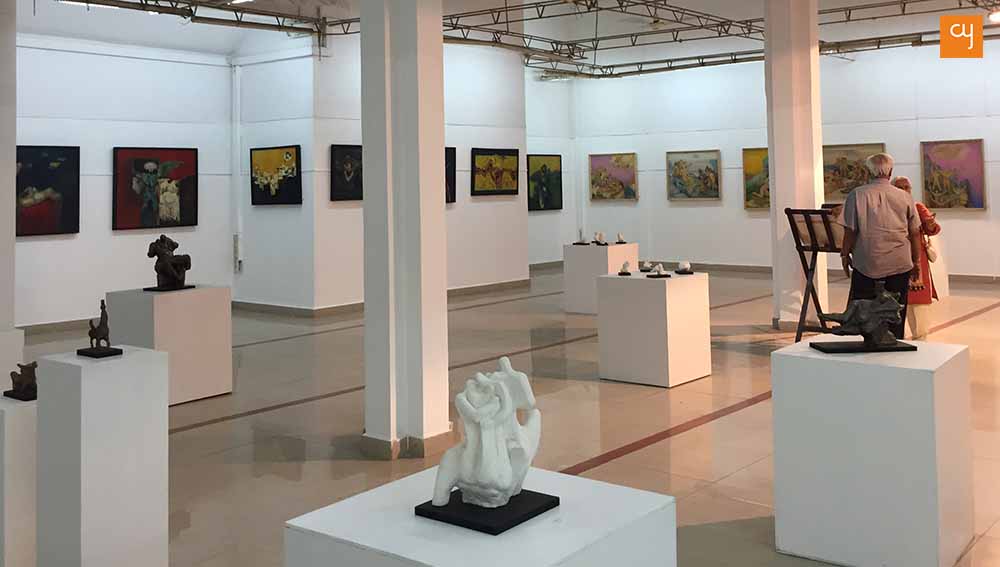 Nagjibhai’s spectrum of art is varied, with the exhibit displaying pen sketches to bird studies, realistic watercolour on paper as well as surrealistic acrylic on canvas. There is nothing that Nagjibhai has not experimented with. His range goes all the way from pointillism to surrealism, ending in Impressionism and Renaissance style paintings that look like they come straight from Dante’s Divine Comedy. These paintings are like a study in human anatomy, with the human figures so well done that they look as real as they can be.

What was truly remarkable though was the grasp Nagjibhai has on surrealism. The second floor of the Art Gallery is filled with Dali-like surreal paintings and the more you see them, the more you wonder why you have never seen them before. These paintings are not for the average observer. They are sometimes frightening, sometimes angry, sometimes just incredibly thought provoking and it would take a true artist to understand the depth of these paintings. The vast range of abstracts Nagjibhai addresses in one painting, with bold colours and forceful brushstrokes is just remarkable. He could be as famous as Dali, yet he is not. His paintings show such firm grip on technique and emotions that it is surprising he isn’t better known. His art can be put next to any internationally acclaimed artist and stand alone in pride. 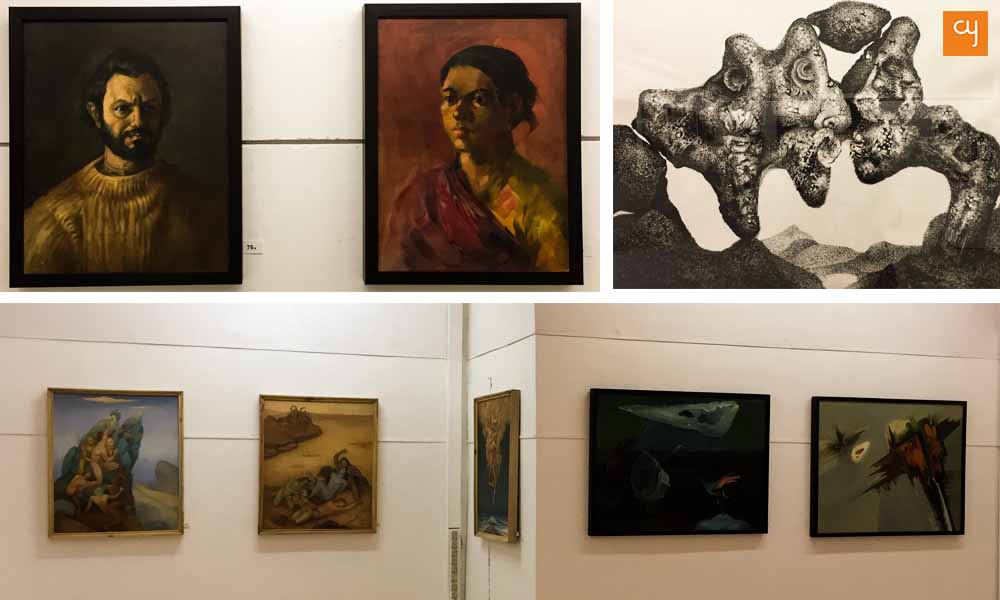 Nagjibhai’s students have published 1000 copies of a book in which you can find some of his art and memories to go along with these. It takes a lot of love and adoration for students to come together and honour their teacher in this way. A heart-warming gift, this exhibit is a must visit. You will find gems here that have been hidden forever, and art that will speak straight to your soul.

Sponsored by Lalit Kala Academy and BJ Desai, the exhibit is open at the Ravishankar Raval Kala Bhavan till 12th March, 7:00 pm.