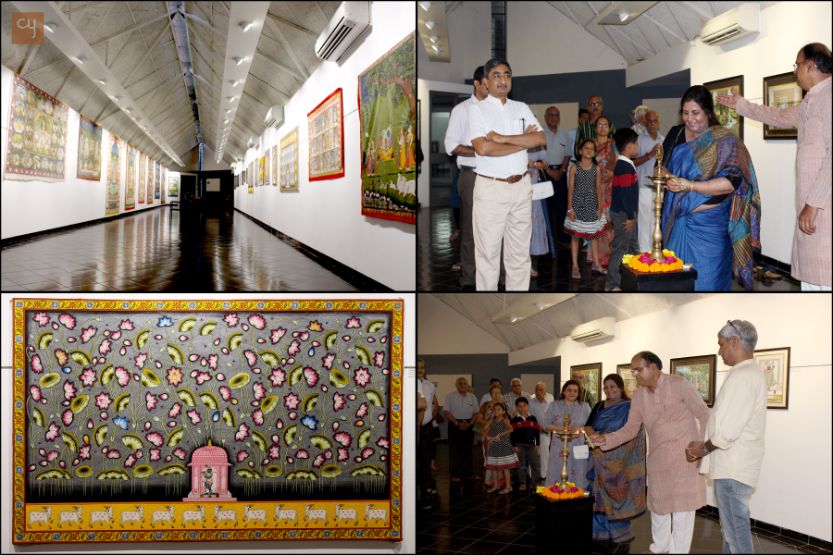 On the eve of Janmashtmi, Amdavad ni Gufa is offering Amdavadis a treat with an exhibition by renowned Pichawai artist Shri Trilok Prakash Soni titled “Darshan: Shrinathji”. The exhibition was inaugurated by Shri Sanjay Lalbhai on the 23rd of August and can be visited till the 28th of August and is open from 4pm to 8pm. The exhibition is presented by Archer Art Gallery.

The exhibition showcases around 30 works of art done by the artist in a variety of styles. They show the artists range, with some in the miniature style to others in the traditional Nathdwara style of painting. Some of the paintings are completely traditional while some show a contemporary influence.

The artist is a renowned traditional painter who received the national award in 2012 for his devotion to Pichawai. His works can be found in many important collections; in fact, his work is also displayed at the International Terminal of Mumbai Airport T2, which can boast of one of the widest displays of art collections in the world. 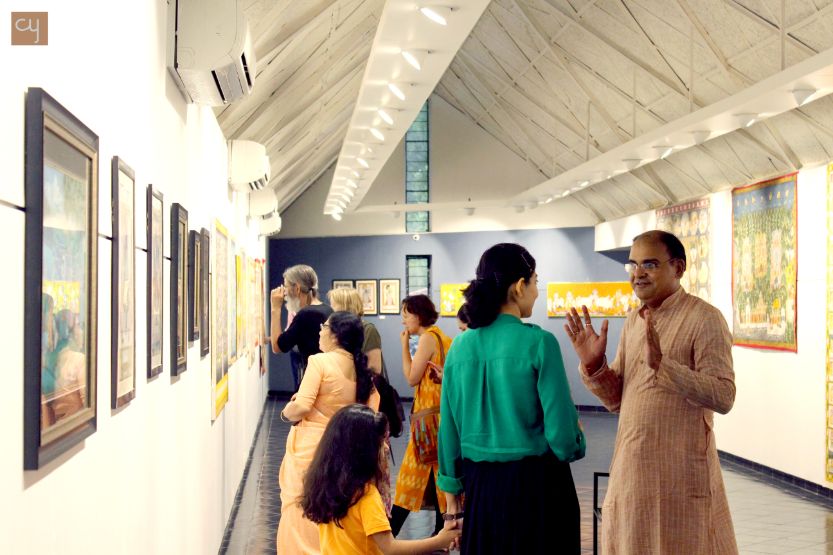 Shri Trilok Soni comes from a family of artists and was trained into paintings by his illustrious father Shilp Guru Shri Badrin Lal Chitrakar, a miniature painter himself. Though he may not be formally trained in an art school as such, his training was no less rigorous. He was given an education in every element of painting and given a thorough understanding of the different processes that go in creating these wonderful artworks.

During his training period in the town of Bhilwara in Rajasthan, he spend long hours in understanding every aspect of painting ranging from material procurement and processing to the intricacies and variations in different styles. As an established artist today, his forte lies in Pichawai painting which is very different from the path trodden by his father and others in his family. With the changing times he has started experimenting a bit with the subject and compositional setting, but doesn’t experiment with the aesthetics and traditional grammar of the Pichawai painting.

He uses the traditional techniques in which organic and natural pigments, as well as stone pigments along with gold and silver is used to create the paintings on cotton cloth. The tradition of Pichawai is such, that they change the paintings in the temple as per the festival and season. 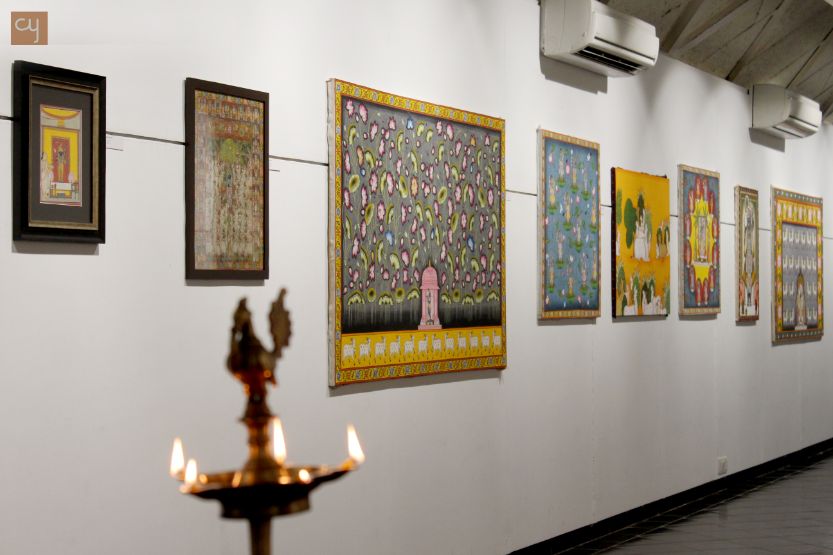 The painting was earlier done exclusively for temples but today people get them for their homes, either for the home temples or living rooms. Some of the paintings have been given a dated and antique look to make the viewer feel that he/she is transported back in time.

He has also experimented with canvas and contemporary colour palettes in some of the artworks, but his heart still is with the traditional styles and he feels that the contemporary works don’t have the same feel as the modern and lack the softness.

The Pichawai as an art form is a showcase for the many themes and events associated with Krishna like Daan Leela, Gopalashtmi, Shrinathji, Balagopala, Radhakrishna and Gopis, Sandhya Aarti, Sharad Purnima and 24 Darshanas of Shrinathji. It is normally done on cloth. The paintings on display vary a lot in their dimensions, ranging from 13 by 17 inches to 80 by 94 inches.

One of the visitors to the exhibition, Mr. Amitabh Teotia said that he was fascinated by the works and that Mr. Soni gets the age, finish of the paintings just right and the works are beautifully intricate. Mr. Teotia keeps a Pichawai of Shrinathji ki Haveli done by Mr. Soni on his office wall.

One would say that the exhibition is a must visit for everyone, the exhibits are also available for sale to collectors.