The artist duo Nayan Shrimali and Vaishali Chudasama made 365 miniature birds over more than a year. They present 120 of them from the Mini Nature Project at Amdavad ni Gufa, till May 26. 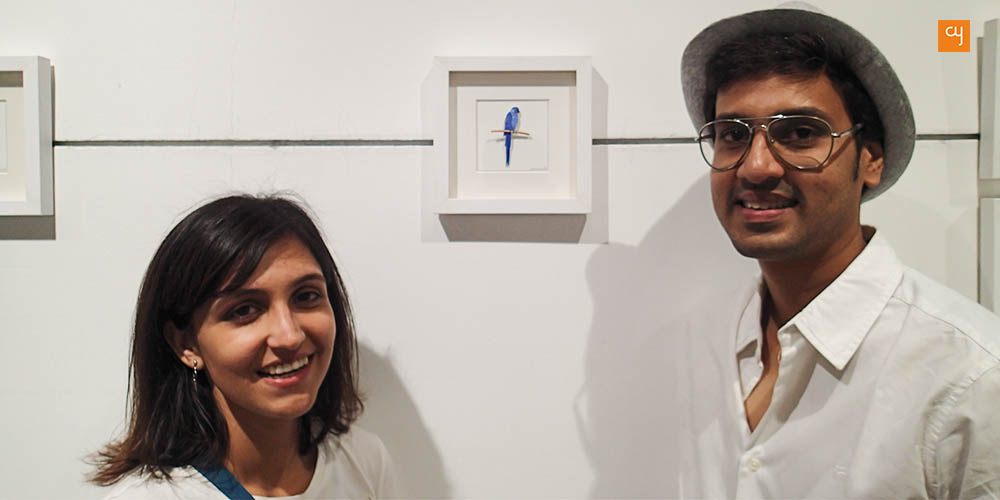 A GiNiPi Art presentation the Mini Nature Project started at the Amdavad ni Gufa on Wednesday, May 22. It is not only an art show with a difference but a tribute and clarion call to save the birds and the animal kingdom on Earth, some of which have gone and some of which are now on the verge of extinction!

The opening of the show, which was based on miniature bird paintings – nay, cute little paper cut-outs in colour – painstakingly created by papercut artists Nayan Shrimali and Vaishali Chudasama, coincided with International Biodiversity Day on May 22. By consequence of that, the show also coincided with the circulation on cyber space of a huge petition to save the planet that has generated a massive mobilisation of 2.5 million signatories across the world. Yet another chance event Sparrodium, in Ahmedabad, has sparrow man Jagat Kinkhabwala doing a workshop in the city on Saturday to acquaint citizens with the winged creatures and what they mean for the ecological balance! There is also a small group in our extended social circle that is planning a visit to the Amazon Forests in the coming monsoons to have an encounter with the wide biodiversity and wildlife that the region sustains; that barely survives now in its original glory in just a few zones of the world.

Inaugurated by Advocate and art collector Ajay Mehta in the presence of Arijit Mukherjee, Natubhai Parikh, Giriraj Kadia and others, the show features about 120 of the 365 works created by the husband-wife duo since January 2018. Spurred by the disappearance of birds from their local neighbourhood, which was seeing a lot of building activity, the duo started looking for them in other areas and soon decided to paint them as they became conversant with the different varieties and species within the local bird kingdom.

They resolved to paint one bird each day for the next one year, and the idea of having a show at the end also crystallized alongside this. The interest in birding also brought Nayan and Vaishali in contact with other more knowledgeable bird watchers. As one thing led to another, it also inspired them to watch videos and films on the subject on satellite channels and YouTube and thus began what they describe as their “derivative art”. The geographical barriers were soon broken as Nayan and Vaishali became aware of birds beyond Indian borders, started drawing them for their repertoire and eventually included some of them in the show! 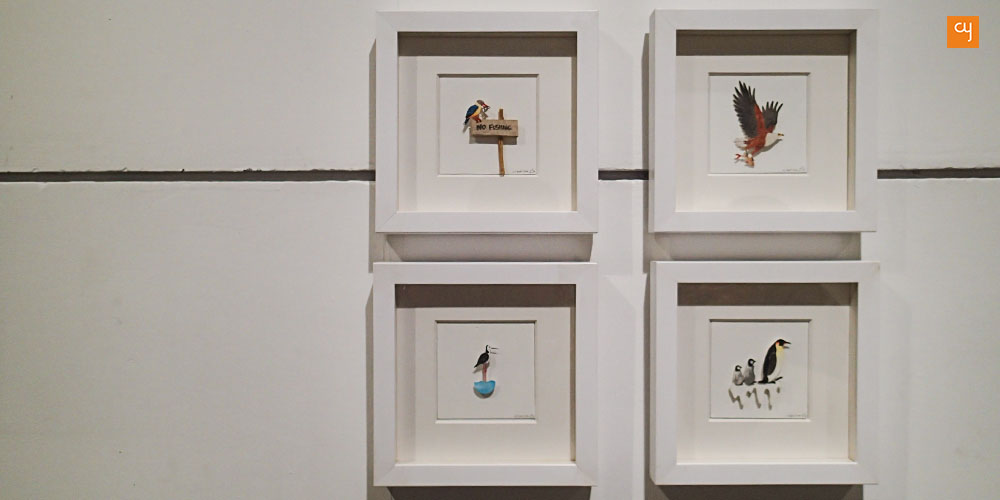 All the results were showcased finally with the support of GiNiPi Art of Ahmedabad and Art tune of Kolkata, who provided the artist duo with the platform and requisite resources to create and mount the show for art buffs, bird watchers and others concerned, in a bid to motivate them to relate to the issues of imbalances in development and the huge losses already caused. This damage to the flora, the fauna and the vital eco-systems of the planet is in fact continuing, while there are only feeble and slow-paced attempts in recognising the loss. The petition fears that two-thirds of wildlife on earth is poised to be lost by 2020. What we may save by the quickest action will still be scant.

The works of the artists were created as miniature drawings for a purpose – to save paper! Painted in watercolour on non-acidic watercolour paper, the actual painted figure of each bird has been cut out in its shape and then neatly mounted on a small base paper and put in tranquil-looking white frames. The birds look cute and lively, each one perched as it is on a small branch of a tree in most frames! Even though the labels for the works were not ready and therefore not in place to describe the works on the inaugural day, one could figure out many of the birds from their true and exceptional renditions in colour! So you see lovely colour drawings of the common sparrow, the crow, the parrot, the kingfisher, the cock, the peacock, and the dolphins; and then may need some help in identifying a budgie or a similar alien bird. Similarly, you can see in the animal section a slow tortoise, a jumping kangaroo, a cute rabbit and an equally cute panda, an unfamiliar capybara of the rodent variety or a lazy lion or tiger come alive on paper.

The works are meticulously done by Nayan, who is a trained designer, and Vaishali, who has pursued animation studies as a degree. The presentation of the show is superb. The two artists have worked on designs for fashion and other institutes in the past, as also created some portraits over the last few years, though it was reserved for the birds to give them their flight into their first show! The works are not only worth a good and close watch – with a magnifying glass, if you please, which is provided on the venue – they are very attractively priced too, between Rs.5500 and Rs.9500. The show is on till May 26.