The Truth of Opposites- Hindol Brahmbhatt 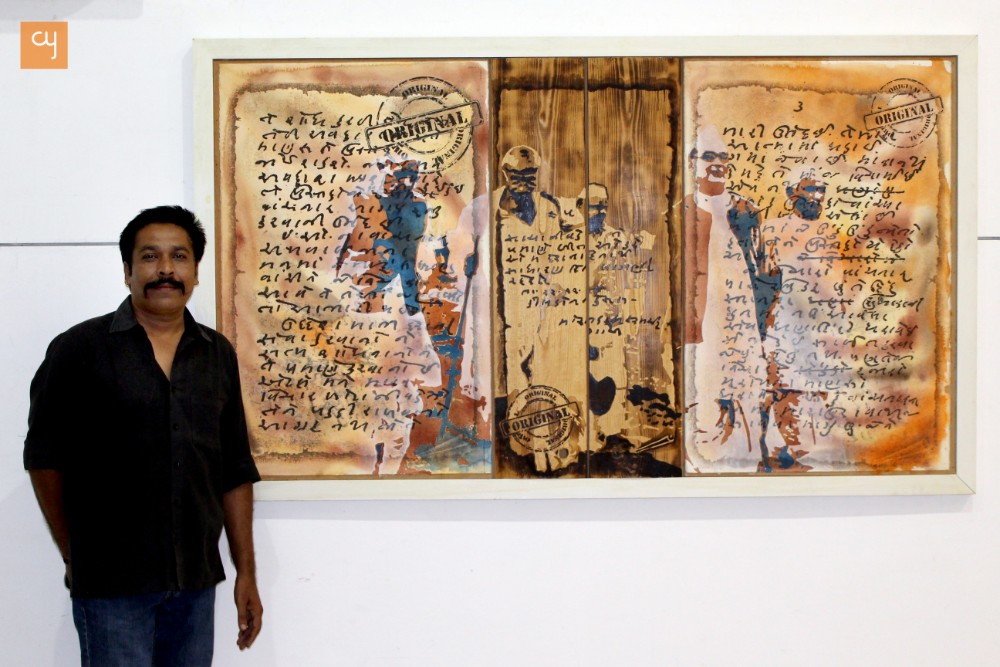 147 years and still the Father of The Nation and his learning are engraved deeply in every man, woman and child’s heart. On the tranquil day of Gandhi Jayanti, Kanoria Centre for the Arts admired the eve in its own artistic way. Hindol Brahmbhatt the renowned Gandhian artist and a Bapu believer spread a wave of creativity with an exhibition inspired by the philosophy of the father of the nation. The exhibition was grandly titled as “The Truth of Opposites”, and it exclusively included an informative soliloquy by the noted Barodian artist upon his life, work, passion, and inspiration.

The new generation is a firm believer in the truth of opposites. For every claim, the opposite can also be true rather than cancelling each other out. –  Jeram Patel

Hindol embarked his artistic journey from Maharaj Sayajirao University, Baroda, where he completed his B.F.A prolonging with a Post Diploma in painting and learnt the right way to build aesthetics from prestigious mentors of Fine Arts. He initiated his artistic journey with city-scapes and gradually crafted his work towards Mahatma Gandhi and his philosophy. Since then he has exhibited his phenomenal creations not only in India but even on numerous international platforms too. 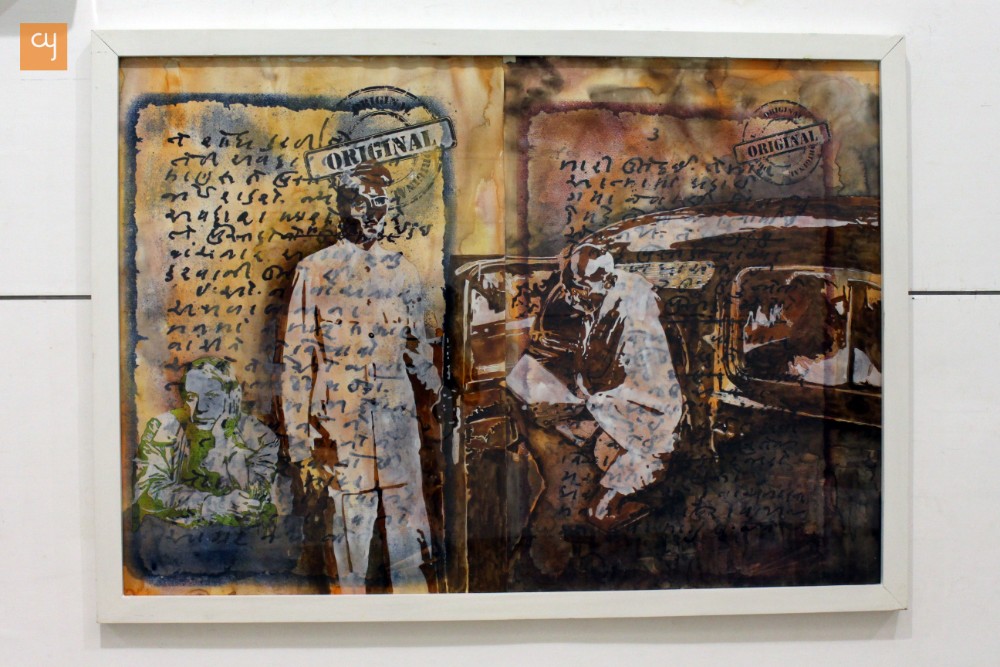 Juxtaposing Gandhiji’s images with global icons and images of strife and violence using pop art and imagery is one of his niches.

His first ever Gandhi art show was held in the year 2006 and since then he hasn’t looked back. He brought the contradictions and connections of life through Gandhi and juxtaposed him with influential images like Warhol’s Marilyn and Kennedy. His early work on Gandhiji was also influenced by the realism phase in Indian art during the early 2000s. Being a senior artist Hindol never compromised in updating his skills and frequently involved technology and computer prints within his work practice. Using persona of Gandhi with his wife Kasturba in his artworks, Hindol has created a distinct collection of art pieces, because surprisingly there aren’t many paintings of the duo together. 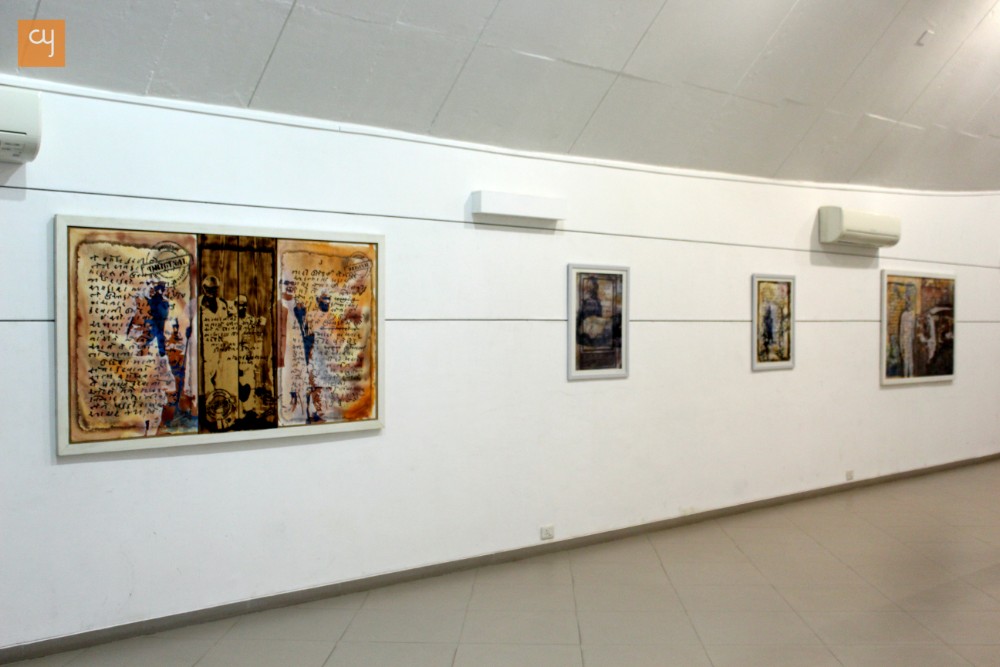 With an inspiration from the works and sculptors of Anselm Kiefer, noted German painter Hindol has used wood and experimented with different mediums like watercolor on wood, plexiglass on wood, computer prints etc extensively in his art.

This time, Hindol has taken simple photographs of Gandhiji’s day-to-day life activities and juxtaposed them with letters from Hind Swaraj. These beautiful and moving paintings, the total of 8, display the Mahatma’s philosophy of simple living and high thinking. The paintings have been excellently rendered on wood and Fabriano paper and it is a delight to walk through the passage as the music, Gandhiji’s favourite bhajans were mesmerizing the audience in the background. 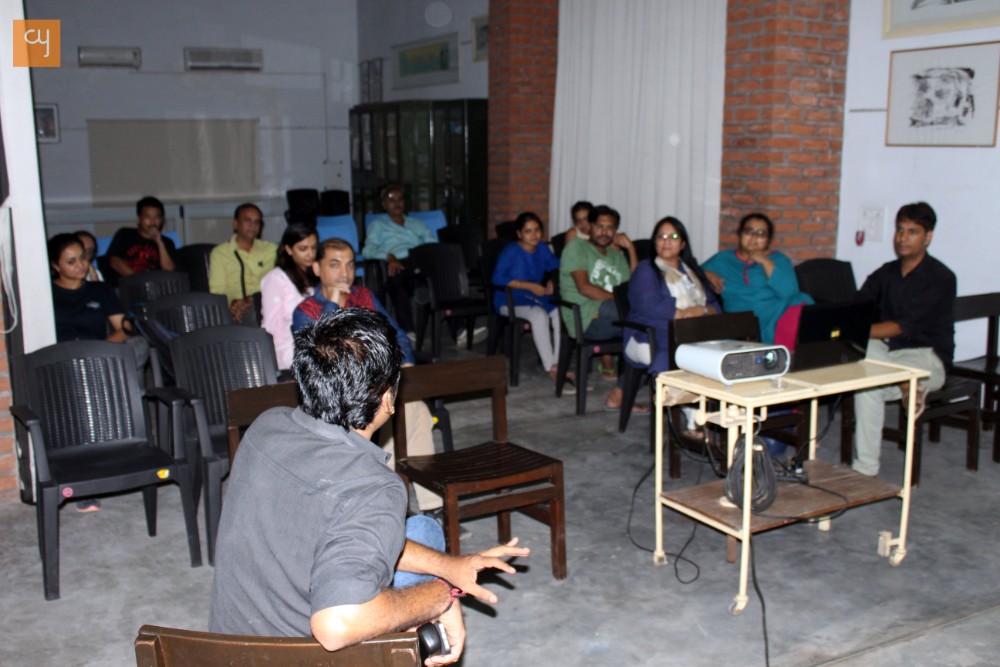 The artists’ lecture was an enlightening and enriching experience. He threw light upon topics like what influenced and inspired him and discussed his thought process while ideating a piece of art. The simple living, using Khadi, rotating Charkha and humanism as a man’s foremost duty has transmogrified Hindol’s life.

Jeram Bhai has been a moving personality in this Gandhian Artist’s life, and mentioning Jeram Bhai’s quote would be a subtle thought for concluding Hindol Bhai’s article, hence, “The artist forms a language beyond words and sounds; A language that calls for continuity and intuition. This infinity of composition reminds us that each work is a part of a greater body of images of evolution, growth and creativity and their secret messages do not demand to be opened and solved, and instead they are allowed to exit quietly without question or analysis.”