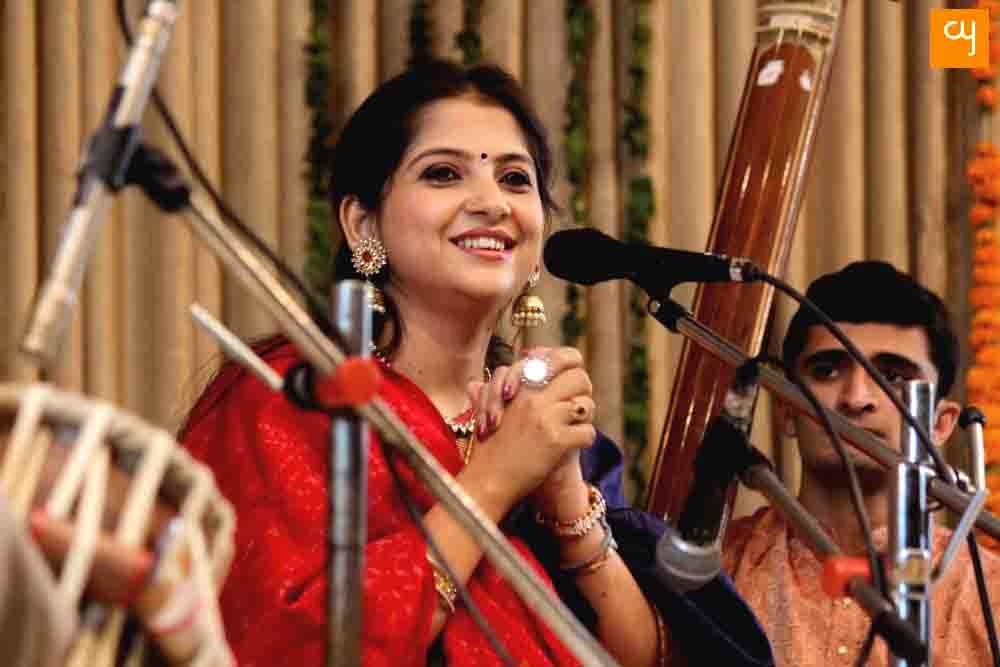 Kaushiki was the  rock star of the 11th day. She mesmerised the audience  with her flawless presentation and mellifluous voice. She came with compelling proof that exhibition of mere skills, void of artistic presentation is not music. She involves herself in the rendition to convey the nuances of the music whether it be a khayal, thumari, or a devotional piece. An inborn genius  she shared the feeling of joy and happiness with music lovers. It is the aesthetics of her music  that moved the audience rather than the diction or the rhythm of the music. 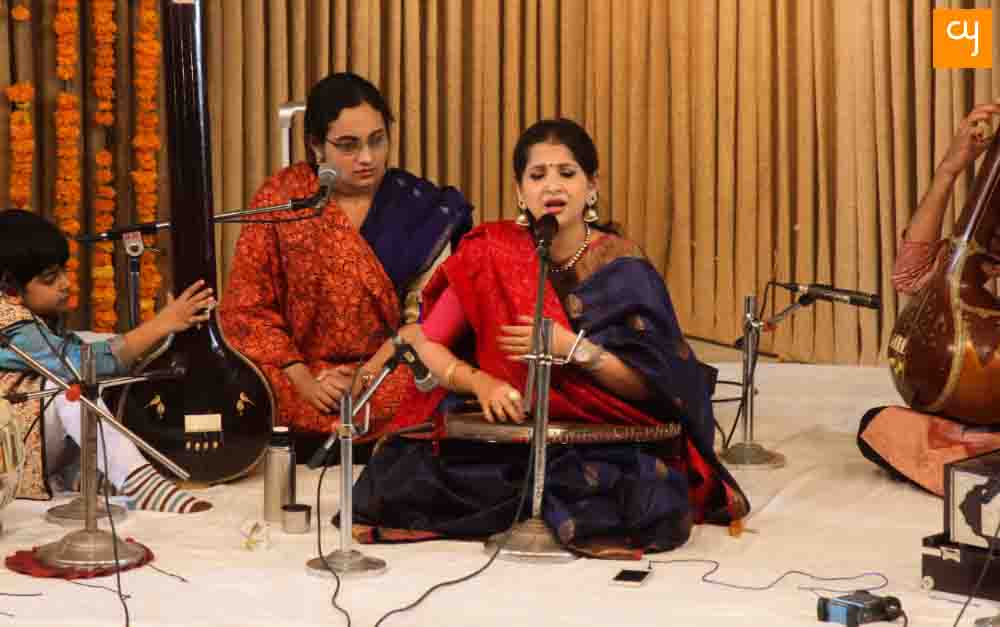 Kaushiki began the concert in raga jog. A very popular melody with the performers of classical music . This raaga is sung maintaining the structure of raaga tilang with the addition of phrases ‘ gas a, ga(komal)’. She presented  three compositions first in slow tempo, the second and third in medium and fast tempo. ‘Piharva birava’ was in slow tempo while the tarana in jhaptal and  ‘shubha din shubha ghadi in fast tempo’. Her vision of development in slow tempo was classical. Kaushiki was very graceful in executing the difficult  taan  phrases which flowed  like the silent  waters of a river and travelled the octaves with a speed of lighting. It was truly a flawless performance. She continued to regale the audience with a dadara in pahadi and concluded with  ‘yaad piyaki aaye’. Smt. Paromita Mukherji provided excellent  follow up on harmonium and Shri. Satyajeet Talvalkar accompanied on tabala 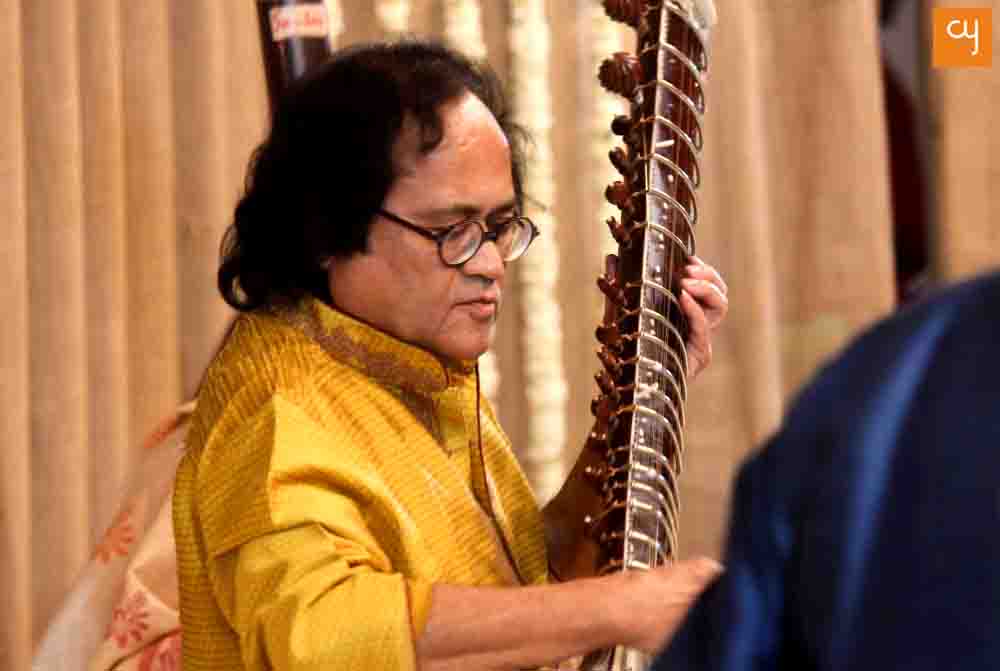 The sitar recital preceded  vocal rendition  Pt. Krishnamohan who gave the sitar recital is known  for  his innovative talents.  He has involved himself in doing research of the roots of the Indian raaga system. He is also working on the history of Rajasthani folk music. He rendered alap, jod and jhala in the raaga chandanikedar. Chandanikedar is one of the rare variety of kedar . Komal nishad is used along the dhaivat in the descending exposition of the raaga like  ‘dha ma ma, pa,pa,dha ni(komal)dhapa’. After playing two compositions in chandanikedar  he played a composition of patiyala gharana in the raaga shahana. He concluded with a beautiful composition in the raaga bhimpalasi. The exposition of the compositions were pleasing and serene in nature.. Shri. Himanshu Mahant gave excellent support on tabala..

Day 12 Personification of excellence in technique. 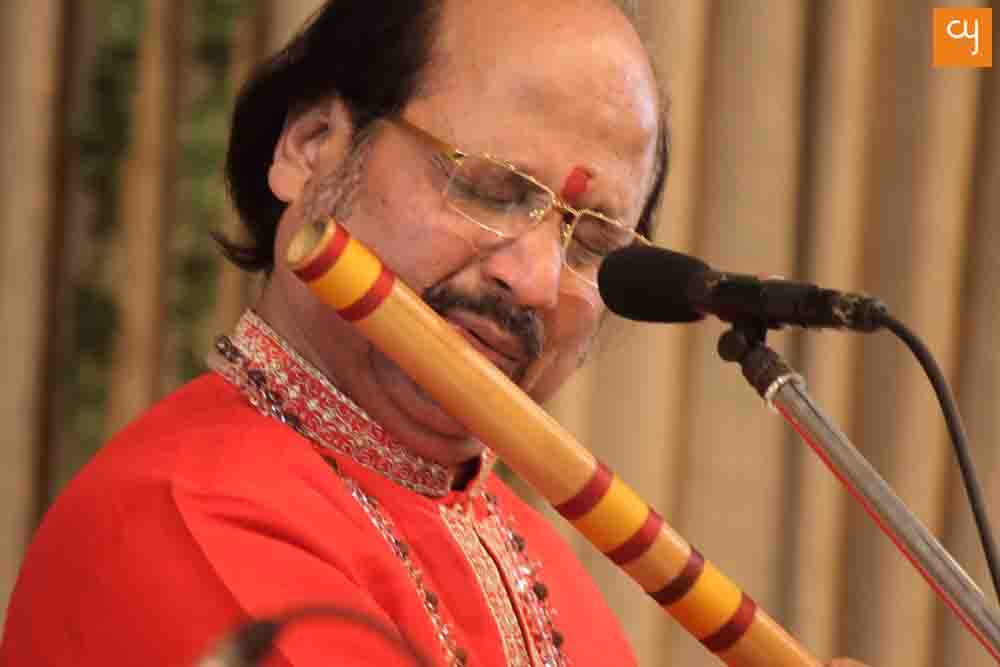 The main attraction of the 12th day of the music festival were a flute recital by Pt. Ronu Majumdar. After initial training from his father he was groomed by many musicians like  Pt. Vijay Raghavrao and Pt. Laxmanprasad Jaipurwale. He was finally trained in the senia mahir traditions by Pt. Ravishankar. In the words of Ronuji ’It takes a long time  to give a note various shades in different raga to get the feeling of bliss and to share with listeners’.

Raviji pointed out to Ronuji first to use  ‘andolan’ while improvising a particular note, for no flautist in Indian classical music uses this very art in music. After the late Pt. Pannalal Ghosh of the  mahiar gharana the ‘andolan’ technique is hardly used. This ‘andolan technique ‘ was exhibited in his rendition. He began with the raaga abhogi. His alap, jod jhala truly bear the stamp of mahiar gharana. Following the drupad traditions of the gharana he played compositions in taal dhamar of 14 beat cycle. He has excellent control on the blow of the breath. Ronu has a mature grasp on the swar vistar. He also has a wide collection of excellent taan phrases. Exhilarating presentation of rhythmic beat calculations pleased one and all. He concluded with raaga Bihag by playing two compositions one in ektaal and the other in teen taal. 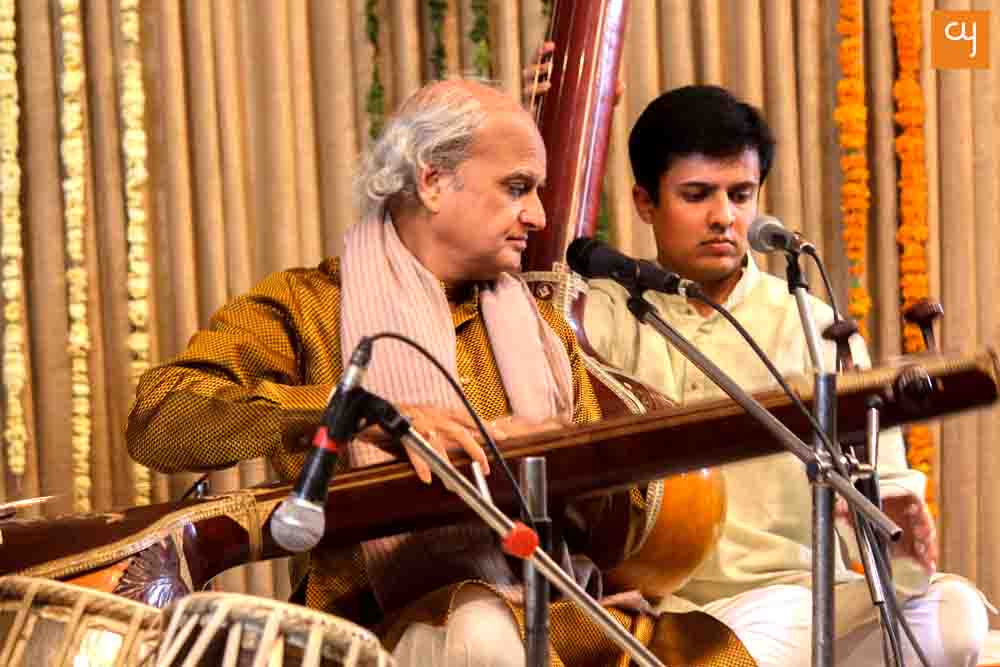 Pt. Kashalkar  the main vocalist of the day is a well known musician of the classical tradition. He delivers the authentic and aesthetic blend of Gwalior, agra and jaipur atrauli style of singing. There is pristine purity of classical idioms in his presentation of khayal music. Ulhasji’s melodious  way of badhat, the echoes of the gwalior funda and the sapat tans spoke of his ability of performing  music. He has mastered the Gwalior taan patterns having circular movements joining the different  sentences.

He began with two compositions in the raaga jogkauns. He presented compositions in ektaal and teental. He continued the programme presenting composition in paraj-kalingada a rare combination of  raag paraj and kalingada. He concluded with compositions in paraj and sohoni. Panditji’s renditions always bear stamp of learned and mature musician. He was accompanied on tabla by Ramdas Palsule and on harmonium by Milind Kulkarni.