Day 9 and 10 of Saptak are taking the festival to a grand closure !

Shri. Yashvant Purohit rocked the ninth day of Saptak music festival by performing an enthralling set on tabla. All the learned men of the art of percussion acclaimed the performance by raising their hand  in appreciation when the artist arrived at the first beat (sam) with a bang. Shri Yashwant Purohit is the Winner of Pt. Nandan Mehta Shastriya Taal Vadya Spardha Feb. 2016 and he lived up to his reputation. 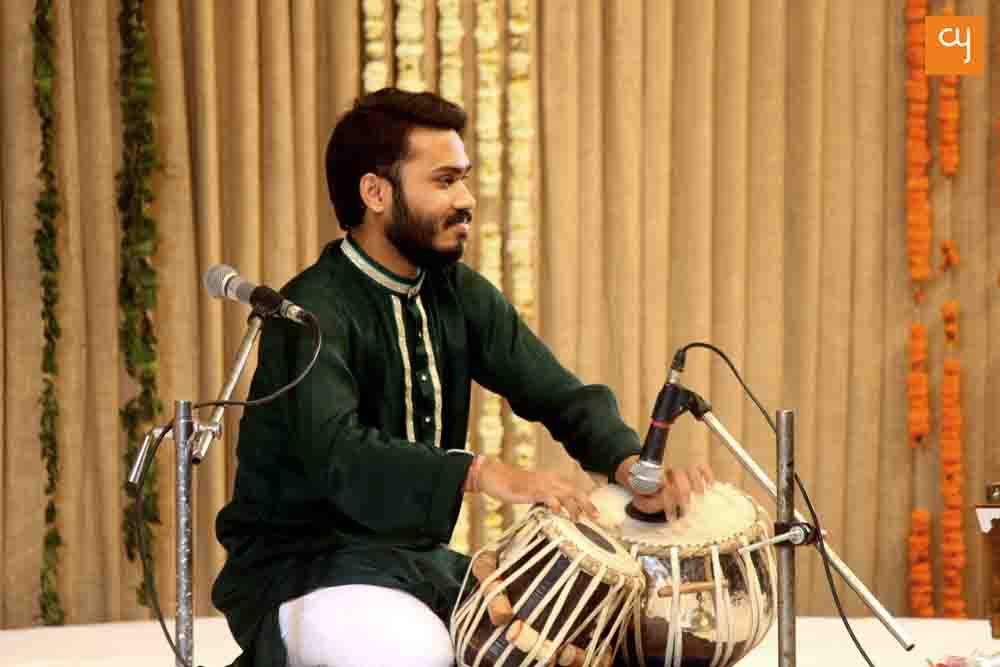 After having initial training from his father and guru Shri Rajendra Vaishnav he is under the training of guru Shri.Yogesh Samsi  who is a student of the famous  Ustad Allarakhakhan sahib of Punjab gharana. Yashvant began the recital with teen taal. Punjabi style of playing tabala is characterised by the exposition laddi, laggi. The students of this school have specialised training on the kinar and chat of the tabla. The artist presented peskar, gats, and chakradhars. He played compositions of  ustad Zakir Hussain khan.This was a pleasant and enjoyable  rendition. He was accompanied on harmonium by Shri.Nilay Salvi. 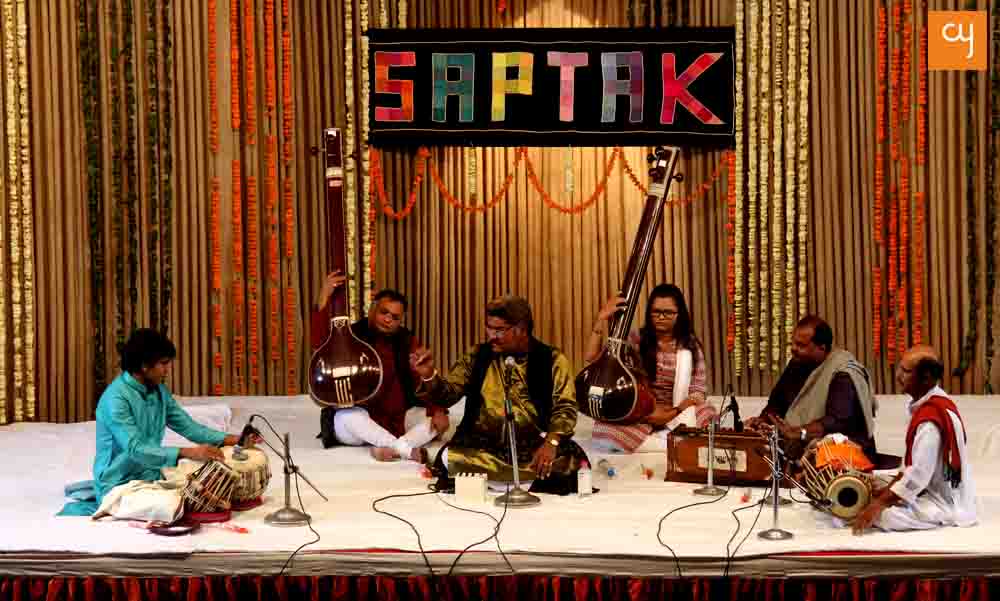 The tabla recital was followed by a vocal recital by Ustad Shaukat Hussein Khan of Agra School of music. The musicians of this school have a characteristic lower octave voice culture. He began the concert with  ‘nom tom alap’ in the raaga jansamohini a raaga similar with kalavati with the addition of rekhab in the descent. The ustad began with a medium tempo tempo Teen taal composition ‘mendiya lagavan de’. This was followed by taranas in medium and fast tempo Teen Taal. He exhibited layakari and taan phrases in the compositions. He was accompanied on tabla and pakhavaj by Shri.Hemant Joshi and Shri Hemant Bhatt respectively. Raju Gandharva gave harmonium support.

Amaan, Ayaan steal amdavadi’s hearts by a scintillating performance on Sarod. They belong to a family of musicians of great repute and are descendents of Senia Bangash Gharana. They began with a midnight melody malkauns. After an alap, jod the bangash brothers played compositions in slow tempo, middle tempo and fast tempo teen taal accompanied by Pt. Kumar Bose and Shri. Shubh Maharaj both belonging to famous Benaras gharana. The brothers concluded with brilliant exposition of jhala in fast tempo. 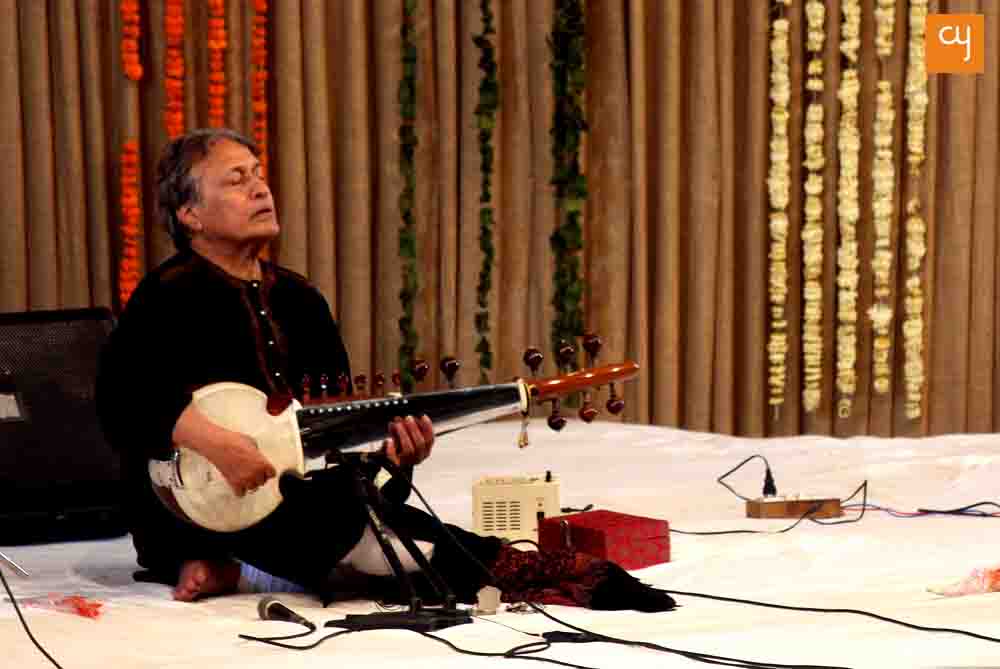 The star attraction of the 9th night of the Saptak festival was the Sarod recital by Ustad Amjad Ali Khan. It was an authentic traditional showcase of the Bangas school of sarod playing. He has innovated a unique style to execute the different taan phrases as distinct and clear on sarod as a vocalist would execute. He began the concert with an evening melody  with a very popular raaga known as khamaj. This raaga is more popular with the musicians who perform semi-classical music. He continued with another raaga  called tilang belonging to the khamaj family. Given a close look at the rendition one would not miss all the virtues – dedication,discipline and riyaz- that makes the musician an Ustad. He was accompanied on tabla by Pt. Kumar Bose and Shri. Shubh Maharaj.

Day 10 : Serenity takes over as Panditji’s breath flows through the flute.

Pt. Hariprasad Chaurasia with a Seniya grooming and a breath of a wrestler gave a flute recital befitting a maestro of bamboo reed. Hariprasad who performs with an ability to maintain the level of performance has an insight to communicate musical impressions to the dedicated audience. Pt. Chaurasia who once said that the flute was not just an instrument for him, it is his vocation and religion as well, was at his scintillating best. With his years of expertise Chaurasia soon had the audience mesmerised when he began with raaga marubihag. He rendered the  ‘swar vistar’ of the raaga in detail. The main notes that give credence to the raaga  are ‘ sa ma, ma, pa, ga,sag a ma pa ma pa (ma tivra), pa ,ma (tivra),ma,ga,ma,ga(ma tivra) re, sa ( with meed), re, sa ni(mandra)with (meed), Sa ma-ga wth (meed),pa ga re sa.’ The raga having sa, ma, or pa as main (vadi) notes give a serious nature (gambhir prakruti) to the melody. He rendered two compositions, first in nine beats cycle savari, and the second one in middle tempo teen taal . Whether it was alap or jod or the compositions in marubihag it was indeed the performance of a maestro, reflecting his years of dedication to music. It won’t be  an exaggeration to say that his flute drips with joy and happiness. He was accompanied on tabla by Shri Shubhankar Banerji. 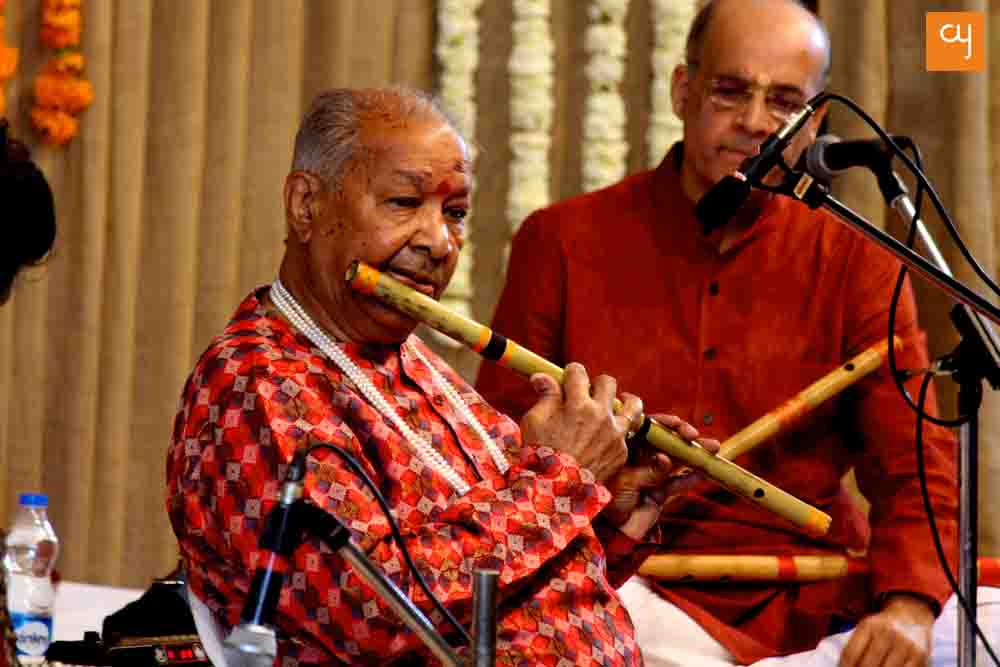 A vocal recital by Shri. Suman Ghosh preceded the flute rendition. He presented two compositions in raag bageshri. The first one in slow tempo Teentaal a famous composition ‘ kaun gata bhai’ and the second one in ektaal. He concluded with a composition in raaga charukeshi. He was accompanied on tabala by Shri. Hindole Majmudar and on harmonium by Shri. Sudhir Yardi.