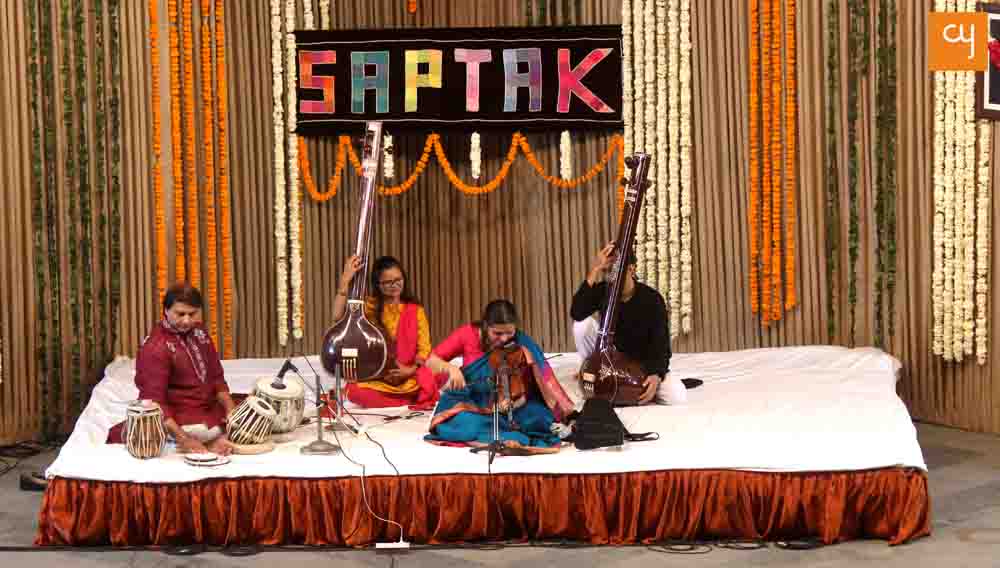 The second programme was a presentation of dhrupad music by the well-known musicians Gundecha brothers known as Umakant, Ramakant and Akhilesh Gundecha. Correct and proper production of voice is of paramount importance in dhrupad music. This style of music is pristine and masculine in the expression of music and mainly devotional in content. Taans and other embellishment are not used. The brothers gave a serene presentation of raga Malkauns. The sequence of alap, jod gamaks and compositions in chautal of 12 beats were rendered in true dhrupad traditions. 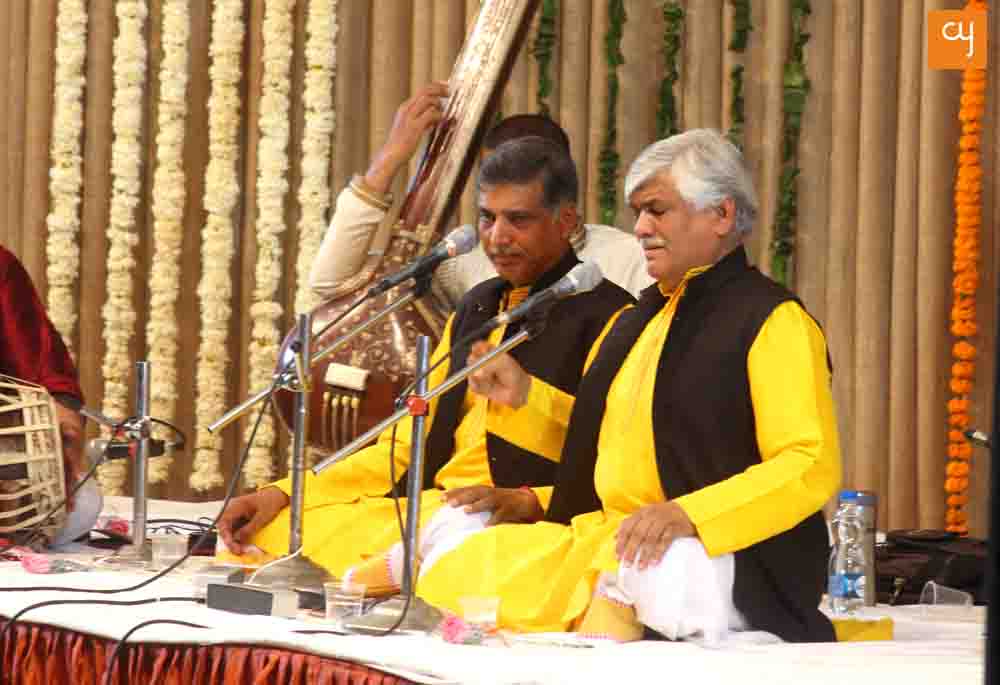 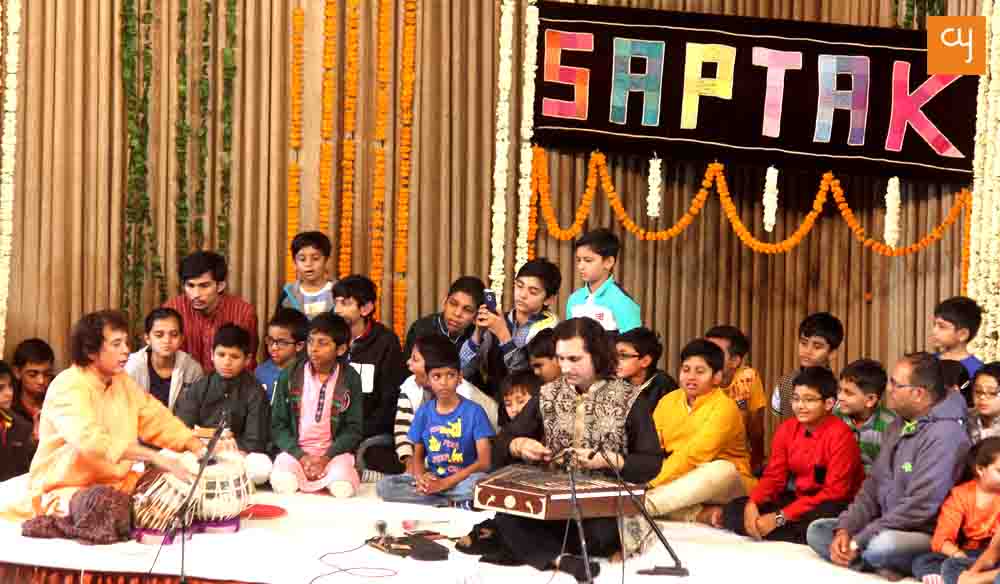 Shri. Rahul Sharma along with Ustad Zakir Hussain was the main attraction for the young crowd of the city. There is no better string instrument than santoor which is better suited for rhythmic progression and there is no better exponent of santoor than the Shivkumar Gharana and Rahul is the major contributor to the ghrana by his innovative inspiration. The artist began the concert with raaga  Kaunsikanada. He began with alap, jod jahala in the said raaga. After alap a process that puts a parameter on the rendition of a raaga the maestro played three compositions in rupak taal and teen taal . Zakir Hussain a global icon fulfilled the expectation of the huge gathering magnificently. The audience could not resist saying ‘Wah Ustad, Magic recreated.’

On the eight day of the Saptak music festival, there were four concerts namely a group singing by the students of Saptak, a kathak recital by Shri Maulik Shah and Smt. Ishira Parikh, sitar recital by Ustad Shahid Parvez khan and Pandit Jasraj. 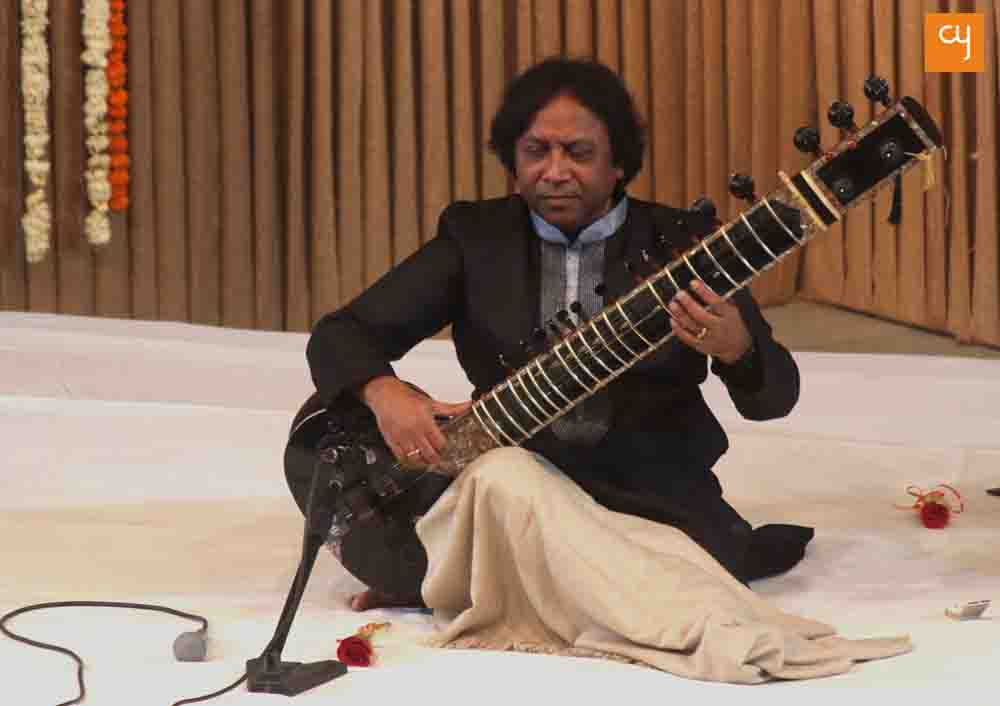 Ustad Shahid Parvez khan of Itava gharana began the sitar recital with a very pleasant melody of the khamaj family known as rageshri. He started with thought provoking alap, jod and jhala carving out the salient phrases of the raaga in a precise and pensive manner. The strokes of mijaraf were powerful, showing virtuosity while playing several notes in a single stroke. He presented focal tunes of the raaga displaying clear perception of the melody. Shahid played compositions in rupak taal consisting of seven beats and compositions in medium and fast tempo taan taal. The gharana is known for rendering the form of vocal music through the medium of sitar and the ustad has imbibed the important values of the style very well and weaves them to perfection. Execution of scintillating tans and various other gharana specialities of the taan couplets in various rhythms and tempo were superb. Shri. Gaurishankar accompaniment on tabala and was brilliant in executing the different taals. 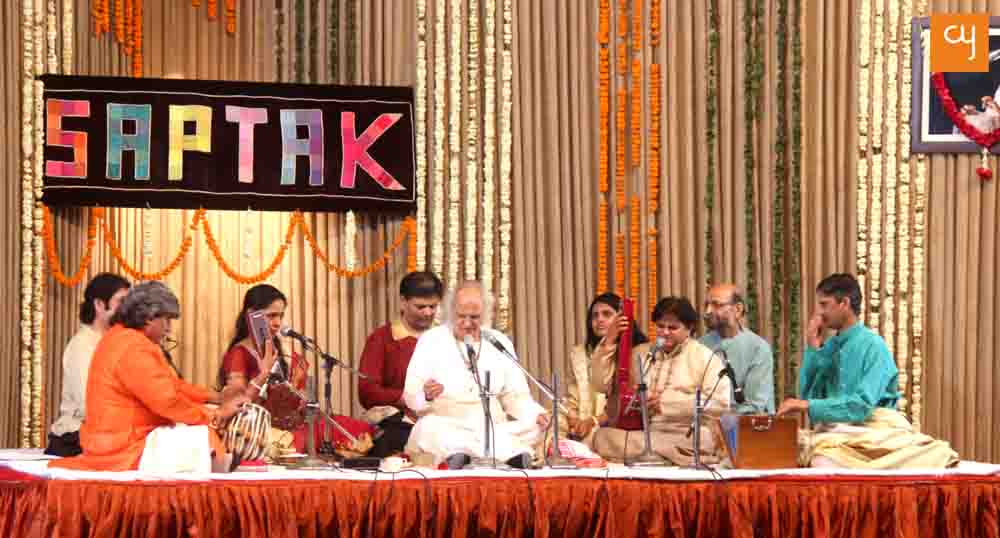 The devout worshipper of the divine powers of Indian goddesses Pt.Jasraj was the star attraction of the eight evening.His renditions are marked by his superb voice and clear diction. He stresses on the aesthetic aspect of music in his delineation of the raaga. His approach to music has always been devotional and spiritual.Chanting of Mangalam Bhagavan Vishnu creates a serene atmosphere. The enchanting gradually merges with the main composition. Panditji began the khayal music in raaga natanarayan. Dhavait is not sung in a clear emphasis during descent. And there is no nyasa of madhyam like they do in the exposition of raaga nata. The medium tempo  Teentaal composition began with the words nirankar narayan. He was accompanied on tabla by Shri.Ramkumar Mishra and on harmonium by Shri. Mukund Petkar