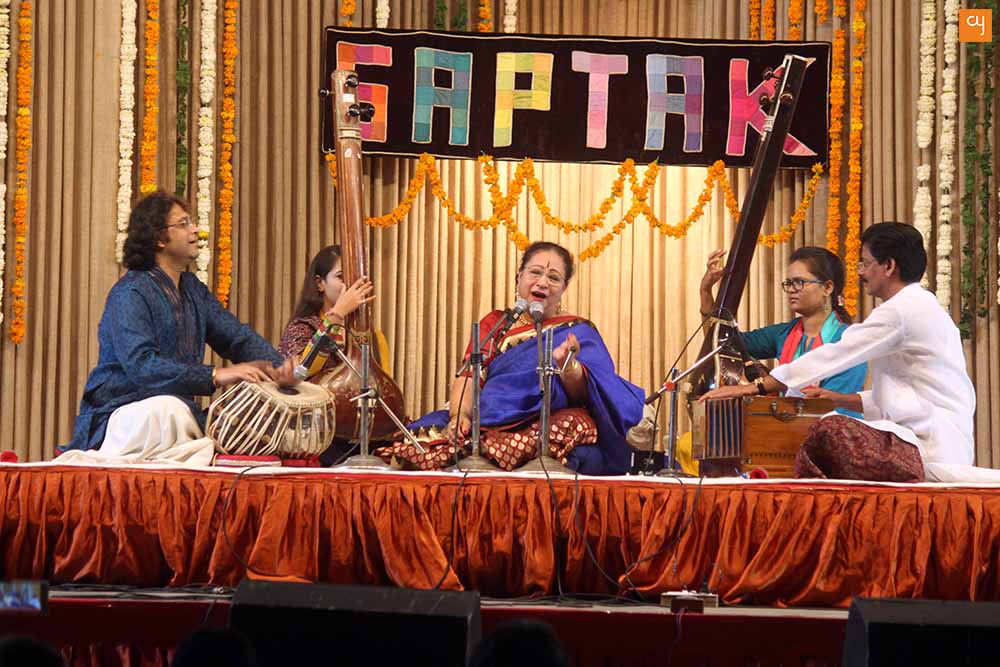 The Saptak Festival known as the longest music festival in India, this year is dedicated to the memory of Late Sangeet Markand Pt. Omkarnath Thakur. Saptak music festival 2017 has catapulted Ahmedabad into national league of classical music.

The first night had four performers. A Shehnai recital by Shri Bhaskar Nath, a Tabla solo by Sushri Rimpa Shiva, a flute recital by Shri.Rakesh Chaurasia and a vocal recital by Begum Parveen Sultana.

In keeping with the ancient tradition the festival started with ‘Mangal dhvani’ a shenai recital by Bhaskar Nath and party. Shri Bhaskar began with a composition in raga jog set to seven beats of Taal Rupak. This was followed by a dhoon encompassing several ragas including Pahadi and Bhairavi. Shri Arshad khan provided excellent percussion support.

The Shehnai recital was followed by a brilliant performance on Tabla by Rimpa Shiva who exhibited excellent skills. She is one of the few female Tabla players who were taught to play the Farukabad gharana style by her father Prof.Sapan Shiva. Ustad Karamatullakhan also trained her to play the ‘baj’ in an artistic way. She began the recital in slow tempo Teentaal, wherein she played gats and tukdas. The uthan was impressive. The tukdas were played and spoken with great clarity. The playing of ‘relas’ were a treat to hear. She concluded the recital with a ‘tihai’ in ‘drutlaya’. The programme was received by the audience with thunderous applause. Shri Nilaya Salvi provided able harmonium support.

Rakesh Chaurasia continues the legacy of Chaurasia gharana. He is one of the most accomplished disciples of Pt. Hariprasad Chaurasia. He is also a well-known composer. He began the concert with alap in raga Chandrakauns. This raga has a simple configuration- sa ga (komal) ma dha ni. It is ‘aaudav-aaudav’ in form. He presented the raga in two compositions. First one set to 9 beats and the second one in fast tempo Teentaal. The artist concluded the recital by playing a ‘dhoon’ in Pahadi and which the audience loved. Shri Fazal Qureshi gave great excellent percussion support both during the ‘alap’ in ‘drupad’ tradition portion on Pakhawaj and on Tabla on the regular part.

Begum Parveen Sultana was the last performer of the night. She began the concert in Raga Maru-bihag. There is no reference of this raga in ancient texts on classical music. It has been introduced by Ustad Alladiakhan of Jaipur Atrauli gharana. It is a misnomer as the form as the form of this raga is different from that of Bihag except that the notes ‘re’ and ‘dha’ in ascending are omitted or not prominently expressed. The main phrase of the raga is ‘sa ga ma pa ma pa,ma ga,re sa’  in ‘meed’. She presented two compositions in the raga. The ‘kaise rahu sagan bin‘ was an excellent presentation. She concluded with the well known composition in Bhairavi  ‘ Dayani Bhavani’, which was presented in the most lyrical way.