Notre Dame de Paris: will it rise like the phoenix? 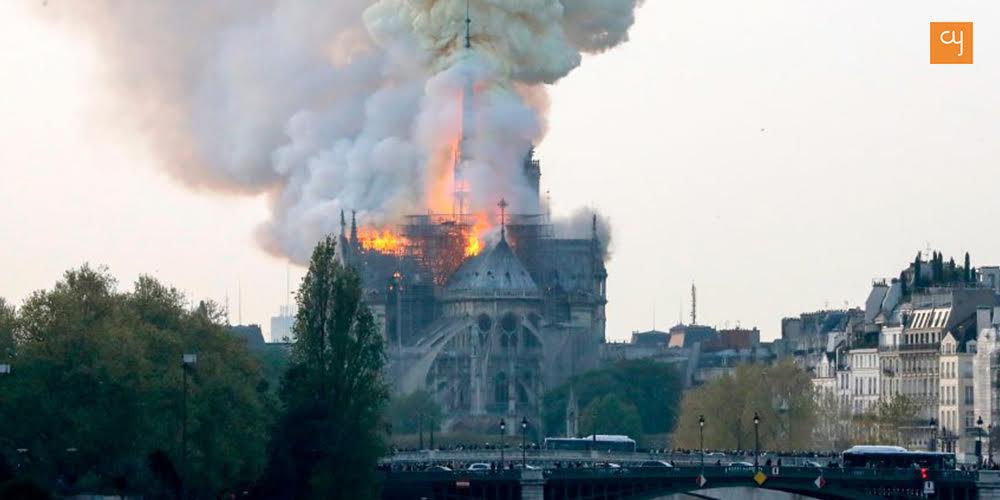 The Crown of Thorns worn by Jesus during the crucifixion, colourful stained rose windows, one of the world’s largest organs, and various other relics, paintings and sculptures were present in the Notre Dame de Paris during the fire. Do they survive?

Paris. April 15, 2019. A few minutes before 7 PM. The world gasped as a ghastly fire broke out at the more than 850-year-old medieval work of Gothic architecture, Notre Dame Cathedral.

The dark plume of smoke that rose for around 15 incessant hours in the serene skies of Paris has left people mourning across the globe. The blaze was sparked during an ongoing renovation project, during the Holy Week. The devastation goes down in history as one of the world’s biggest cultural tragedies. The Notre Dame cathedral is one of Paris’ most visited destinations with around 14 million visitors annually.

Notre Dame Cathedral is religiously, culturally and politically emblematic for many across the globe. It has been witness to some of the most historic events such as the crowning of Henry VI of England in 1431 and the crowning of Napoleon in 1804.

While the fire has destroyed the iconic 90-metre high spire completely, the historically and artistically valued Catholic relics, artefacts, paintings, sculptures, pipe organs and stained glass rose windows are also at risk. A few of the artworks were saved by emergency workers who formed a human chain, and they have since been transferred to the Louvre Museum, but a lot of them are still unreported and may have been charred during the blaze.

It has been nothing short of a miracle that statues of the Twelve Apostles and four New Testament evangelists were removed for restoration just days before the fire.

Here is a look at the objet d’art that were present in the premises before the fire broke out.

Standing as a symbol of the divine pouring in, the stained rose windows in the cathedral have captured the imagination of generations for ages. The south-facing circular rose window is considered to be among the greatest masterpieces. Created in 1260 AD, after numerous restoration projects, damage restructuring and the fire of 1830, the tinted glass of today is a replacement to the actual art piece. Fortunately, according to reports, the glass work has been saved from getting charred completely.

The huge paintings called 50 “Mays” of Notre Dame, created in honour of the Virgin Mary, were commissioned by Parisian Goldsmiths’ Society on a specific month from 1630 to 1707. Here are the paintings that were exhibited in the collection when the fire began. Each name is a translation of the original French title.

Among the statues and structures inside the cathedral is the famous Our Lady of Paris, which is a Madonna with a child. Rest of the 36 representations include:

A musical marvel built in 1869, The Great Organ, one of the largest organs in the world, consists of five keyboards and around 8000 pipes. This was last renovated in 1992. The man-made wonder is accompanied by two other significantly smaller organs. According to a report by The Week, “There have been conflicting reports about the organ’s ‘well-being’ after the fire.”However, the rumours were quickly put to rest when the Paris deputy mayor Emmanuel Gregoire confirmed the organ’s quick rescue as soon as the fire broke out.

Believed to have been placed the head of Jesus Christ during his crucifixion, the crown is said to have been bought by King Louis IX of France in 1239. It is considered to be the most sacred relic of Notre-Dame. Though the deputy mayor Emmanuel Gregoire confirmed the crown’s rescue, reports on other significant relics, like a nail and a fragment of the cross that is supposed to have been part of Jesus’ crucifixion, are still missing.

Notre-Dame Cathedral had ten bells, of which the oldest is Emmanuel. Weighing 13 tonnes, it is one of the structure’s original bells. In the1831 novel, The Hunch back of Notre Dame by Victor Hugo, the character Quasimodo is a bell-ringer by profession. The fate of the bells at the cathedral is still not clear.

Various world leaders and celebrities across the globe are mourning the loss on social media.

This is certainly a huge loss to human civilisation. But we hope that this dark tunnel gives way to a bright ray of light. As the world unites to give the cathedral a new lease of life, we are hoping for Notre Dame to rise from its ashes. For isn’t this what we humans are all about? About resurrecting ourselves every single time?

With inputs from Associated Press