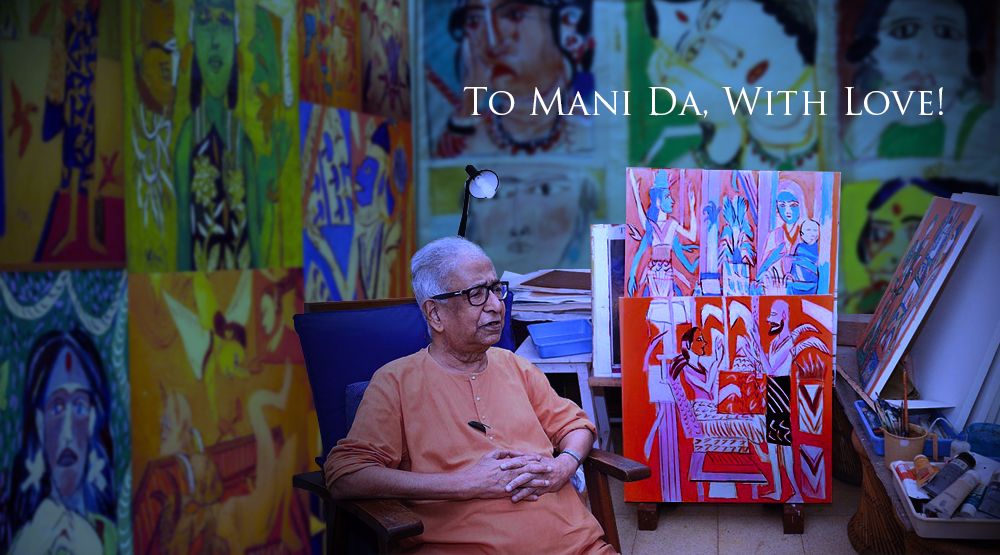 To Mani Da, With Love! Chapter 2 : The Artist

KG often spoke of his learning from “Aban patua” (Abanindranath Tagore); “He taught me,” said KG, “to write an image, to picture a story.” This is many ways connects to the almost and unintentionally autobiographical ‘Wednesday Outing’. Here the protagonist Ganga speaks: “Yet between the rocks and sea I laugh and live/ Rubbing the ribs of earth, holding the sky/ In the tiny mirrors of my glassy waves./ And in this passage I have many histories,/ That grow and multiply with the passing years.” This Soliloquy articulately and expressively sums up his formidable life. Artist, teacher, storyteller, poet, cultural organiser, textile designer, theorist of art and culture, K.G. Subramanyan (1924-2016) touched the lives of countless students, viewers and readers. He was in many ways an heir to the Tagores, who refused to be controlled by pre-determined boundaries of artistic form and genre, and who both contributed to and drew sustenance from print modernity.

A maker of sly, playful, erotically charged pictorial fictions, Subramanyan was a seasoned and fine observer of society: In looking at the work of art, he did not miss the critical associations that connect creativity, labour, economic consumption and aesthetic delight. The sardonic guru figure who taught by example, indirect notes and obscure clues, both at Santiniketan and in Baroda. He ignited in them the same insatiable curiosity for the world’s unpredictable manifestations that had inspired his own journey. His multi-directional practice accepted media and materials as varied as the word, paper, gouache, terracotta, cement, and textile — was sustained by a deep, intense and engaged practice of reading. KG truly and organically extended his subjectivity in a diversity of directions.

Banned for a three-year period from resuming his studies in Madras, owing to a stint in the Allipuram Camp Prison, Bellary, where he had served a six-month term for picketing his college in Madras during the demonstrations that followed Mahatma Gandhi’s “Quit India” call, he was summoned to Santiniketan by Nandalal Bose in 1944. He took with him a sensibility that had been shaped early on by the journals he read at the public library in Mahé,  the French territory to which his family had moved from Palakkad, a town at the Kerala-Tamil Nadu border. While his contemporaries in British India were still paddling in the pools of academic realism, KG was breasting the currents of Parisian modernism, grappling with the visual and conceptual revolutions of Cubism, Surrealism, and Dada in its various avatars.

Mani Da drew upon motifs culled from myth and contemporary culture to depict a complex reflection of conflict where even decorative motifs acquire theatricality and violence. According to him, all cultures have devised signs, symbols and rituals to demonstrate the underlying unity of mankind. With time, however, these devices get uprooted from their meaning and are co-opted into sectarian ideologies. These he said become hollow relics of the past creating distance instead of unity, and thus bringing the world to war said Mani Da of one of his largest works ‘War of the Relics’ exhibited at the Kochi Muziris Biennale in 2014.

“When I wake up in the morning and see the sunlight streaming through my window, I want to grab this day and make the best of it,” and he did, for each day and every moment of his life. He had the unique ability to dive into the deeper cultural meanings of traditional art forms so as to create idioms that spoke to the contemporary context – witty and revolutionary, suspended between the real and the imagined. Seeing art and craft as part of the same continuum. Remarking that everything had a life span of its own Mani Da was not bothered in the least that he was creating something that would not last forever. But he will, forever and ever in the annals of Indian History, Art History and the innumerable people whose lives he has touched in many ways.