The Indian Connection in San Francisco 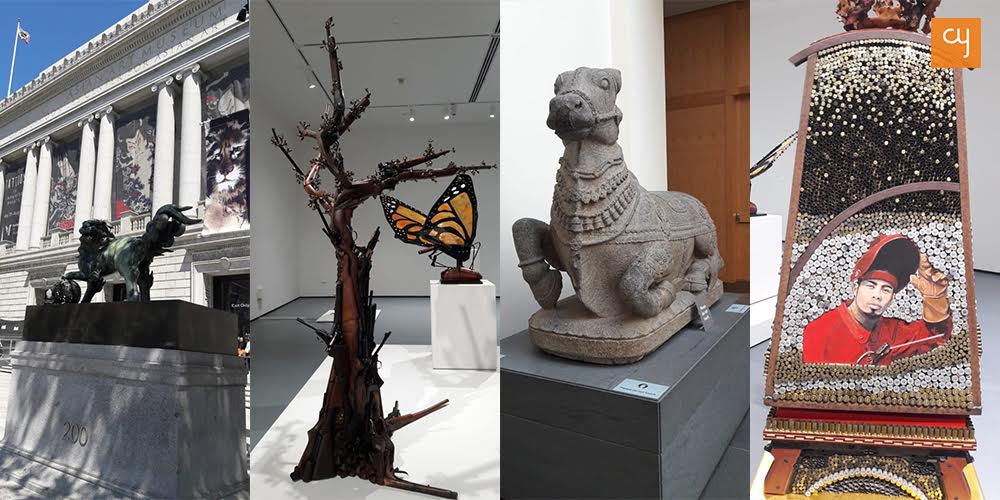 It was the eve of the Indian Independence Day and I was on this season’s first visit to San Francisco. And unwittingly I discovered these two icons of the Indian mythology and the Indian freedom struggle at the first and last spots I visited within the four hours I spent in the iconic city on the day.

I made it to the Museum of Asian Art, the first thing of the Day and what I found as the prominently exhibited permanent art piece here was a sculpture of The Nandy, the well-known and much reverred Vahan of Lord Shiva. Described as from 1400-1500 AD Tamilnadu, this piece apparently was brought here and eventually gifted to the museum-cum-art gallery by a certain art foundation. The artist’s name, unfortunately, is not known and therefore not mentioned.

The second I discovered was a Shriram Learning Resource Centre, alongside in the Asian Art Museum. The docent at the Reception – a well-spoken charming young lady – was able to only confirm that rooms like this are named after foundations that support the Museum with substantial one-time contributions. So I assume the Indian industrial family that runs the Shriram Centre for Arts in Delhi may have reached out this far to keep the name alive beyond the Indian borders in a Museum that stands truly tall and magnificently for Asia! It’s location just across the main City Square and opposite the massive City Hall makes it a vantage point even as one sensed it’s predominant bias towards things Japanese.

The other connection that I discovered was not very surprising and yet it appeared before me rather unexpectedly. A statue of Gandhi tucked away in the backyard of the famous and fervently brisk Ferry Building on the San Francisco seafront! A collaboration between the Metropolitan council of the city and The Gandhi Memorial International Foundation, this work by American sculptor duo Zlatkov Pounov and Steven Lowe, this statue was commemorated to the City of San Francisco on Oct 3, 1988 and it stands frozen in the familiar gait of Gandhi who is seen apace with his Dandi Yatra Lathi in his hands!!

This Ferry Building that hosts the Gandhi statue is a hot spot for both the tourists and daily commuters alike and even if the statue is not in the City Square, some distance away – this must still be seen in good light.

Yet another connection with Gandhi and India surfaced in an art installation displayed at the Yerba Buna Centre for Arts which was part of the ongoing exhibition “Art of Peace” in one of their galleries. Made out of a decommissioned Smith & Wesson revolver, this work is interestingly titled ‘Ahimsa 2018.’ Crafted by Constantine Zlatev of San Francisco, on activation with a button, the installation runs a slide show of six well-known personalities of the world who worked with non-violent means, two of whom were even assassinated. Gandhi’s was the first picture in this slide show followed by that of Martin Luther King Jr, both of whom were shot dead, while others include German-Canadian scientist Ursula Franklin, who helped stop with her researched findings, the atmospheric testing of nuclear weapons; and some others like Desmond Doss, the American corporal and combat medic.

This exhibition with a number of other exhibits also made out of gun buts, barrels and bullet shells started on July 23 and soon coincided with at least three more incidents of shootings in public places in US. This did send shockwaves once more, but yet not producing the kind of atmosphere that would force a law the incidence of gun violence requires for it to be curbed.