In modern Indian theatre, Ebrahim Alkazi stands like a colossus 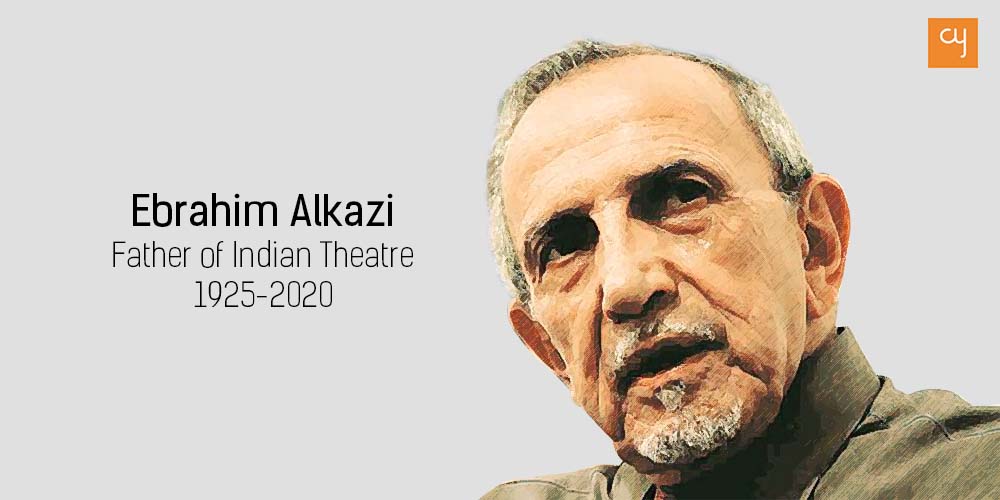 Ebrahim Alkazi (1925-2020), a theatre genius who can truly be called a legend in his field, passed away on August 5, at the age of 94. He shaped careers of a galaxy of actors who are celebrities of India in theatre and cinema. Born and brought up in India in a Saudi Arabian family in an environment of books and learning in Saudi Arabia, later a graduate of the Royal Academy of Dramatic Arts in London, he became the director of the National School of Drama (Delhi) in 1962.  During his tenure (1962-77), he became synonymous with NSD and Indian Drama – from its traditional form to the post-independence modern drama – in performance found a place of eminence in the burgeoning World Drama.

You need to meet some of the NSD graduates spread all over India and to have seen some of his productions – among them Dharmaveer Bharati’s Andha Yug, Girish Karnad’s Tughlaq and Mohan Rakesh’s Ashadh ka Ek Din, all distinctively different in form, language and milieu, to realize how Alkazi had raised Indian drama to an art form. Through these productions, his method of producing them, teaching and workshops, he redefined the concept of theatre, which earlier largely was a crude attempt at entertainment with theatricality.

Alkazi brought to theatre, his students proudly assert, a sense of professionalism. He emphasized in his teaching and demonstrated through his productions an attitude of dedication with pre-production research, the need for attention to detail in all aspects that contribute to the impact of a performance – set design, lights, music and sounds, costume design, for example.  In his view, they were no peripheral adornments but parts of the production integrally contributing to its meaning.

He was known to overhaul young theatre aspirants’ thinking. He had them understand the use of space in sync with body and speech and create a visual interpretation of a play intellectually and imaginatively stimulating to the viewer. In his open-air performances like Tughlaq at the Red Fort, moving away from the traditional proscenium theatre, he thrillingly created the right milieu. He was at ease in his productions of Greek, Shakespearean, Japanese and French plays as much as contemporary Indian plays translated into Hindi.

I conclude with a few lines from my review of Tughlaq (March 1985) :

“Save me O God!” Tughlaq (Manohar Singh) in his black robe prays. ‘Lift me out of this mire.” He is on his knees, his face skyward. The stage, dimly lit towards the back, with two archways, one right on it (left centre), another on a raised platform (right centre) with two flights of steps leading to it, which used to swarm with people in the earlier scenes, is now deserted.

Alkazi’s distinguished direction is reflected in the perspective of life in which all its characters are projected, an impression of authenticity about the royal culture depicted with attention to detail, the chess-like moves by the royal characters sweeping in and out, the choreography of crowd and court scenes, the economy of action, the psychological bearings of the character of the protagonist, the perfect costumes, the appropriate sound effects, at times only faintly audible (those nocturnal cries of dogs and wolves!) and in getting the audience to sympathize with a historical character labelled as a madcap and held responsible for many a killing.”