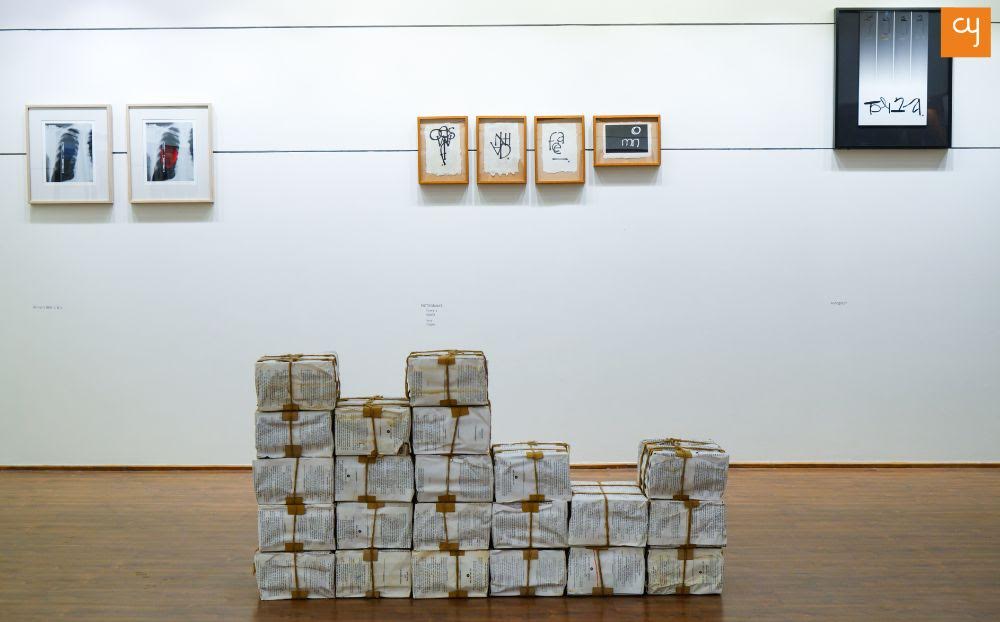 An artist, a filmmaker, an author and a philosopher – Delhi based Ashok Ahuja combines the seemingly unconnected elements – text, Mahatma’s philosophy and space to construct an engaging visual experience. The multi-disciplinary artists 8th solo show opens at Satya Art Gallery in Ahmedabad.

I am supposed to meet Ashok Ahuja in the Satya Art Gallery at Navajivan Trust. I enter the gallery and find him busy with the setup. Dressed in grey cargo pants and a black Henley t-shirt folded at the cuffs, he stands pensively over a large piece of vinyl spread on the floor. “I think the fonts are a little big,” he thinks out loud, talking to no one in particular. I wait for an opportunity to introduce myself and start a conversation. But before I know it, someone from the gallery introduces me to him and my reason for being there. He smiles and firmly shakes my hand. “I am sorry but I really want to take care of this first. Please bear with me for some time,” he tells me politely. 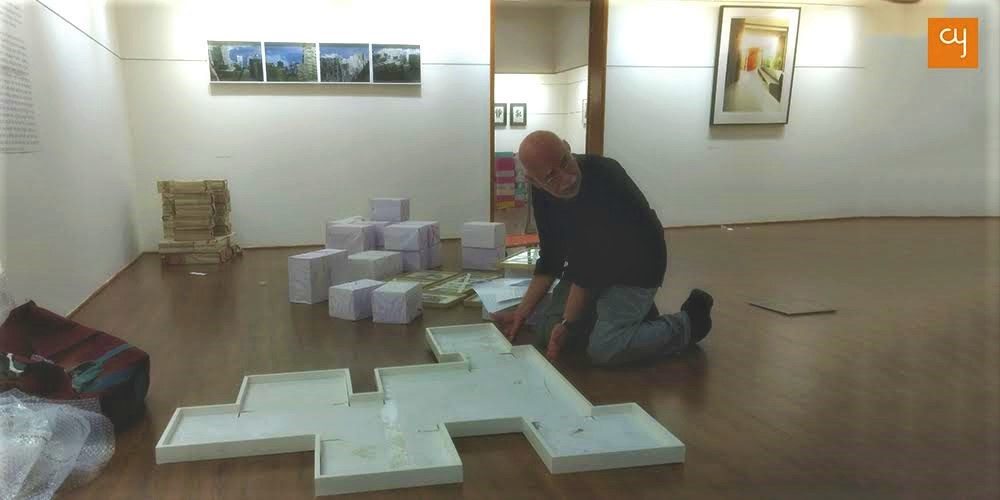 The whole place is buzzing, given that this exhibit is the acclaimed artist’s first one in our city and it opens on the 100th anniversary of the Navajivan newsletter started by Mahatma Gandhi in 1919.

The exhibition is still being set up but Mr. Ahuja takes time out and calls me. “Come with me,” he says and starts walking towards the main entrance of the Navajivan trust office. “The exhibition will start from here. I want people to come in from here and see these printing presses and these typewriters belonging to Mahadev Desai. From here, they will enter this section,” he said, entering into the inner room of the gallery, which one finds if one enters from the Karma cafe side. 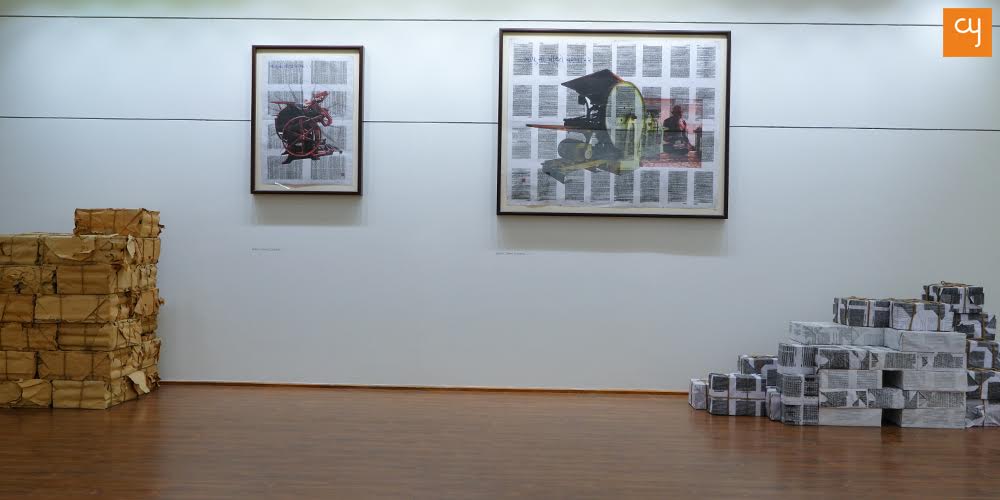 He walks me through each piece in the exhibit and instead of explaining his work, he asks me questions which nudge me towards understanding it myself. Describing the pieces would mean depriving you, the readers, of the complete experience and the joy of understanding it, hence I won’t do it. But I will recommend spending time with each piece so it can reveal its message to you.

“The same exhibition would have happened last year, but the dates didn’t work out. It is sheer luck and happy coincidence that it’s happening now on the 100th anniversary of the [historic] newsletter,” he adds. He then excuses himself so he could get back to work.

Ahuja’s oeuvre is varied and it tells us about his multidisciplinary approach. Trained in Film Direction at the Film and Television institute of India  he has written, produced and directed the national and international award-winning feature films namely ‘Aadharshila’ and ‘Vasundhara’. Eventually his keenness to work with space and dimension led him to art. He is among the early ones to work in Digital Art medium in India. His work has been showcased across the globe and is widely appreciated for the alternative realities it tries to depict. Some of his prominent shows include the Japan Foundation in New Delhi [2017]; The Fine Art Company, Mumbai [2009]; also, with Nature Morte and IIC, New Delhi [2004].

And his body of work goes further beyond. He has authored a book titled ‘The Third Race’ that was published back in 2004. He has published several papers that dealt primarily with language and its role in the formation of identities. All of this experiences manifest in his art. In the show Navajivan Nagar he uses seemingly unconnected elements, texts, Mahatma’s philosophy and space to construct an engaging visual experience. 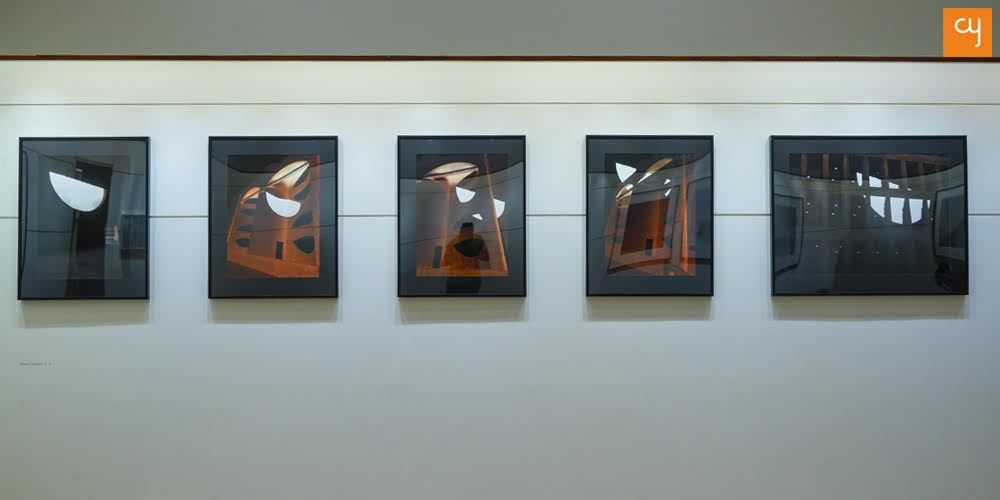 Each photograph, each frame and each word of the text is carefully chosen by the artist with a lot of thought behind them. The artwork seemed abstract to me initially, but slowly I noticed how it carried the beauty of simplicity, which only revealed itself with time. The varied elements connect through the string of Mr. Ahuja’s concept which is to express “the magic of texts, the mystical nature of writing and a dream of a new world in the context of Bapu’s thought and his life” as he put it.

The exhibition opens for viewing on 7th September, 2019 and will continue till 29th September, 2019. It is highly recommended that you experience this exhibit as soon as you can because it will be more than worth it.