The Year in Cinema: Your bucket list for Christmas Watches! 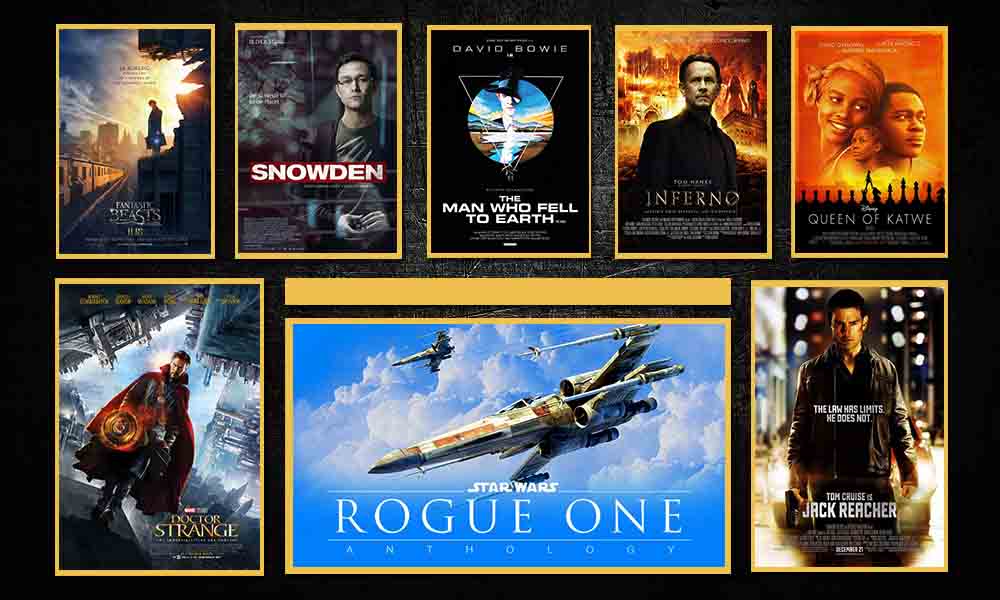 The year 2016 has been a productive one for impressive movies. Some of the better ones came in the last quarter of the year. Sequels and prequels are everywhere among the likely blockbusters.

Creative Yatra recommends the following movies you should probably put on your calenders for the holiday weekend:

The Man Who Fell to Earth

The technical clean-up of the Nicholas Roeg film was a process that commenced before its star David Bowie’s death this year and it comes on the 40th anniversary of the cult classic. It will be in selected cinemas, along with a deluxe Blu-Ray and DVD. British-accented stars have often ended up playing baddies or aliens, and Bowie fitted the role perfectly – he was strange, beautiful, and unworldly. The movie has dated charmingly, and of course influenced a lot of Bowie’s other work around the same time – the covers of “Station to Station,” “Low” and much more.

Director Oliver Stone is back with another Biopic (After “The Doors,” “JFK,” “W.” and “Nixon”). Edward Snowden, who leaked US classified information and later sought asylum in Russia forms the protagonist. Joseph Gordon-Levitt, who is said to have essayed Snowden to perfection with the mannerisms of the controversial. Agree with that thesis or not, it will be thought-provoking stuff.

The Queen of Katwe

Based on the real life story of a Ugandan chess prodigy who has to rise above extreme poverty as well as her opponents, this movie is already being touted as a winner. This is no independent low-budget production but a William Wheeler screenplay backed by Disney. LupitaNyong’o, the Oscar-winning actress plays the mother of chess star PhionaMutesi (portrayed by MadinaNalwanga).

Based on Dan Brown’s novel, this follows “The Da Vinci Code” and “Angels & Demons.” Tom Hanks is back as Harvard teacher Robert Langdon, the role he played in the earlier movies of 2006 and 2009. This time around we are talking intricate codes– Dante’s “Inferno” and Botticelli’s “Map of Hell.” The professor just has to decipher it all to prevent the collapse of civilization, something not too hard for a linguist and symbolist like himself. However he finds himself catapulted into action sequences, which may strain credibility but are certainly thrilling.

Novelist Lee Child has written a string of books about the danger-seeking, crime-solving Reacher and the first movie based on his paperbacks was positively reviewed.We have been here before, and so has Jack Reacher, played by Tom Cruise. Mission Impossible? Ahem! Ahem! Only time will tell.

Superheroes may be here to save the world. And Marvel and Walt Disney are joining forces. The computer graphics are collapsing skyscrapers and brave new worlds. And Benedict Cumberbatch is playing the lead. And all of that together is Doctor Strange – one of the most awaited films of the year. Joined by Rachel McAdams, ChiwetelEjiofor andTildaSwinton, who is not betting on this one?

Fantastic Beasts and Where to Find Them

The “Harry Potter and the Cursed Child” script and stage play, set 19 years after “Deathly Hallows,” are now joined by another spin-off. This is a prequel, set in 1926, about American wizard Newt Scamander (Essayed by the Oscar Award winning Eddie Redmayne). The Potter industry is growing, as if by magic, with two more films planned and a video game for those wanting to track down the monsters. No one is complaining!

Rogue One: A Star Wars Story

Felicity Jones stars as the latest Rebel Alliance operator with a mission and if you are a “Star Wars” enthusiast, you will almost certainly want to see more of the characters sketched in for another Galactic War. Walt Disney plans to leave no stones unturned.

Autumn-Winter Movies Watch List / Doctor Strange / Fantastic Beasts and Where to Find Them / Inferno / Jack Reacher: Never Go Back / Rogue One: A Star Wars Story / Snowden / The Man Who Fell to Earth / The Queen of Katwe