To Sir, With Love: A Tribute to Jeram Patel the Teacher

The artist’s teachings come full circle, as his students pay tribute to the man through their own work and inspirations at Baroda’s Faculty of Fine Arts.

It was a weary Tuesday afternoon at a high-street art gallery in Mumbai. It was the last day of the exhibition and the atmosphere was quite dull. The show was well received by the art community and collectors alike. The organisers were happy with the sales. After all, thirty percent sell out in this market was nothing short of a miracle. It was only minutes to the end of the exhibition when in came a man in his late 30s. He took a swift look at the works and approached the artist, “I see that quite a few of the works are still available for acquisition. I will make you an offer. If you tell me what these works mean, then I will purchase them all right now,” he said, flipping open his chequebook (we can’t talk about cash transactions anymore). The sparkle in the gallerist’s eyes was as that of a young child looking at a piece of the most sumptuous chocolate cake! The artist, seated, barely moving or even looking at the man, whispered, “Young man you shouldn’t buy my work if you don’t understand what it is about.” It was such dedication to his work that contributed to what was a turning point in the Indian Art scene in the late 1950’s and 60’s, with the artist formulating a new visual identity and method of abstraction.

Born at Sojitra in Gujarat’s Kaira district in 1930, Jeram Patel studied drawing and painting at Sir JJ School of Art in Mumbai between 1950 and ’55. He further studied typography and publicity design at Central School of Arts and Craft, London, for two years. Patel initiated one of the greatest changes in Indian art – alongside artists like NS Bendre, Jagdish Swaminathan and Sankho Chowdhuri, who set up the Baroda School of Art – by co-founding the short-lived artists’ collective Group 1890. It was Patel’s tenacious exploration of the negative image, which signalled in a new direction for Indian Abstraction in the group’s exhibition in 1963. This exploration is quite deconstructive and purgatory as it more often than not, reveals the truth, be it in terms of materiality and/or the state of being. His work is in constant oscillation between the prurient and the macabre. A similar process is witnessed in the works of close associate and abstractionist, Nasreen Mohamedi. Jeram Patel’s works have been extensively exhibited in the international art arena, of which he represented India at the 1963 Sao Paolo and Tokyo Biennale. He was also a part of the 1980 Third World Biennale at Baghdad and 1982 Festival of India in London.

Patel’s contribution to the furthering of Indian Art is discussed at length in the discourses of Art History. However, one of his most important contributions – as a pedagogue – has but received only passing mentions. The exhibition ‘A Tribute to Jeram Patel’, organised at the Faculty of Fine Arts on 19th January, attempts to position itself in this vacant space. It was initiated by Malti Gaekwad and Anil Relia, both students of Patel from the ’78 batch, in commemoration of Jeram Patel’s 1st death anniversary. The participants, hailing from the batch of 1978, mostly from the Applied Arts background, have at large showcased works, which respond to their interaction with Patel. Gaekwad, who is currently teaching in the Applied Arts department in the faculty, recalled Patel’s need for finesse, attention to detail and push towards tenacity – “We were apprehensive of showing him our work. If he did not like it, he would simple tear it or throw it out. He always wanted us to be more discerning and tenacious. His attention to detail was remarkable.” Relia commented, “We were petrified of him as a teacher. He was a strict disciplinarian and expected nothing less than a 100% from us. In hindsight we are happy that he pushed us to the extent he did.” The common response from all his students was one of fear towards Jeram Patel, the teacher. In fact, they had also written a poem on this,

Nevertheless, each one pointed to his warm and welcoming nature outside the classroom. 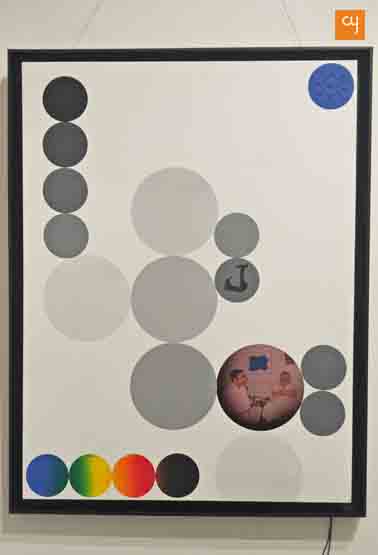 Most of the works in the exhibition have been done specifically for the show. One of the most frequent elements, the circle, which was the first class exercise under Patel, seems to have had a significant impact on the individual practices of these artists. The circle, in a more philosophical context, held underlying meanings in Patel’s personal practice as well. Anil Relia’s work uses the circle as a metaphor for the circle of life. The work displays his last photograph with Patel. It shows Patel’s final work done in blue in the background and has been treated with heat sensitive pigments, which lend it an appearing and disappearing act. Ravindra Kumar Vyas’s work in black and white, with flattened applications and sharp lines, expresses his connection with Patel’s hospital series. The work also hints at stories of personal encounters with the Maestro. Omprakash Jadhav’s set of three portraits are reminiscent of Patel’s demeanour. A transcendental experientialism comes across in his works. Gaekwad has displayed her personal practice. The flowers, in the context of this exhibition, act as a tribute, literally and metaphorically. One also came across several photographs of Patel alongside students, as well as of certain class exercises.

By positioning itself in the space of Jeram Patel as a pedagogue, this exhibition has opened up a space for further discourse and dialogue on the man and his work.