FIRST HAND: The India of our Everyday, seen without the rose-tint. 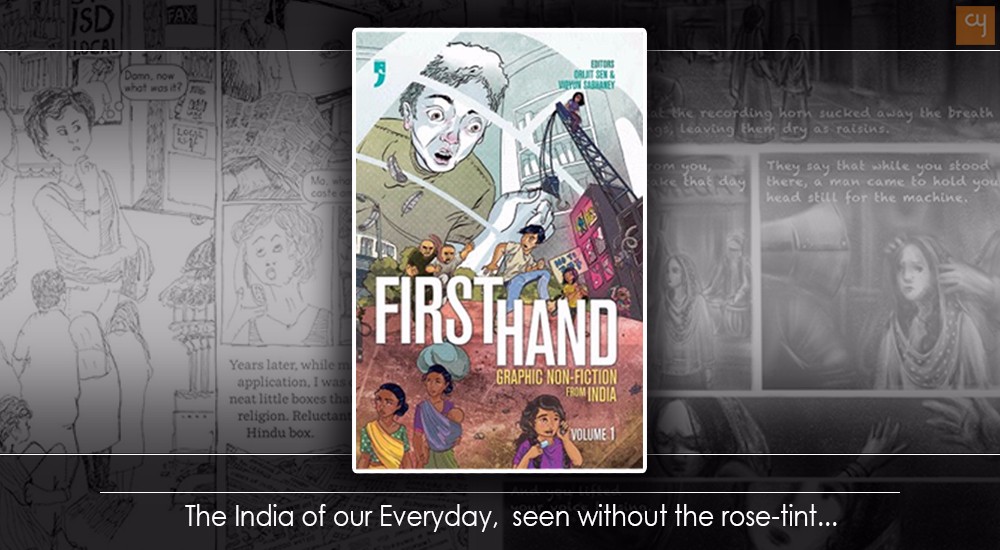 A Graphic Novel that is easily one of the most important publications of the decade. CY reviews:

Days after I read and put down First Hand, the graphic novel continues to linger in my thoughts – more so in the form of The Girl Not from Madras. Neha Dixit and Orijit Sen’s contribution to the book is beautifully told, brutally honest and powerful penned as much as it is lovingly illustrated. The Girl not from Madras, chronicles the story of a woman held captive in the badlands of Haryana and a group of Samaritans trying to rescue her from peril. A caped woman with a mask and the word ‘Laadli’ inscribed across her chest offers a running commentary. The masked chronicler continues to feed the story, essaying the aggravation, anguish and horror of dealing with the reality of the situation. The Police are of no help and are only eventually persuaded (rather hesitantly) to take action.

Designed and complied by independent writers, designers, artists, reporters,  academicians, researches and filmmakers from across the country, the comic narratives are separated into six genres : biography,documentary, autobiography, oral history, commentary and reportage. Many of these stories find little space in mainstream media. Its appalling since they talk about some of the most important issues of our times – migration, displacement, mining, peoples rights etc.

I began to read First Hand, India’s first-of-its-kind anthology of non-fiction graphic narratives and could not put it down till I was done. I was frustrated, angry, disappointed and moved into emotions I cant even describe as I read this collection of collection of 22 beautiful ‘comic’ tales that narrates the stories of people whose “voices have been lost in the drone of a 24-hour news cycle”. The novel stays true to the monochromatic palette, employing stark commentaries and sharply toned narratives as it continues to tell extraordinary stories of ordinary individuals.

Each narrater, with a voice of their own, therefore making each story, unique. There is a new lens for every tale breaking the monotony of the previous narrative styles.

The stories are contemporary – ones that you have read or seen, witnessed or ignored, talked about and forgotten – and are a contribution of the changing times in today’s India. Though it looks like a comic, there is nothing remotely amusing about these tales of the political and social riffs of our country. The comic chooses to keep away from the frivolous and dwells on the nature of its subjects and their encounters. The stories cover a vast time frame: From the pre-partition Punjab(Ellipsis by Ikroop Sandhu) to expeditions in Delhi’s metro (Transistor Can Be Bomb by Shruti Ravi), to a glimpse into the life of the great singer, Begum Akhtar (Akhtari by Rajesh Devraj).

The book is a culmination of over two years of brainstorming, discussions and endless story boarding eventually culminating into these comics.