LGBTQ+ Towards an Inclusive Society: A conference on understanding the queer community 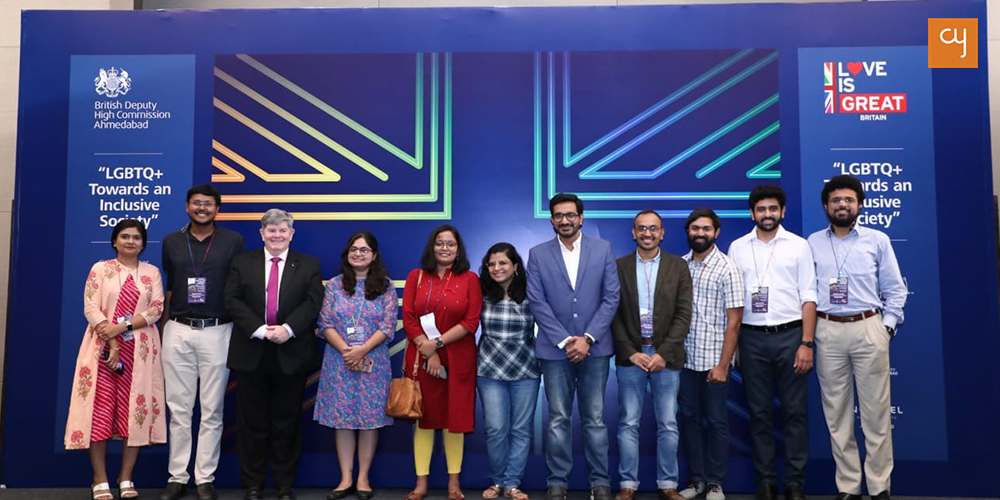 To sensitise the people of Ahmedabad about the LGBTQ+ communities and their struggle for rights over the years, British Deputy High Commission organised a conference to discuss how we can all contribute towards an inclusive society.

“Section 377, to the extent it criminalises sexual acts between consenting adults, whether homosexual or heterosexual, is unconstitutional.”

With these lines spoken by Justice Dipak Misra(former Chief Justice of India) and Justice Khanwilkar, Section 377 was overturned on September 6th, 2018.

To commemorate the first anniversary of this milestone event, the British Deputy High Commission organised a conference “LGBTQ+ Towards an Inclusive Society” at Novotel on Sunday, September 29. The event was supported by the Ahmedabad Chapter of Global Shapers and it concentrated on sensitising the audience about the challenges faced by the LGBTQ+ community and how we can create a more inclusive society for them.

The conference was divided into three panel discussions, each set of panellists concentrating on one integral aspect to understand the developments that have taken place since Section 377 of the Indian Penal Code was overturned.

The first panel discussion concentrated on the struggles that have been faced by the queer community and the steps that can be taken in the society after the revocation of Section 377. The panellists included Nitasha Biswas, India’s first Transgender Beauty Contest Winner, Karan Jadeja, a transman and the Program Coordinator of Vikalp Women’s Group, Vadodara, Urvi Shah, CEO and Founder of Arranged Gay Marriage Bureau, and Ishan Kaur Khalsa, an activist for Gender Equality and the Cultural Secretary at Lady Shri Ram College, University of Delhi. The panel was moderated by Dr. Sonal Pandya, HOD, Department of Communication, Journalism & Public Relations, Gujarat University.

From the discrimination faced within the society, especially Karan Jadeja’s own account of his fight against the society as a transman, to mythological representation of queers in our ancient scripts, the panellists shed light on various important topics that are essential to understand the LGBTQ+ community. Their observations helped the audience understand the changes that have come after the revocation of Section 377 and what steps people and the government can take to make them feel more inclusive in the society. Some of their suggestions included installing unisex washrooms in public areas, incorporating the topic of LGBTQ+ in gender studies so that children are more accepting of the community and fighting transphobia.

It is integral to understand the constitutional implications and views of our judiciary system as well as how the government has reacted to the decision of the Supreme Court. Hence, the second panel was curated to discuss the legal aspects of the LGBTQ community and the implications of revoking Section 377. Panellists talked about the key factors that made SC overturn the section and agendas which the society should concentrate on in future.

The panel included Advocate Sharvil Majmudar, Dr. S Shantha kumar, Director of GNLU and Tejas Motwani, Law & Policy Researcher and a member of Ahmedabad Global Shapers. The panel was moderated by Monica Yadav. The panellists explained how homosexuality is not a punishable offence anymore. In fact, the Supreme Court apologised for the discrimination faced by the queer community. Justice Indu Malhotra said, “History owes an apology to the members of this [LGBTQIA] community and their families, for the delay in providing redressal for the ignominy and ostracism that they have suffered through the centuries”.

They brought to light the fact that how medical centres cannot discriminate in providing treatment, irrespective of the individual’s sexual orientation and further explained the positive developments that have taken place in the Central as well as the State Government of Gujarat in this space.

Panel 3 : Role of Media in fostering an equal society

The third and final panel comprised media personnel who talked about media’s role in being a true mouth piece for the societal issue and bring to light the challenges faced by the LGBTQ+ community in their daily lives.

The panel commended the role of journalists who have walked the extra mile in bringing the stories of LGBTQ+ community out in the mainstream media. Deepal Trevedie of Ahmedabad Mirror shared about the fine balance that an editor has to take, considering the taboo that the topic faces. Sindhu Eradi whose subject area revolves around transgender issues shared the plight of this community and also pointed out misrepresentation of them in the mainstream media. Mihir Gajrawala corroborated with the panel on putting effort to bring out greater amount of non-mainstream stories of the community out there for readers to consume. Dibeyendu Ganguly shared insights on how his stories have found wide and long-lasting readership. He also shared that over time different dimensions of the subject are being brought out in media, and that is a positive sign.

There is also a darker side to the media’s role. Many from the audience felt that regional media has been consistently insensitive on the issue and has not done enough in breaking the taboos. The panel also touched upon the impact of New Media, which further includes digital mediums and content platforms, in doing their bit towards the issue. Eradi feels that the mainstream media hasn’t yet seen convincing depiction of LGBTQ+ identity. On the other side many felt, that even ‘shallow’ depictions in mainstream Hindi films, as in ‘Ek Ladki ko Dekha to Aisa Laga’ would do its bit towards the process of dissolving the taboo.

The session ended with a delightful talk by Manak Matiyani, Executive Director, The YP Foundation. Matiyani touched upon widening the scope of discourse, and pressed the need to look at LGTBQ+ community issues from a fresh perspective. He observed that attempting to fit the individuals from the community in the set social conventions may not work, and each of the issue has to be dealt with open mindedness and by keeping the person’s individuality in centre.

The conference observed a packed hall filled with sincere listeners who added to the depth of the ongoing conversation. Thanking the audience for their time on a Sunday morning, Peter Cook, British Deputy High Commissioner summed up his thoughts saying, “I think it will show you that there are people who do care, people who do want to see society evolve and move forward towards a more inclusive society. And I think that should give hope to people who are anxious and worried about where their future will lie and it will give encouragement to others to speak up and be brave enough to say that they want to be part of that forward movement, that they want to be a part of that progression to a more equal society. I certainly feel proud that we have been able to play our small part to bring everyone together.”

All in all the event brought to light a lot of issues plaguing the LGBTQ+ issue, and initiated discourse around the same in an open forum. We hope that the efforts continue and we all see a day when society is free of discrimination.

CreativeYatra.com is the culture partner for the event.