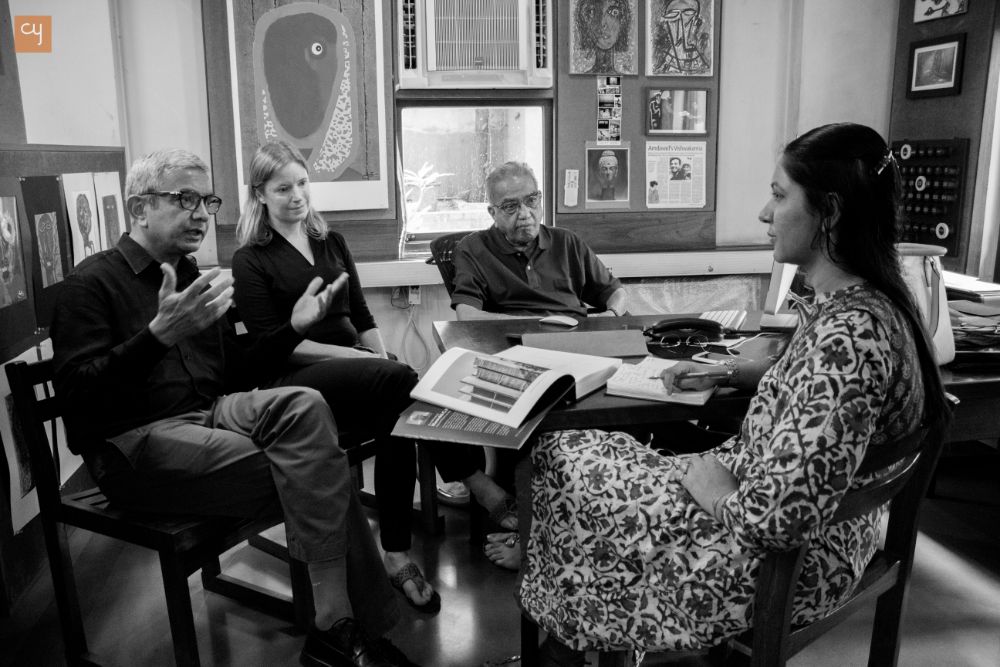 If at some point, you have sat inside Ahmedabad’s Patang revolving restaurant and pictured yourself enjoying a stroll at the Sabarmati Riverfront promenade, there’s a traffic of thoughts that confront you. You want to know the brains that created these people-friendly spaces. You wish cities across had a similar design language. You also secretly desire to know how these were executed. Gladly, the answer now lies in a 400-page book, The Architecture of Hasmukh C. Patel – Selected Projects 1963-2003, written and put together by Catherine Desai and Bimal Patel.

A couple of days after the book release at Newman Hall, we’re inside Paritosh building in Usmanpura where a handsome pile of books are stacked meticulously on architect Hasmukh Patel’s office table. They await his signature before making it to different homes, offices and libraries, showcasing a rich oeuvre spanning 40 years. The book, listing 51 projects, is clearly a tribute to 83-year-old Hasmukh Patel besides being “a contribution to the ongoing documentation of modern Indian architecture”. There are a good 264 photographs and 150 drawings in the book. “Each of these projects have been redrawn meticulously from material in Patel’s archive,” says Desai, who has been involved in the project for three years along with architect Bimal Patel, who worked on the project as a professional than as son.

“It is for a long time that we wanted to come up with this book but required someone to anchor it. We were looking at a structural way of putting it together. Catherine got in to it with a sense of detachment and that changed our way of looking at it. It was also a modest project to begin with, but along the way, evolved to being a much larger project. Also, it wasn’t just about presenting works but understanding the meaning; the experience of architecture is to feel it…,” says 55-year-old Patel, explaining how a structure of a building gets clearer when you see a drawing. Some of the drawings in the book were made as many as 10 times only to get the accurate line, size and related details. And, was the senior architect consulted at any point since he was the ‘subject’ of the book? Did he have a say on anything that went in the book? “No, nothing at all,” smiles the son, impressive and to the point. “It is our book and the good thing is he is not bothered by it. He’s okay with the book and its contents and that’s how most architects would do it,” he says, forthright and clear. Together, as each one looks at the other, the room cheers up to an impromptu laugh. 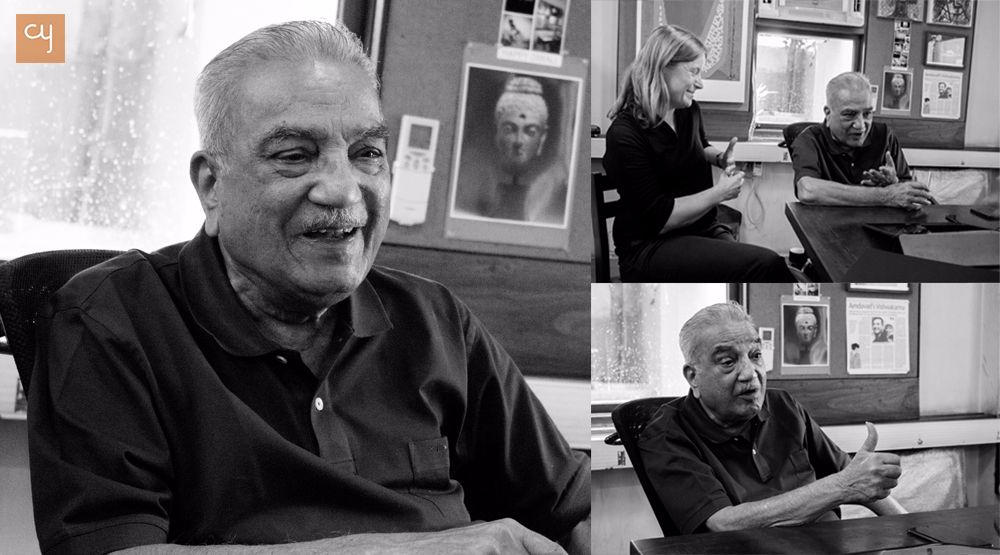 The senior architect appears joyous as Desai flips through pages resting on the chapter highlighting Kolkata’s Eden Gardens. I enjoy seeing the drawings and photographs in the book that are, as the architect-son put it, “investigations in aesthetics and style”. Clear and rational designs, modern outlook and highly practical, Patel’s architecture is as diverse and interesting as it is functional. St Xavier’s High School, Sir Sayajirao Hostels, Reserve Bank of India, Ahmedabad Electricity Company, Bhaikaka Bhavan, International Stadium, these are names that made it to the book. But there are many more that didn’t. “Each project had equal energy and thought put to it,” says Patel senior about his method, work ethic and style. “They belong to a deep tradition of 20th century modernist thinking”, Desai points out, stopping at pages that reflect the philosophy in the form of photographs.

So, was the book chalked out a certain way? “Bimal wanted to come up with a book like this,” begins Desai who has been in India for four years of which three have been about working on this book. “I was in India as an intern in the 1990s and had known about Hasmukhbhai and his work. It has been a great honour to discuss projects, the challenges, difficulties and opportunities they got along, besides going through archives and selecting 51 from over 350 projects. We had to leave aside many good ones,” says Desai about the book that has divided projects into categories – schools, private houses, offices and commercial development. There’s much to learn from the compilation. “This book gives you a language of architecture that is my very own. When I returned from the US in 1960, I was trying to understand the kind of housing required in our country,” says Patel, who pursued Masters in Architecture from Cornell University “but decided to return to my country despite friends and well-wishers advising I continue working in the US”. Recalling his frequent trips to Manhattan, “a place I have always loved”, Patel mentions the endless walks he took on New York streets, stopping by to see and study various construction sites along the way. What gave him company on those long walks was Louis Armstrong’s music. Eventually, Patel packed bags and decided to return to India. “I took a ship ticket to London…you see, I wanted to have a look at beautiful European buildings,  walk inside them. I have also travelled 14,000 miles in a car from the West Coast to the East Coast… I remember being particularly impressed by the Barcelona Pavilion and studied it for a few days. Along the way, I’d keep thinking of returning home and all that I could do for my country. I got back to Ahmedabad and was more like a student in the city that had many senior architects,” he says of those “good ol’ days”.

Another decision that shaped his journey was “when my father gave me Rs 19,000 and informed I was no longer a partner in work”. Patel was advised to buy land; he took his father’s advise seriously, built a house and began living in Bhakti Bungalow since 1968. Today, 48 years on, he continues to live there with his wife. “I’ve worked very hard, now I don’t work…it’s been almost 12 years. One of the very prestigious projects for both father and son has been the High Court. “We have to allow the young to flourish. Bimal was more qualified than me and I realised he could do it well,” says Patel, “who did more than a good job”. This big project apart, he nurtured a dream as well. “Yes, I told Bimal it is my dream to see people walk with families by the Sabarmati. He gifted me the Riverfront Project and gave it more than a 100 per cent,” says the proud father who takes a wheelchair walk on the lower promenade almost twice a month.

As co-author of the book, Patel appears content with the final product. Is that how he also feels about the architectural spaces in Ahmedabad? “We make buildings quite okay but not the spaces between them. We need to pay more attention to places around them,” he says. Did the thought of moving to another city or country ever cross mind, I ask. “Ahmedabad is home, no question of moving anywhere,” he says with conviction that resonates the heart. So, if he had to pick three favourite works of Hasmukh Patel, they would be… “The house I grew up in, the school I went to (St Xavier’s) and the school my teachers went to (Premal Jyoti),” he says in quick succession, this time the ‘son’ talking. Desai, too, lists her top three: “Premal Jyoti, Reading Centre at Gujarat University, Chinubhai Centre and, well, the place I live in, Centre Point Apartments.”

As we move towards Paritosh Gallery, there’s a lot more to ask as I see the photographs and the building models on display. But, perhaps the book must be read through first. Cover to cover. 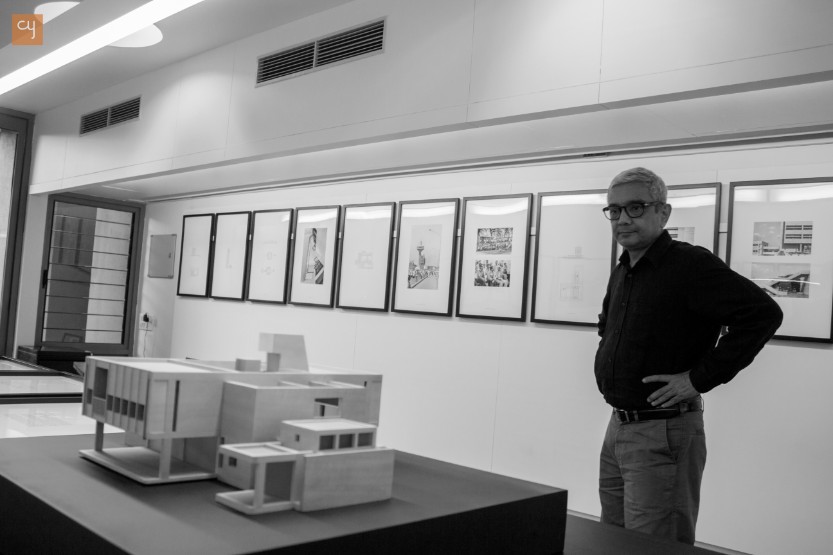