It’s heartening to see the late playwright and theatre person Hasmukh Baradi’s legacy being carried forward under the banner of Theatre Media Centre by his daughter Manvita and close colleagues. They presented two one-acts, Mahemano O Vhala and Gallery Room Gallery – one a revival with a new cast, the other a short story developed into a play by Janak Raval, who directed them with Naishadh Purani – at Ouroboros. Yogesh Takvani managed other aspects of the production.

The first play, a farce in form, reminds one of Eugene Ionesco’s classic The Chairs in the genre of absurd plays on incommunicability of life experience. In the French playwright’s work, a senile old couple welcomes and ushers in innumerable guests, all invisible, and leads them to unending rows of chairs. TMC’s play as well offers a situation in which chairs are being arranged, guests pour in and till just before the end they remain invisible. The focus however is more mundane and communicates fragility of human relations. A façade of respectability hides the fragility and life goes on. 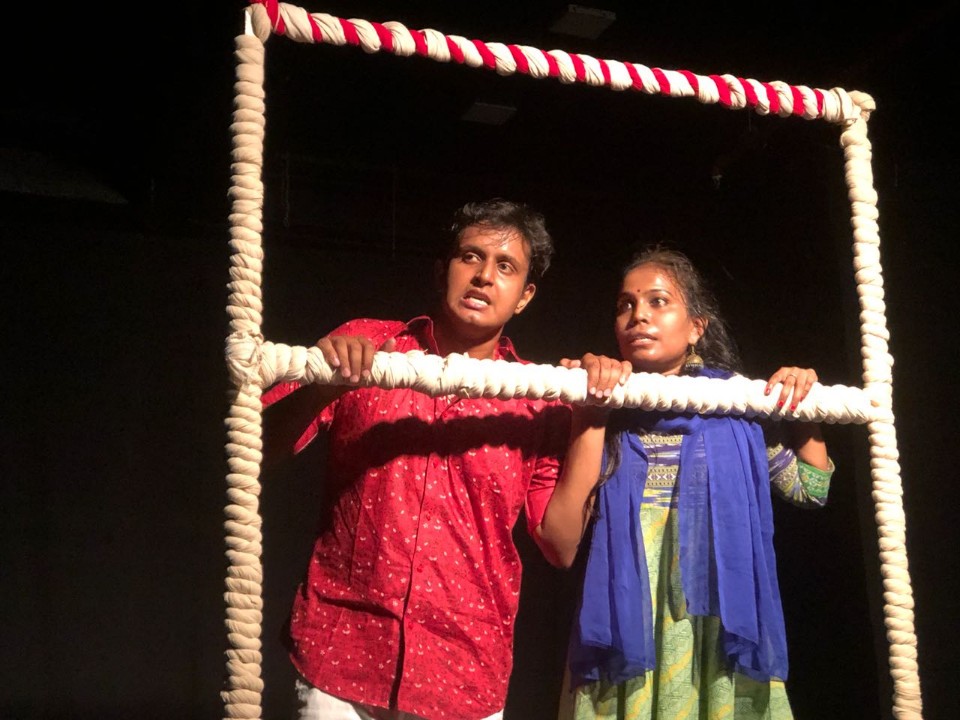 In a dramatic development, as guests start coming, the locked door doesn’t open. The hosts on their 5th wedding anniversary are eagerly waiting for their guests with yummy delicacies they have prepared keeping individual tastes in mind start talking through the ventilator with a variety of guests who have collected outside the door. Mallika and Ajay, chirpily played by Urvashi and Harsh, in the meanwhile, have time to pick up quarrels, sulk and get reconciled. Their weaknesses for attractive colleagues show up and, besides, they make observations prompted by a vane human interest on some of the guests. 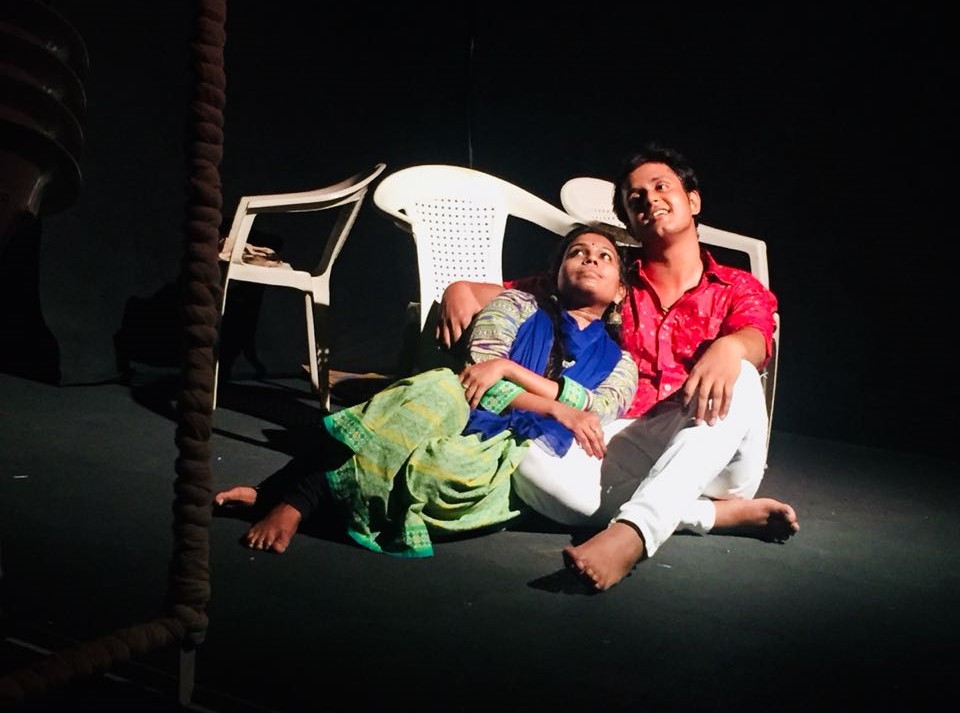 The second play, about half in length, absolutely serious in tone, turns out to be one of great dramatic interest with its character study in a refined Bengali ambience. Physical action is minimal and the inner action that keeps peeping out through whispers between the couple most of the time engages attention of even those young in the audience. The couple has a past. The circumstances that led to their marriage prompted by idealism twenty-five years ago find a parallel now in the case of their son Utkarsh, who has been waiting for their consent to his marriage. 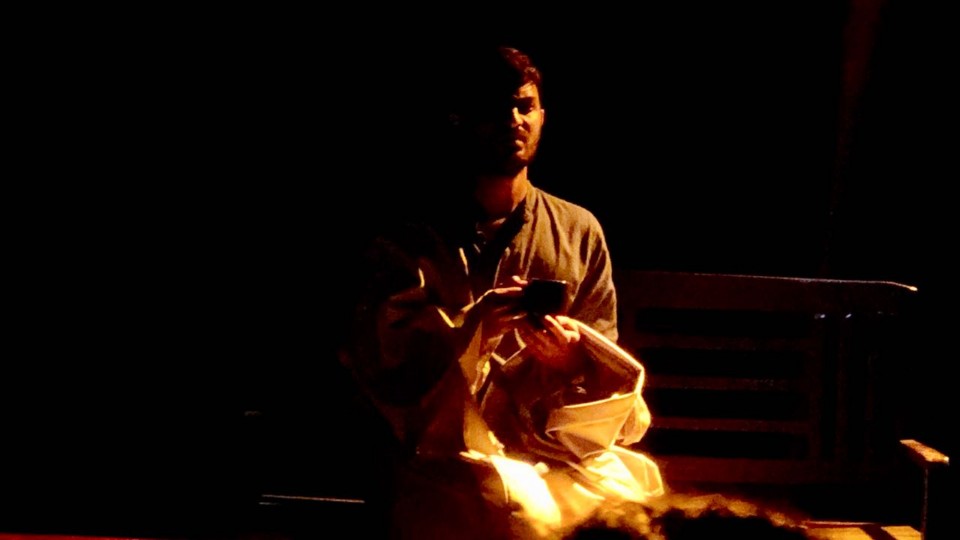 Hardik and Ruchie, probably in their debut stage performances, modestly emerge as characters in a short time. The husband, seated nearly till the end with his back to the viewers, has a shawl across his chest on a blue jabhbha when he stands up and a cheroot in hand. He has a dignified visage and a deep voice with the potential to carry controlled emotions. Though small of frame, the wife in her red sari and blouse with long sleeves and puffed out shoulders shows the capacity to carry and hold the anguished past in her eyes. 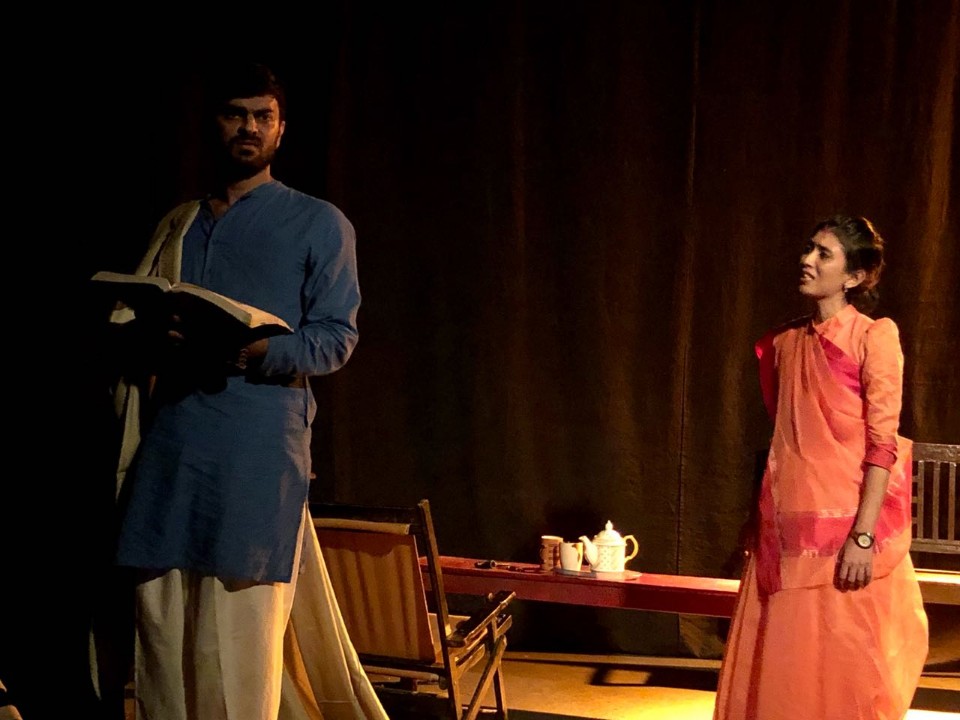 One wishes the little extra in Urvashi’s voice could have been transferred to Ruchie’s! The first play in fact has scope for a bit of controlled modulation and space for silence for its humour and irony to come across more effectively. The overbearing seriousness of the second play perhaps can be lightened with a bit of more lively modulation. The music and the lights support the mood.