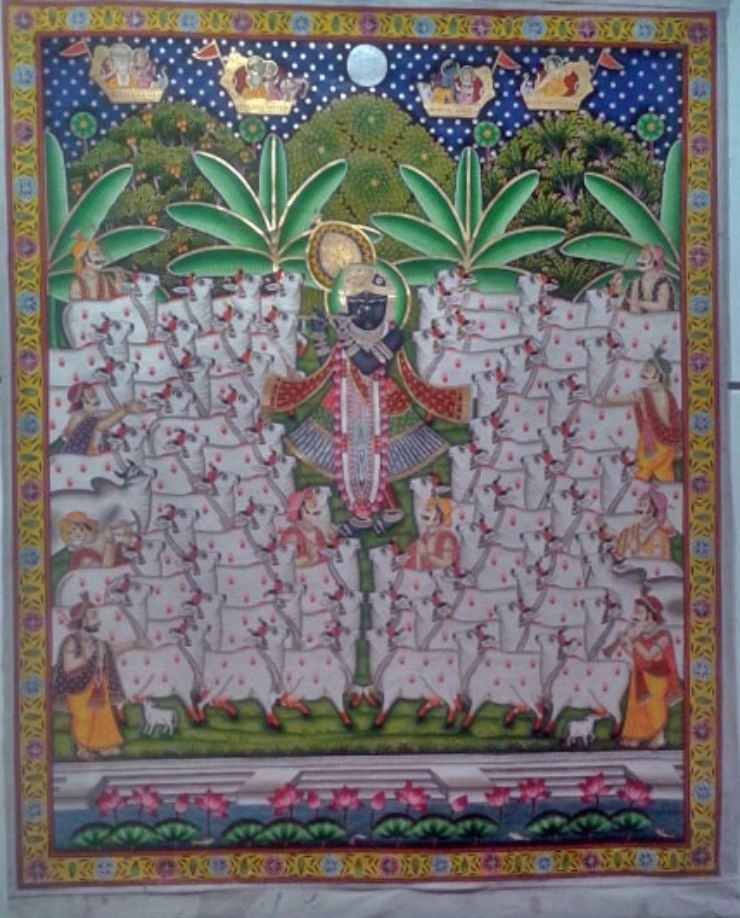 Legend has it that the temple of Nathdwara was established when the temple of Lord Krishna was being shifted. The Bullock cart got stuck and wouldn’t move; hence it was decided to establish the temple there, Nathdwara, literally the “doorway to the Lord”. The Pichwai tradition emerged from this city and is still centred there, though today it has a very global presence with exhibitions being held in places like the Art Institute of Chicago, USA.

These exquisite creations are distinct in their depiction of lord Krishna. The stories depicted are from the life of Krishna and resonate with all those who have grown up listening to his stories of mischief and valour. The Pichwai is an interesting story-telling device which gives the viewer reference to a story in a single image.

Pichwai’s are distinct in the use of vibrant colours, sometimes gold and silver based colours are also used in them, and these colours bring out the dynamic nature of the paintings. One can feel as if the scene is alive in front of our eyes.

The exhibition, besides the painted Pichwais, also displays works which were made using the technique of patchwork. Depiction of Krishna in various proportions and forms has been done. The paintings differ on the basis of different occasions, festivals and based on the season.

In this exhibition, one can see some present day creations which carry on the traditions of the artists of Nathdwara. Some of the paintings depict stories like the Rasleela when Krishna does the divine dance with the Gopis, which even enchants the Gods; Viraat Swarup when he shows Yashoda the whole universe in his mouth as a child; Naag Daman which depicts Krishna vanquishing the Snake demon Kalia as a child; this was the first incident when Krishna revealed his powers, some of the paintings also depict the different seasons like Sharad (Autumn). While a few depict Krishna in his Shyaam form. The exhibit begins with a map of Nathdwara on display, which tells the viewer about the origin point of this art form. 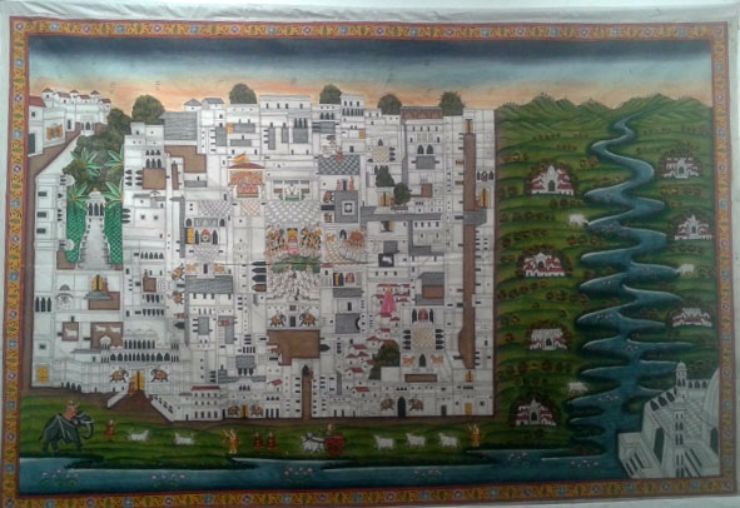 It is a wonderful experience to see the wide array of Pichwais on display in the Gallery. It is a vibrant and exquisite exhibition and a must watch for all Amdavadis. The exhibit would be enriching to an art connoisseur as much as it would be to devotees of Lord Shrinathji. That apart a great opportunity to view the traditional art form in its full vigour at one place. The exhibition is open for everyone and the exhibits are also available on sale to collectors.

The exhibition organised by Satyam Zankar was inaugurated on 22nd of March, by Shri Amit Ambalal and Shri Anil Relia. The exhibition is open till 27th of March, Sunday, between 4 pm to 8pm.