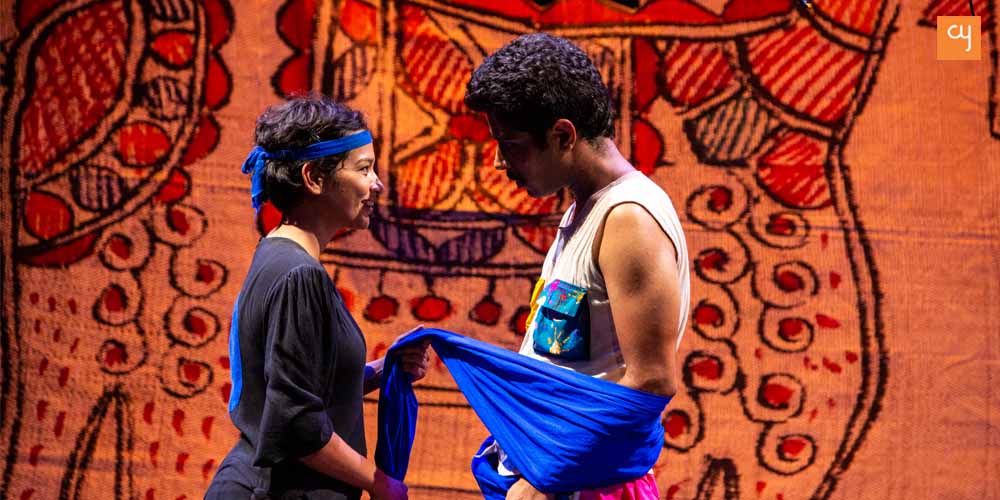 Qissa Kothi’s Romeo Ravidas और Juliet Devi, staged at Natarani on Day Two of its Sunday to Sunday Theatre Festival offers a different kind of experience. Pretty engaging in form and the communication it makes, it avoids being theatrical. With a simple sketch of a horse in colour along with a window-like small opening above its saddle as a backdrop and a few things on either side which cannot be suspected to be customary props, a young woman and a young man narrate their stories. One’s narration gets enacted with the other actor portraying and interacting as the characters coming in it. With ingenuity, they use the props appropriate to the context.

The young man is Ravidas a villager from Bihar. He fondly calls his horse Juliet. The young woman he meets in her dream is Kaushalya, whom in her college days her friends called Juliet.  There is an unhappy ending to both the stories. The story of Ravidas, a Dalit, is a story of survival against the self-proclaimed higher class while Kaushalya’s particularly is romantic with a tragic end, obviously brought about by a conservative society. Both live in a dark world redeemed by their gutsy instincts and the ability to live on their dreams. 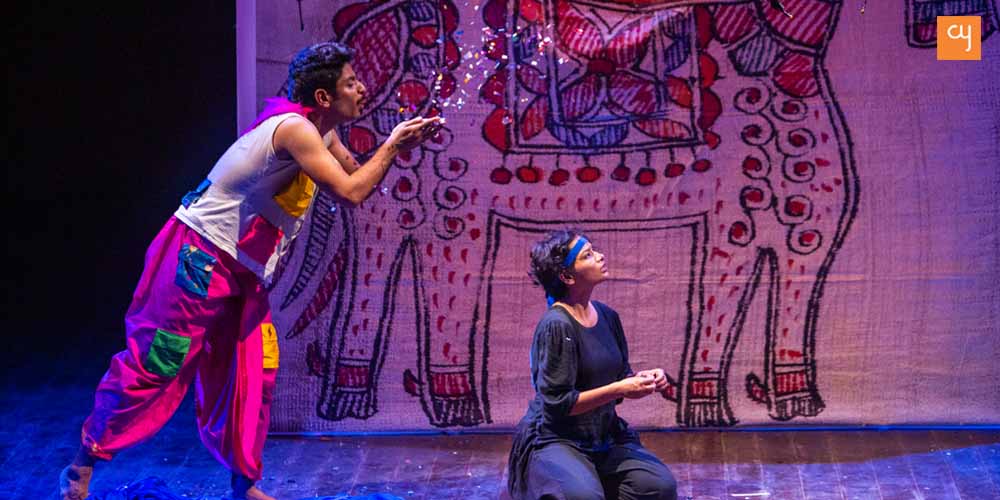 The two actors (Manasvi and Pooja), while they narrate their stories, also act out numerous episodes from their characters’ painful lives involving humiliation, confrontation and an end of life, as also of love, fantasy and anguish informally. This informal dramatic expression, rather than the conventional one as full-fledged theatre, serves two purposes. It calls upon the viewers to visualize the dramatic action as in real life, using their imagination. 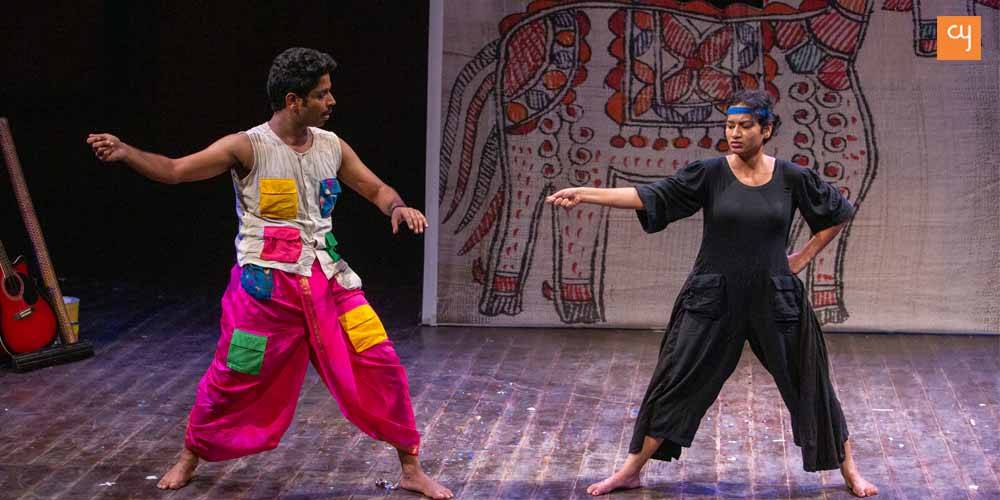 In the process, because of their identification with the characters and the suffering they undergo, the viewers develop empathy for the victims – for Ravidas, who is denied rights because he is a chamaar and for the young Juliet whose Shankar was a victim of ‘honour kiling’. One recalls reports of such incidents, one from Gujarat, the other from Tamil Nadu. It is a creative piece of playwriting (Sharmishtha Saha, Shubham Sumit). The direction is ingenious (Sharmishtha). Though inspired by specific real-life happenings, the characters have a universal appeal. They have the force of the writers’ and the director’s conviction for the cause. 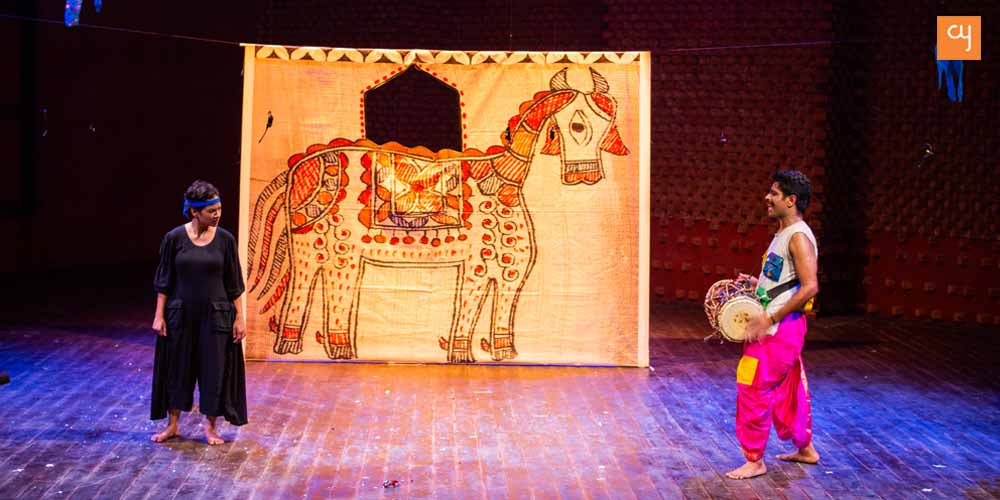 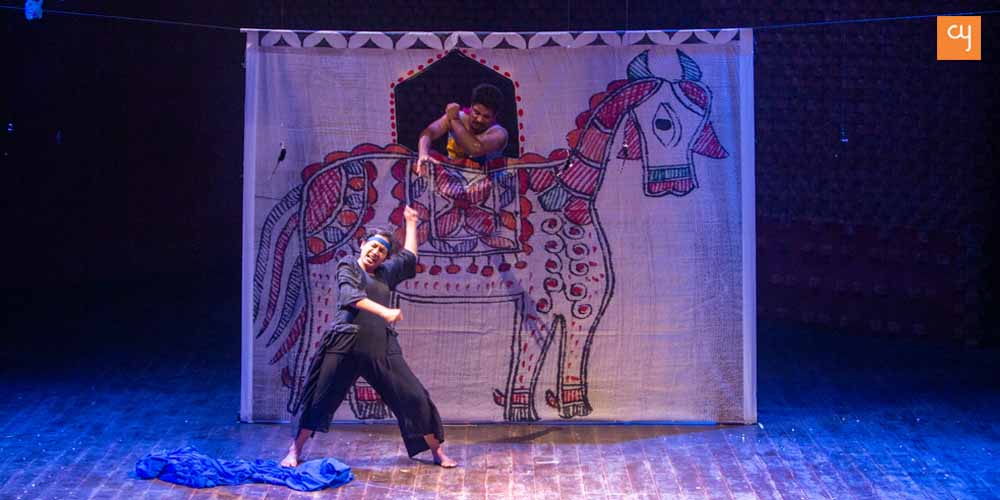 The play gets lyrical from time to time. You need to see how glowworms emerge on the stage! Just like the ones that appear in Romeo’s jhopadi. All over the hut and on his body as well – tiny, twinkling and bringing a good bhaagya! Juliet had seen a glowworm that could have changed her life. ‘When Shankar touched me, I felt a thrill all over the body,’ she recalls. Even their unpretentious utterances in simple Hindi with a sprinkling of endearing Bhojpuri on it at times smell of poetry. Any trace of lyricism left in the harsh contemporary world anywhere on our blessed land? ‘In your struggle, Juliet,’ Romeo says with disarming simplicity, ‘I’ve become a glowworm, look – everywhere, on the trees and sand and fields, on Shankar yonder, on our friendship!  …  is an expression of hope for our land.