Muzaffar Ali : Man of Many Parts Shows Another Side at 079 Stories 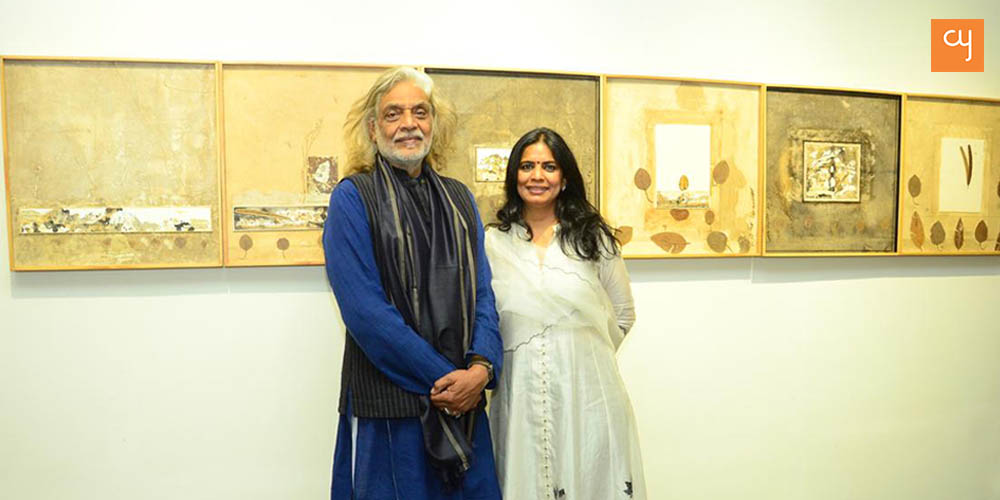 Muzaffar Ali wears a number of hats even as we instantly peg his identity more with films and music festivals. His magnum opus Umrao Jan alone is enough to validate the reputation that comes with his work as a filmmaker though he also made some other feature films later, while also diversifying into documentaries and shorts to promote artisans and crafts of his native Kotwara over the years. The films actually came as an extension, one may say, to his career that started in the advertising world at Calcutta, although interestingly, it took poet Subhash Mukhopadhyay to draw his attention to the potential of the film medium for influence while telling a story with effect and tutelage with Ray to actually go further.

Music Festivals like Jahan-e-Khusru in Delhi and Wajid Ali Shah Festival in Lucknow instituted by Ali, the music-lover, have shown not only his broader prowess to conceptualize and organize but also served the twin objectives of promoting Sufism for ‘openness in world relations’ and tourism for the host states of India. He is also known as a couturier, a pursuit that he practiced with collaborative lead taken by his architect wife Meera. It was on the path for reviving crafts in Avadh and providing some employment to artisans and others that he earned his identities as a ‘revivalist’ and ‘social worker’.

But it is possibly his dalliance with fine arts that seems to be comparatively less known, except perhaps in Mumbai where he has seemingly lived for a good part of his creative years. The very name of his show The Other Side – which opened on Saturday at 079 Stories – underlines this perception aptly by design or by default! To recount and contextualize his work in the domain, Ali started pursuing art early on but it was boosted when he set up a studio in Delhi in the eighties. Finding a different kind of intimacy in the medium like in no other, the artist in him has gone on ever since prolifically till about the 2000s by which time he had put up nine solo shows, the last known solo being in 2004. His forte, informs Ruby Jagrut, the shows curator, has been around collages that delve into nostalgia and elements of the old world. 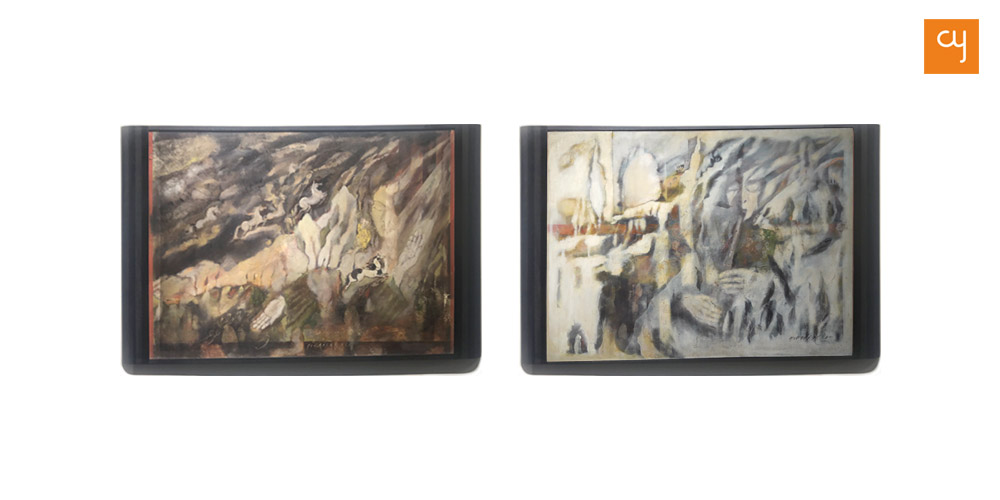 Much of all this myriad creativity of the man of many parts was encapsulated in a performance titled “Yeh Kya Jagah He Dosto” which was presented in the amphitheatre at the venue just before the commencement of the show, which Ali attended. While the title (of the performance) draws on the masterpiece of a dance number from the Rekha starrer Umrao Jan enacted on her, the biographical sketches of Ali’s evolution and growth were written with inputs from Ali and enacted as a solo by Chintan Pandya of theatre group Fanatika. Some able support from danseuse Rupanshi Kashyap and others on sound enlivened the performance which was interspersed with poetry from Ali himself and from the greats like Tulsidas and Rahim. 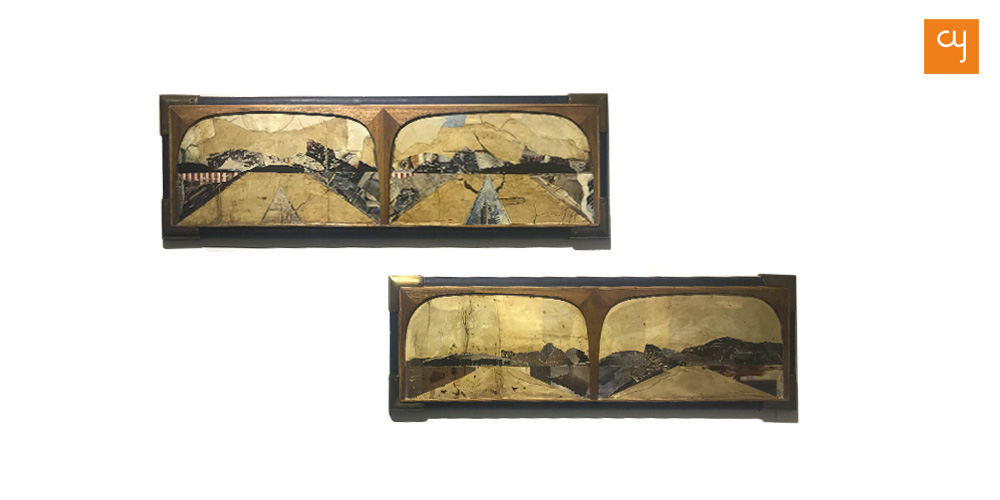 The present show features some 23 of Ali’s works in oil paints on canvas and mixed media on paper or wood. Precisely speaking, it is just about five works that are in oil and the rest are the other media. While Ali has had a way on occasions in past of keeping the works Untitled in what remains a typical presentation with many artists who choose and prefer to leave the field open for ‘wide interpretation’ by the beholder – and there can be no judgment on that choice which was the case at this show as well till the last hours when it was changed – the present series has been broadly segmented as Spiritual Landscapes, Converging Landscapes, Leaf Symphonies, Leaf Orchestra, Leaf Notations, Leaf Sonata and Oval Works. Each segment then has two to six works that conform to the segmental description. While Spiritual Landscapes a set of two created in oil on canvas depict multiple layers of spiritual recesses within a being, though also objectified with galloping horses and such kinetic energy, the Converging Landscapes are mixed media creations on wood along similar lines.

In Ali’s limited oils on show, two more works titled Ascent and The Song of the Reed stand out charmingly for their subtle figures of the artist’s recurrent theme of horses – on a skyward ascent here – and a woman in ecstasy coming off with her song on the reed!

The ‘Leafy’ works, about 18 in numbers, are collages of patched leaves, motifs, torn and worn pictures, documents of past visits, bits of calligraphy and a few figures here or there all of which are portrayed merely as suggestive of their presence as they tend to blur with the rest of the frame. It is precisely for this trait that Curator Ruby Jagrut describes Ali’s works as “an innovative blur between the shape and the abstract, between style and symmetry. His consciousness seeps through his work leaving an afterglow as a lingering effect on the viewer”. 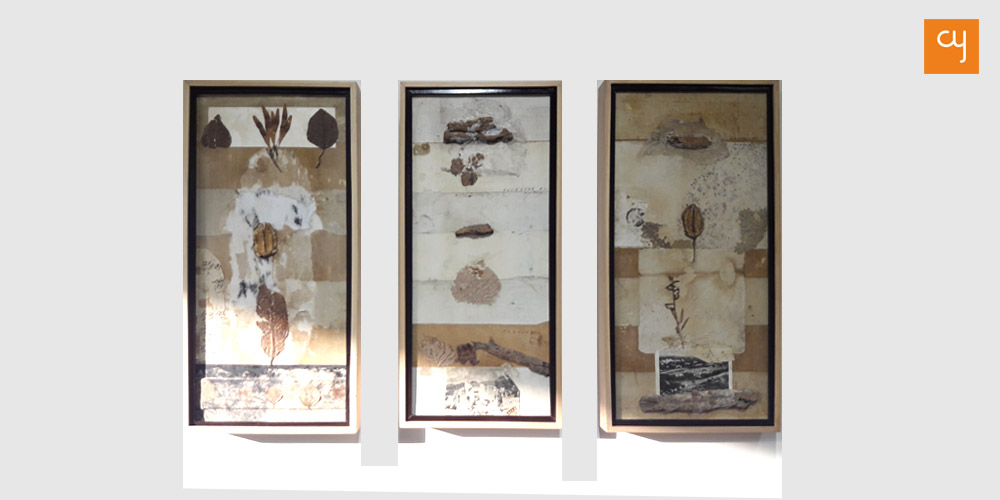 The piece de resistance in the show according to us is the portrait titled Yeh Kya Jagah He Dosto that draws on the nayika of the famous film. For those not in know of the connection, she could pass as a recreation of a bedecked and bejewelled dusky nayika from a Raja Ravi Varma repertoire! Mesmerizing in detail, a deep gaze, the melancholy look on a pensive face, this one work does wonders as it enchantingly beckons you to view it in long-drawn moments of internalization! Proof perhaps of how the artist was in love with the character!

Thanks to the grand spirit of collaboration on the part of Purva Damani, the show at 079 Stories is on till 1st March.