As a reminder of the things we leave behind and a message about the ‘Mother’, Bengali artist Muktinath Mondal’s solo art show proves to be a muse tour.

I have intuited the smell of a large margarita pizza while only glancing at its recipe on my 5-inch mobile screen. It is scientifically proven that our brain capacitates us to remember objects, touch and even odour, but I was recently struck by a contrary theory while visiting the ‘Myth and Reality’ exhibition of artist Muktinath Mondal – a theory about how easily we also overlook things and then eventually forget them! Mondal’s 30 artworks displayed at the Aloft Hotel at SG Highway from August 28 to September 10, 2017, explained to me how we overlook many pre-learned basics of life in a race to accumulate upgrades.

Mondal, who hails from the humble village of Tulia in West Bengal, has given viewers an opportunity through his art to look back on what they have left behind in the process of de-learning. His intimacy with local culture, folklores and ancestral customs is visible. I see a man holding a calf in his hands while a cow follows him along, accompanied by a few small animals and birds. The curator of the show, Kirti Parihar from Catharsis Art Gallery, explains, “I have been an art collector since the past five years now. Yet such a cherished celebration of folklore, where a tribal Shepherd is juxtaposed with Lord Krishna’s Mt Govardhana tale, left my creative buds tingling. Mondal’s brush strokes have an ability to convey intricacy in the subject’s expression, and when they are mingled with the tribal environ, they automatically connect viewers with an intimate nostalgia.” 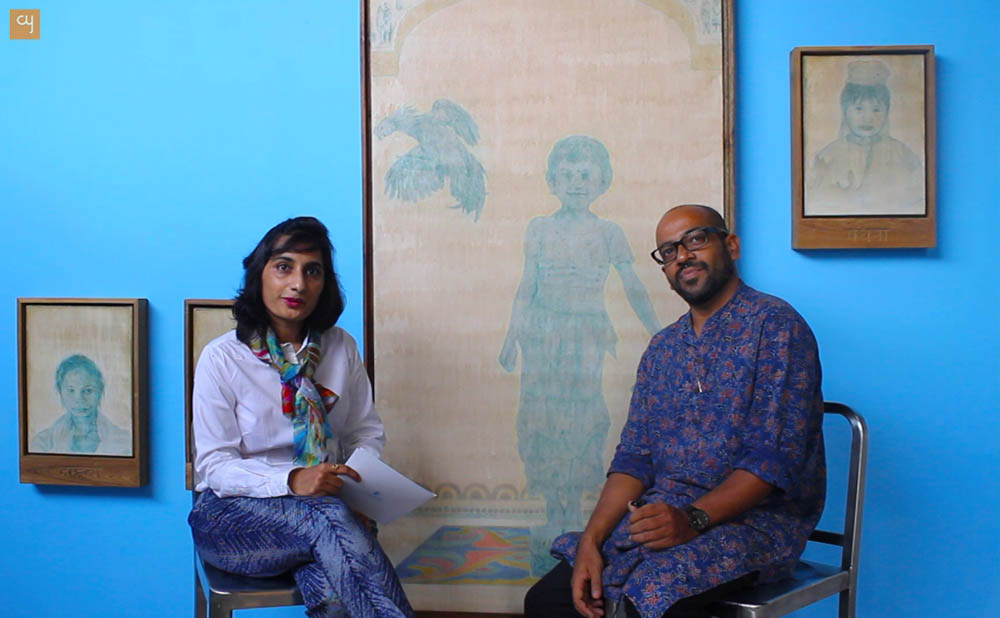 With more than 20 artworks based on the theme of conserving our grassroots identity, Mondal has prepared portraits of lassies on handmade paper, choosing colours of terra firma, aqua and vegetation, while designating to each picture the name of an Indian river. My eyes widened when I saw that each girl’s facial appearance correlates with that of the locals of the province wherein the river flows. The Sabarmati girl has the distinct features of Gujarat’s native people, while the painting of a Mandakini girl reflects the indigenous women of North-East India.

When we asked the artist how he was inspired to prepare such thought provoking portraits, Mondal jollily replied in his mishti (sweet) Bengali accent,

“I was always a botany student, but the theory classes didn’t appeal to my academic instincts. I was allured by the process of diagram making, which eventually inspired my artistic thoughts and that is how I ended up joining the University of Hyderabad, for my fine arts studies. I am an emotional artist. My creativity plays between the current environ and the left-behinds, but in this exhibition, I think it is the milieu of my native hamlet full of potters, fishermen, rickshaw-pullers and their families, that inspired my artistic subjects. In the River series, I wanted to portray the similarity between a river and a woman – the similarity that though both are considered as ‘Mother’, they are still exploited. A comparison between water pollution and the abuse of women, while conveying how both still nourish life on earth through their existence, is what I wanted to reveal in my ‘In the Name of River’ series.”

Mondal has been a part of numerous art residency programs, both internationally and with in India, and this is his second solo show since 2011. His artworks are unconventional in its subject matter, and yet possesses relatability, and that is what makes the exhibition unique.

The exhibition was inaugurated by architect and artist Hiren Patel on August 27 and is open for people till September 10, 2017. There is a guided tour between 04:00 pm to 07:00 pm.