The Last Supper: An apt Expression of Cross Cultures 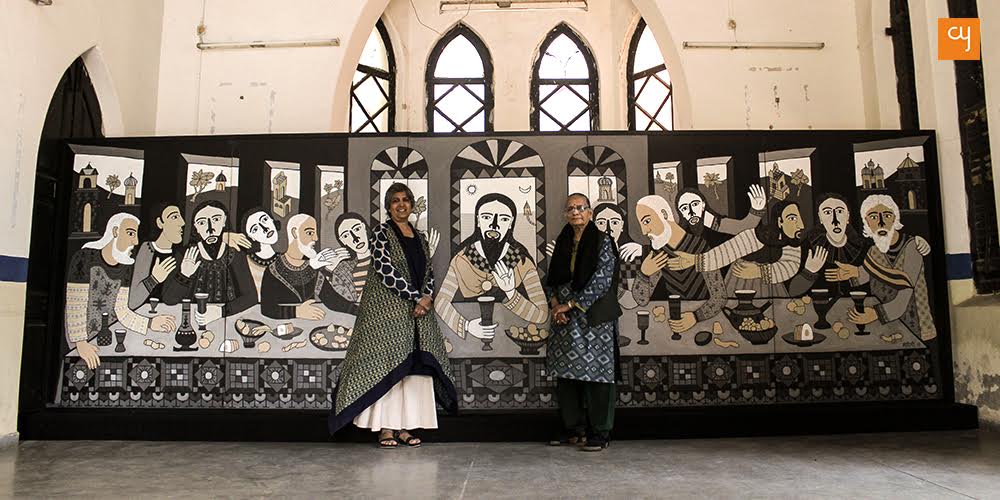 The Last Supper is a famous Biblical episode described in the Gospels which depicts the last meal taken by Christ with 12 of his apostles before his crucifixion. The episode details the interaction all of them had. A moving point of the interaction is provided by Christ when he prophesies that one of the 12 apostles is going to betray him.

This elicits varying responses and provides a great deal of emotions which fact has moved not only the storytellers but even painters who have chosen to paint the episode in commensurate detail and some of the works rendered famous are available till date.

Leonardo da Vinci and Tintoretto are two most famous painters who created their masterpieces with the same name. While Vinci completed his work as a mural (1495-98) in the church Santa Maria Delle Grazie in Milan; the other Renaissance master completed his work about a 100 years later in 1594 in Venice.

These works have in turn inspired many artists down the ages who have recreated their own studies of the episode with varying perspectives, styles and colour schemes. Come circa 2011 and Madhvi Parekh also got inspired to do the work on the famous episode in her own way, after seeing Vinci’s work in Milan; her locus and will to attempt that coming from her tryst with portraits and events in the life of Christ which she had begun attempting through 2006. The masterwork on Supper then came in 2013.

The works which were ab initio germinated and created after Madhvi’s visit to the Holocaust Museum in Jerusalem (a Museum dedicated to the persecution of Jews in Nazi Germany) followed by a visit to a nearby church in quick succession, all show her signature style, which is considered to be a hybrid of folk and contemporary influences. The creation of the series underscores a significant cross-cultural expression by artists through visits and other modes of exchange, even as it also marks a personal milestone in Madhvi’s creative journey!

It is this entire series on Christ which is now known and identified with the lead work The Last Supper and has now travelled to Ahmedabad under the aegis of Gujarat United Theological Society, Neekoee Foundation Ahmedabad and Seagull Foundation, Kolkata, after being shown in some other cities since its first show in 2011.

Nineteen of the 24 works of the series now on show in Ahmedabad have been done as reverse paintings on acrylic while five are pencil sketches. The reverse technique on acrylic is seemingly an evolution of the reverse painting done on glass outside India or of the Tanjore style, if we think indigenously. The reverse technique on glass had mostly found application in churches for painting icons of Christianity as also the Biblical stories.

The idea with focus on the location and its traditional aura of low lights, informs Neena Naishadh, a co-presenter of the show, was to keep the Christ-based show as near to a chapel-church premises as possible. The side hall in the Chapel in the IP Mission Campus being a 100-year plus old heritage structure became the obvious choice for the display of the biggest titular work The Last Supper and seven major works. So this room displays works like Journey of Christ (2006), Christ Traveling with Animals (2007), Portrait of Christ (2007), Christ Travelling with Disciples (in a boat) (2009), Christ on the Cross, The Cross and an Untitled/Unlabeled work. The floodlighting though there is not focused on works purportedly to keep the glare away while subdued candle lighting is relied in corners to achieve the objective.

The lead work is replete with details while you can find three patterns in the portrayal of sets of four men each among the twelve apostles seated on a table, food and wine glasses laid in front of them. Jesus is known to have broken bread and shared it among all of them as symbolic of his body during this Last Supper. While all subjects in this titular work, as also in other works have typical noses, the old men are captured bald with white beards while other eight men are divided in two groups insofar as the similarity of their looks. Christ is understandably captured frail and weak, his bare chest bones showing visibly in the two works about the Cross.

The other room has sixteen works like a lying Christ surrounded by eight of his disciples in lamentation; Christ with two Disciples, wherein he is shown with an aura around his head; Christ Came to My Village I and II and more in the same reverse painting on acrylic. Besides these works, there are five pencil sketches on other episodes about Christ. Most works reflect a typical sheen of the acrylic sheet while some show a tinge of red and a lot of black. Depending upon the aesthetic sensibilities, one may associate these hues with the tragedy and gloom surrounding Christ and his crucifixion.

As with many of Madhvi’s earlier works, The Last Supper has been produced by art houses as a limited edition affordable serigraph.

Surely a good one to watch the goodwill show will be on till Sunday, February, 24 between 4 and 8 pm every day at the IP Mission.