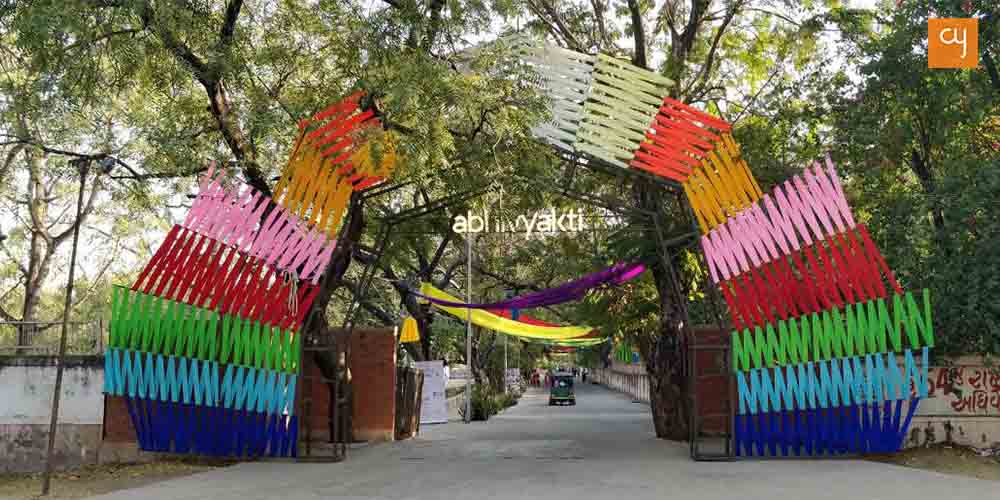 Abhivyakti Edition 3 has commenced on Friday evening with a play, a musical and a large number of visual art installations but without any hullabaloo. A modest and elegant start sans any fanfare of VIPs where people walked in coolly, in good numbers and the curators of all the segments were introduced and it shot off; but a few things seemed to be still being put in place!

Spread across the entire courtyard of the venue – the Knowledge Consortium of Gujarat – the visual arts remind one of the displays at the main street around Kala Ghoda near Jahangir Art Gallery in the Kala Ghoda Festival of Arts of Mumbai, which incidentally just concluded its 2020 edition last Sunday.

While we intend to look at the visual arts section in batches for the sheer scale of the exhibits to be seen here and their underlying concepts, we deal with three huge installations, to begin with on the first day.

In Between the Lines, The Plinth and The Funny Bones are three larger than life installations that have been placed strategically in three corners of the central courtyard at the venue. The installations are eye-catching not only for their size but for their visual appeal that instantly grabs a lot of eyeballs. It was a rather pleasant coincidence that the three installations that we stopped by for on Friday have been pieced together by artists belonging to CEPT – The Centre for Environment Planning and Technology, Ahmedabad! 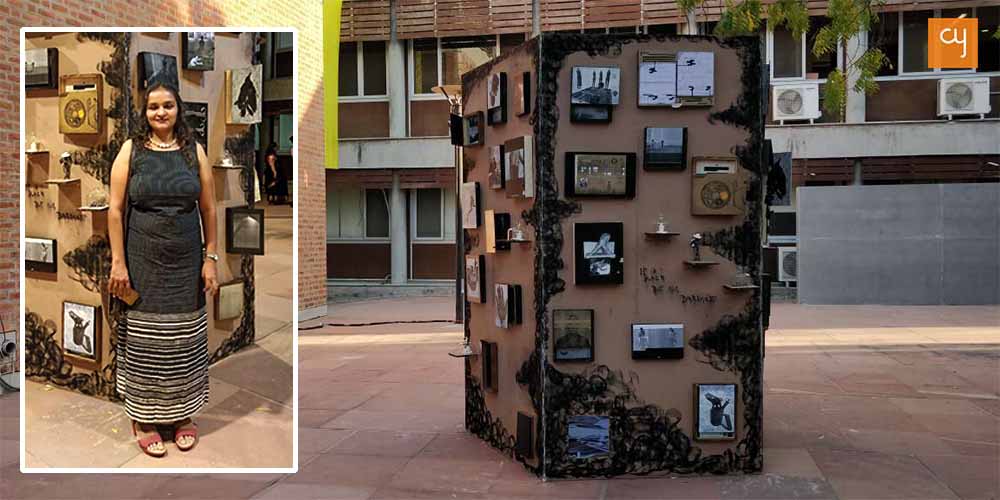 In Between the Lines by Komal Mistry is a rectangular pillar-like installation that features a number of mini installations on its body all around. Plaques or boxed mini installations are a mix of painted figures, quotes or sketches that lead or provoke a thought or two with regard to women’s issues as you lift the lid on them. Once again can’t help marking the coincidence that the inaugural play which was in progress at the amphitheatre on the other side of the courtyard was also a string of powerful soliloquies about women and gender issues. That, in fact, is a theme that has recurred with many women artists in the recent weeks!

Back to the painstakingly produced installation by Mistry and one may say it shows a great deal of commitment on the part of the creator to bring out a variety of diverse aspects and a range of issues that keep the other half of the mankind in a struggle to prove itself; even as the members of this fair set successfully juggle between multiple roles which itself is an indicator enough that they needn’t prove anything to their detractors who may not be as versatile! 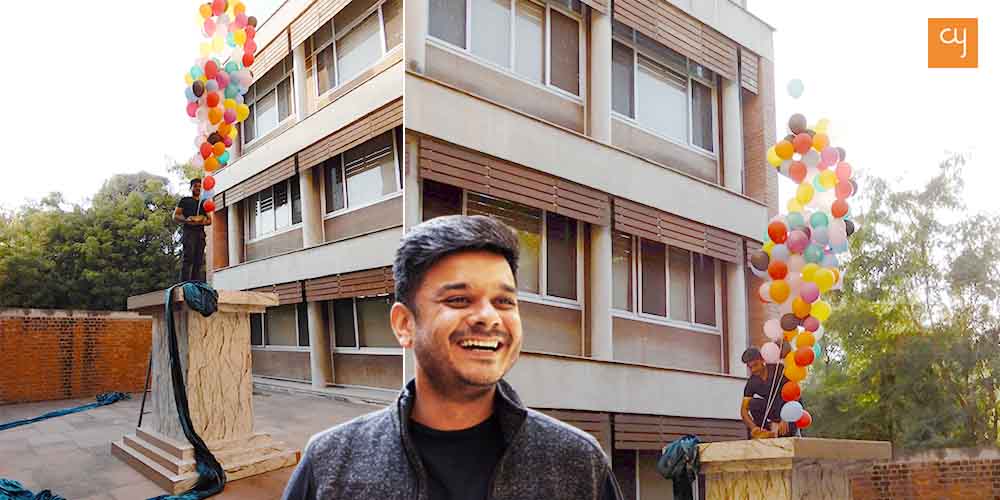 The Plinth or The Pedestal – an alternative caption coined by us for the creator Jagrut Raval – has been placed in the smaller courtyard of the classroom block that sits on the Westside of the campus across the main courtyard. A physical work created in lightweight wood-board covered with white and grey wallpaper, this work underscores the utility and significance of metaphorical ladders and pedestals that people tend to use in their upward climb in life. This pedestal has a set of balloons perched atop that keep swaying and floating with the wind as if to depict the temporary, wavering and shaky nature of worldly success acquired with the help of “ladders” and “pedestals” in all spheres of life. 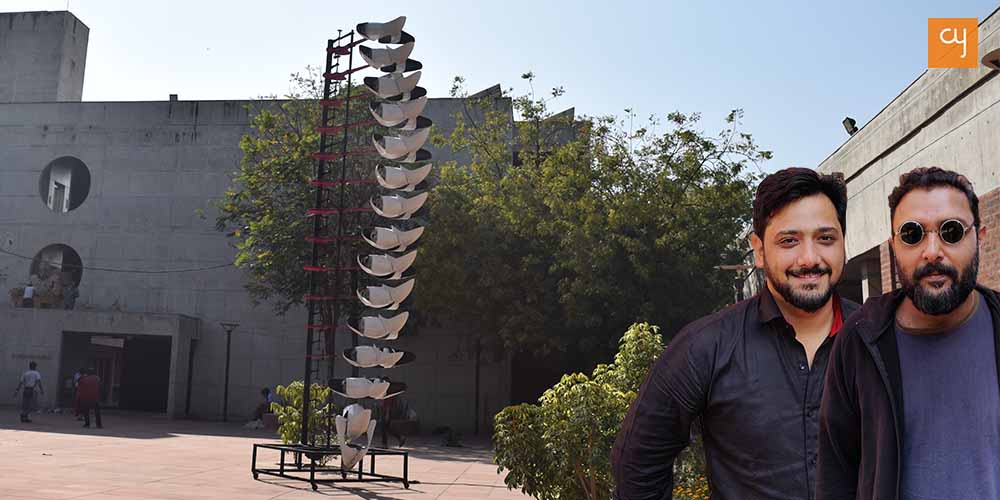 The Funny Bones is seemingly a caption that has more to do with its own catchy and feisty imagery rather than the real content of the installation in this case. An installation that possibly has the best visual appeal for its recreation of human vertebrae, this one is a “kinetic installation”, by Anuj Anjaria – a CEPT-ian – who also runs a studio for such art in motion besides teaching and has created this particular piece in collaboration with Siddharth Kararwal of Jaipur, who in turn has a master’s in arts from MSU. The moving column of the backbone signifies an “oscillating funny bone obviously when tickled nicely” on one side and a rudderless shaky man on the other, atypicality of the present escapist and non-committal society.

The evenings at Abhivyakti including the display of arts will start at 5 pm everyday till March 01. Needless to point out that there is a lot in both visual as well as performing arts arena to pick from at this Fest sponsored by UNM Foundation. Entry is absolutely free and ample parking is available at the venue, which has hosted two Lit fests successfully over the last two years seems to be emerging as a popular central venue alongside Kanoria Art Centre and CEPT combine. What needs a little attention are the narrations to be put in place for artworks, the parking lot as also the steps in the amphitheatre.

Art buffs have a full fortnight to go and check out the arts at Abhivyakti, which is no less than Ahmedabad’s own answer to KGAF!