Musician and composer Shruthi Vishwanath celebrates women poets of the Bhakti movement from as far back as the Medieval times. She reclaims the ‘Mystic Feminine’ in a musico-recital evening in Ahmedabad. 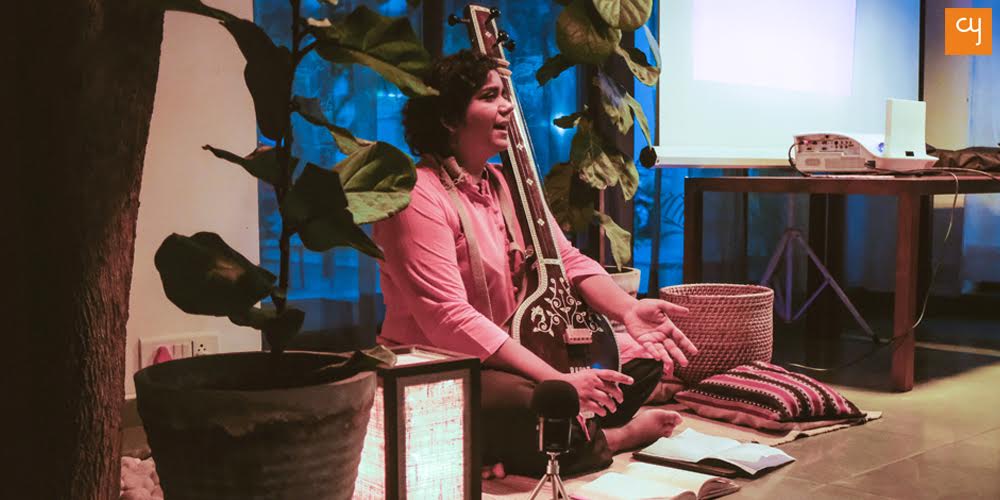 The singer swayed along to the rhythmic strumming of the tanpura. Her shadow swayed behind her in tandem on the wall. The rasikas (the connoisseurs of music in the audience) were captivated. They were completely transported to a time when women poets playfully spun stories around the warkari poet-saints, spinning in circles hand-in-hand while doing the ‘fugdi’ with their god Vitthal. Shruthi Vishwanath was the medium for the evening. A musician, composer and educator, Vishwanath has been deeply drawn to the tradition of the mystic poets, and is especially involved in reviving the works of the medieval female poets of the warkari tradition, who are hardly known even in the local warkari communities. Vishwanath, who composes songs around the poetry of these female poet saints, enchanted the audience with her emphatic, full-voiced singing, set to the strumming of the tanpura and the occasional manjira. At the same time, she explained and translated the poems from Marathi to English for the audience, outlining the themes that make the poetry written by the warkari female poets unique.

The warkari tradition is a religious movement that developed in the 13th century in response to the increasingly polarising vehicle of the Hindu religion. The religion of the warkaris was not a self-isolating bhakti (devotion), it was supposed to be a joyous celebration of the god Vitthal. In the Mystic Feminine, a musico-recital evening held on October 7, Shruthi Vishwanath took the audience along on a musical and historical journey through this warkari tradition. The recital took place at Project Otenga, a lively yet peaceful cafe in Ahmedabad, and was followed by another iteration at an intimate, warmly lit home in Ahmedabad. 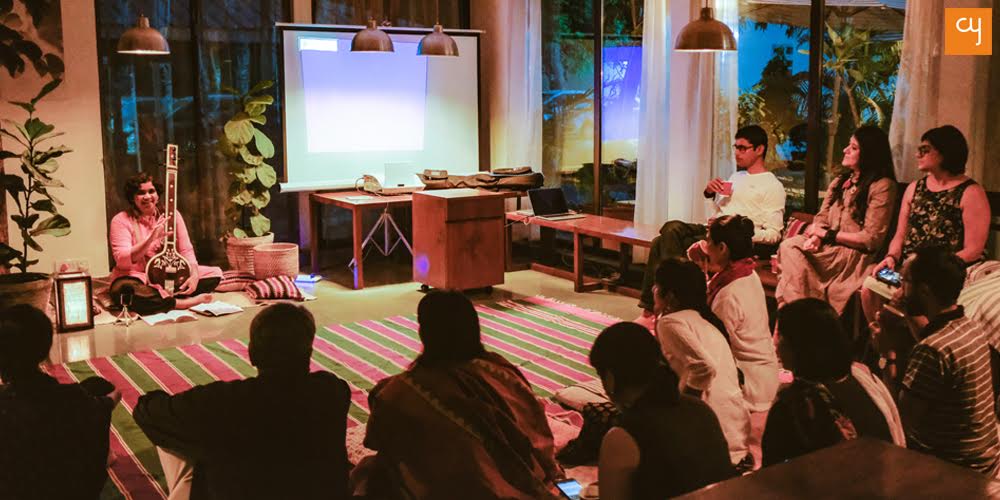 Over the years, several poets have written in the warkari tradition in the local and accessible language of Marathi. The poet Gyaneshwar is known to mark the beginning of this long trail. The abhangs (devotional poetry) of Tukaram are popular, as well as of Namdev and of several others, but the names you don’t often hear are of the women poets – Zana bai, Bahina bai, Gona bai and Mukta bai. Why is this so?

In pursuit of this answer, Vishwanath often travels to various warkari communities where the tradition of singing poetry is still alive. She tries to unearth the reason why poems by female poets are not sung. While the religion of the warkaris does seek to banish boundaries created by gender and caste, it has not always accomplished the latter goal, as Vishwanath has found in her search. She often doesn’t get much of an answer to her question, besides the usual response from the people of the community that “of course they (the songs of female poets) are sung!” But when asked the names of these female poets, they usually have no specific answers; there’s only an uncomfortable shifting of the feet, followed by, “It’s all the same anyway, why does it matter?”

But Vishwanath pays tribute to these little-known women poet-saints by giving them credit for their bodies of work. There are certain specific themes in the works of female poets that differ from those in the works of male poets. The theme of housework is one such theme, for example. Though one might see references to housework as just being mindless observations about daily life, Vishwanath stressed the need to see beyond the first impression, to realise how these subjects are metaphors for the womens’ thoughts. For example, Zana bai refers to the god Vitthal as a friend who helps her ‘sweep’ and ‘lifts her burdens’. Interestingly, this points to how the followers of the warkari philosophy were not very God-fearing. They imagined God in a very humanistic form, as their friend, their helper. Vishwanath explained,

“We are fed the notion that Bhakti is singular. (But) These women had such varying relations with their lord, their belief system.”

In much of Zana bai’s poetry, Vitthal is the friend helping her with chores, or even the lover keeping her company. In her poem, Zana bai also sees the divine in the intensely familiar act of grinding grain, “I sing alone, but another voice always seems to respond… Vitthal hears Zani’s feelings.” Notably, Zana bai is not saying that Vitthal hears her prayers or pleas, but that he hears the more neutral and personal “feelings.” The perceptiveness of the poetry is veiled subtly in such metaphors. Zana bai was a Dalit poet. A servant in the poet Namdev’s house, she was actually postulated to have been illiterate. Despite the stigma that her social and educational status drew at the time, Zana bai’s vast body of poetry was still well documented.

The female poets in Vishwanath’s performance came from all walks of life. In addition to Zana bai, there was Gona bai, who was the mother of Namdev, who sang about the struggles of having a son who was so steeped in religious fervour that he forgot his worldly business entirely, turning his family over to hunger and poverty. As the warkari men went off on their religious travels, it was often the women who were left to deal with the practical household tasks, shared Vishwanath. 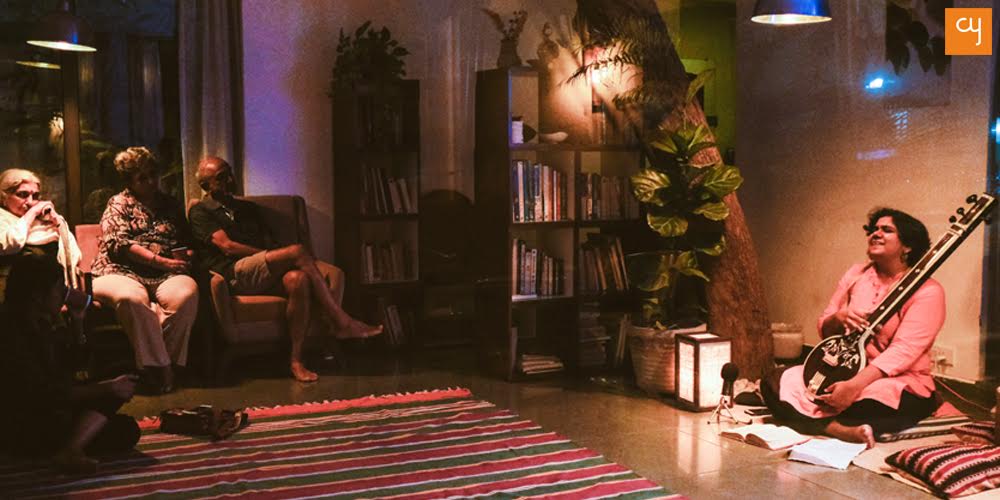 Another poet, Muktabai, who wrote Munge udale aakash, “The ant flew into the sky and swallowed the sun,” ends her poem in laughter. Gona bai is another poet who also writes in her laughter; she does so in the poem where she scolds her son. Vishwanath was inspired by how these women laughed and rejoiced in their bhakti despite their struggles. She was also inspired by the seeming lack of shame in the poets’ writing. One poet wrote about how “the veil has slipped, yet I will walk in the bazaar, who dare stop me, I have become your [Vitthal’s] whore.” Vishwanath performed all types of poems to bring to light the diverse thoughts and vast subject matter of the poems written by the warkari women.

Explaining the intuitive process by which she composes tunes for every poem, Vishwanath said that she composes according to the bhav (emotion) of the poem, not just according to the technical aspects of raag and taal. She remembered that the last time she visited Ahmedabad, she was struggling to compose a melody for a poem for the longest time. But as she made her way to the Conflictorium museum in Mirzapur and sat in the museum’s balcony overlooking a busy street, inspiration suddenly hit her and she composed the entire poem. “The composition always comes from here,” she emphasised, pointing to her heart and gut. “Never from here,” she said, pointing to her head, and smiled.