The artworks of creative pundit Soumitra Chatterjee are everything that an uninitiated artist can hope to witness to trigger him or her into grabbing the nearest pen and scribbling his imaginations. Chatterjee talks about art, life, cinema and celebrations with his art companions, the veteran artists Jogen Chowdhury and Manu Parekh. 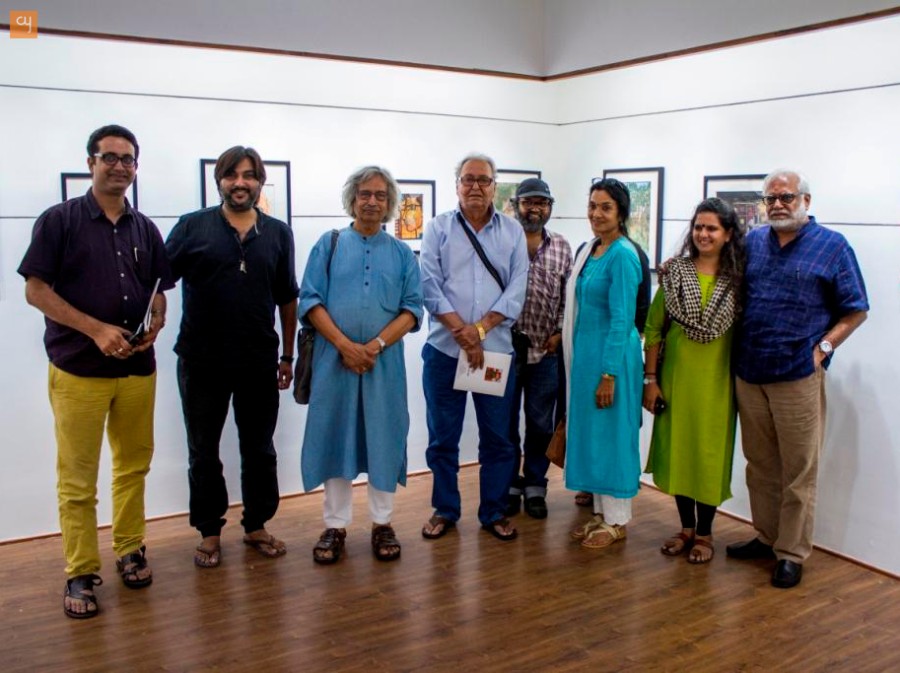 People often question me about my critiques of art. Their questions usually conclude on the same note of curiosity – “How can you comment on a painting or an exhibition, when all you can draw is the National Drawing of India(a term coined by standup comedian Biswa Kalyan Rath to signify those typical drawings from childhood imagination, having two mountains, a rising sun, a house with a smoking chimney, a tree with rounded foliage and three birds in the shape of ticks)?” To all of them, my answer remains the same, “I am an independent art commentator who possesses and reflects on the common man’s viewpoint towards these creations. I am not clouded with the preconceived notions which are sometimes cultivated by critics after years of having received formal training in art concepts.” I was beaming during the press conference when I heard veteran artist Manu Parekh speaking these same words in reference to the artworks of Soumitra Chatterjee.

Chatterjee is a Padma Bhushan Bengali dramatist and poet and also India’s first artist to receive the title of Commandeur de l’Ordre des Arts et des Lettres, France’s paramount honorarium for artists, and the Legion d’Honneur, France’s highest civilian merit. Having featured 14 times in the films of Oscar winning filmmaker Satyajit Ray, Chatterjee is a Dadasaheb Phalke Award winning actor who began his career in films in 1959 with Ray’s Apur Sansar. Since then, he went on to act in more than 84 films till date. And to add to this is one of his most remarkable triumphs today – the fact that he is a sheer self-trained creator rather than a formally trained artist – a fact that corroborates with my ‘art ideology’. 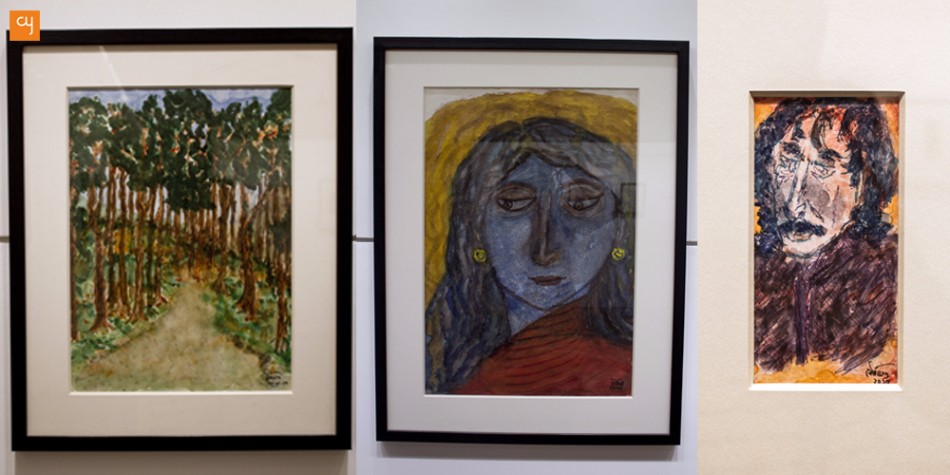 The reason why I think Chatterjee’s doodles, sketches, colourful line drawings and paintings are worth being seen, even by non-art devotees, is because they have an intense thought process behind their formation, whilst not being restricted to theoretical conclusions. There are portraits made on canvas, handmade paper and even on postcards. These have been inspired by the artist’s surroundings and been made spontaneously by him as and when thoughts have arrived. They look like the kind of natural instincts that spill onto paper when one is engaged in a really long conversation over the phone, with pen or paintbrush in hand, and constantly drawing a visual based on the flow of the conversation. The spiral pen lines, the elongated brush strokes and some finely drawn examples suggestive of Cubism are distinct from the aesthetics of the Bengal School of Art. But they are honest expressions of one of India’s most celebrated self-trained artists. There will be some instances when onlookers will notice that the subjects of the portraits are surreptitiously looking at you, as if striving to hide a story. So do get a little closer while sneaking a look at these paintings. Who knows if they will whisper to you a poetic tale about Chatterjee!

It was delightful to see Chatterjee exhibit his 30 visual artworks, under the invitation of the Satya Art Gallery at Navjivan Trust. Artist Jyotirmoy Bhattacharya has curated the solo show. It will be open for viewing for art aficionados from September 8, 2017, to September 24, 2017, on the grand off-white walls of Satya. Gallerist Vivek Desai, who is himself a visual art lover and a thoughtful photographer, assembled artist Manu Parekh as the Chief Guest, and called one of the most renowned artists of the 21st century – Jogen Chowdhury – as the Guest of Honour for the exhibition’s inauguration. 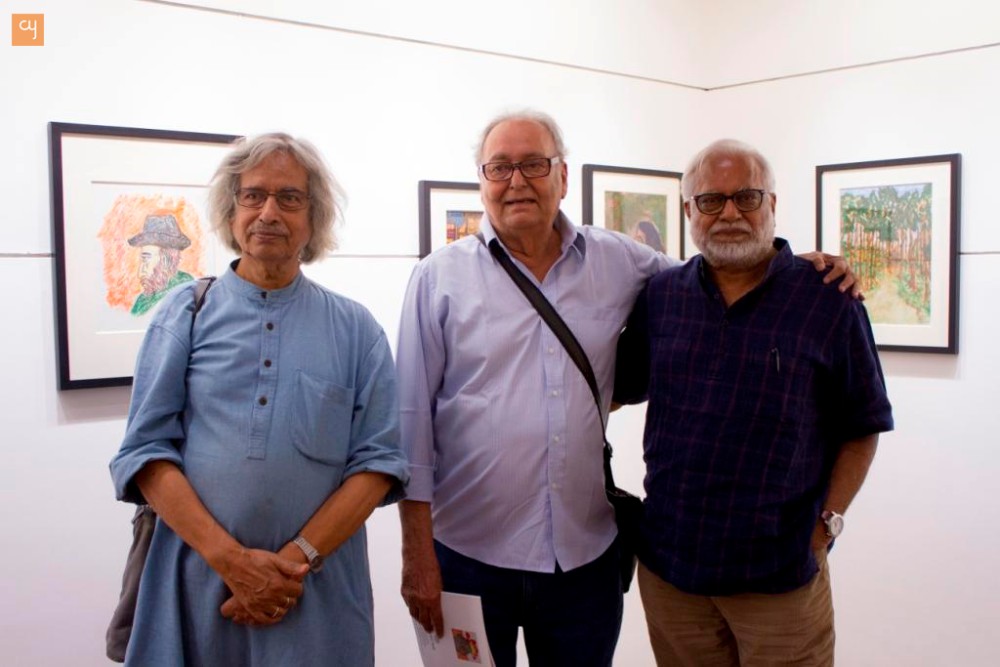 Curator Jyotirmoy Bhattacharya shared the vision for Chatterjee’s solo show, saying, “The artworks made here have been developed by Dada (Chatterjee) in the last 15 years. It was a tough task for me to select the best ones out of all the 150 approximate original artworks. I think both the veteran artists Manu Parekh and Jogen Chowdhury have played a significant role in the ideation of this show and with their support we will soon be taking this exhibition across major cities of India, including the National Capital.”

Manu Parekh who has been impressed by Bengali art since the tender age of 24, shared, “I am implicitly delighted to sit near the actor from Apur Sansar, whom I saw on 50ft wide screens in my younger days. But the reason why am I sitting here at this exhibition is because I am genuinely stirred by the pure aesthetics within his art. The simplicity in the creative citizens of Bengal has fascinated me since a long time, and I am here to comprehend that muse.” 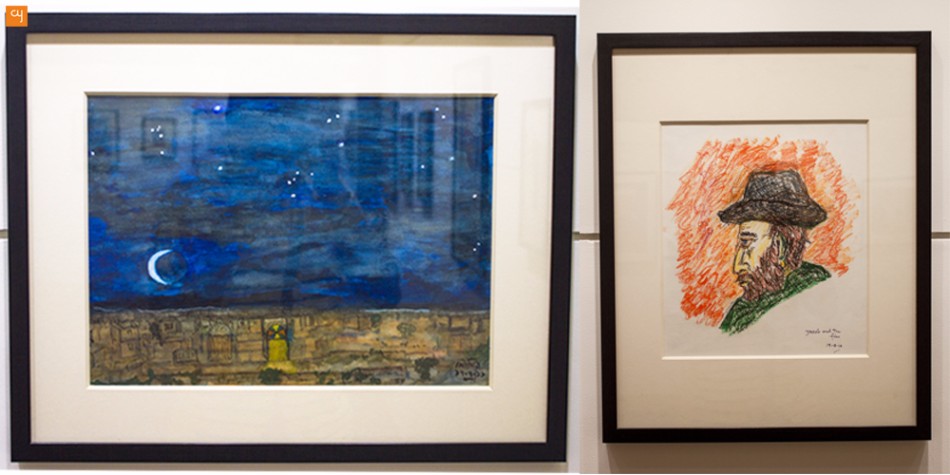 We were delighted to hear a Bengali poem in the artist Chatterjee’s own voice, who then prolonged the conversation saying, “I drew on rough pages, portraits that tickled my imaginations. I am so glad to continue the Bangla legacy of composing art on postcards, which even Rabindranath Tagore was fond of doing.”

The octogenarian artist moreover looks at art as a vent for the flood of the creativity that he has been flourishing through dramas and poems since decades. Chatterjee never realised how his pen scribbles would transform into independent strokes to form a meaningful series of subjects ultimately. Visit this exhibition to witness how steadfast efforts over time can germinate towards something extraordinarily beautiful.